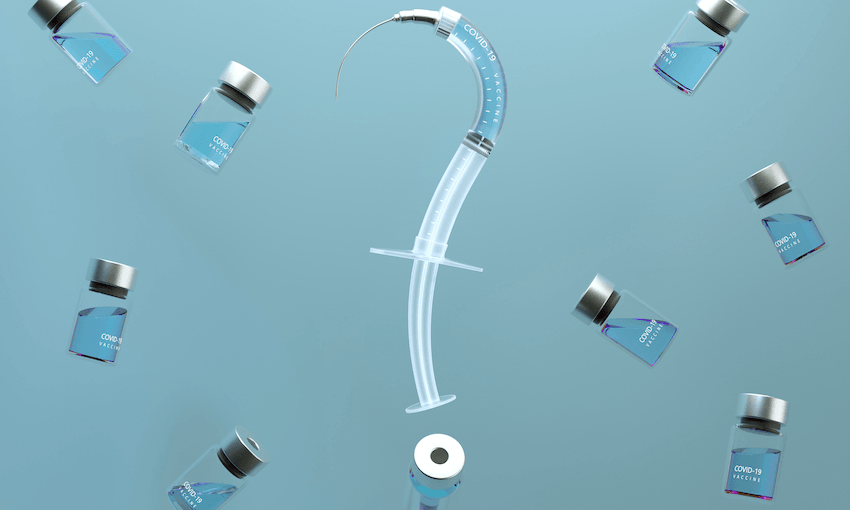 The country’s effort to get out Covid-19 vaccines has been called everything from overachieving to a dismal failure. Neither are true. Justin Giovannetti looks at the numbers in The Bulletin.

There are two narratives around New Zealand’s Covid-19 vaccine rollout. According to the government, it’s a solid plan that remains ahead of schedule and will provide everyone with an opportunity to get at least one jab before the year is done. According to the opposition, missed opportunities and poor decisions have led to a botched vaccination programme and the Covid-19 minister should resign.

The reality is probably somewhere between the two. As of yesterday, 2.9 million doses of the Pfizer vaccine have been administered in New Zealand. The country’s 4 million eligible adults will eventually need at least 8 million doses. In the past week the programme has broken daily records, with a high of 80,000 people vaccinated yesterday. Just over 1 million people are now fully vaccinated, or about 21% of the population. About another 16% of the population has had one jab.

That’s really not great. New Zealand’s vaccine programme has slowly gained steam since it started in mid-February but within the OECD, a club of 38 generally high-income democracies, we’re in last place based on the percentage of the population that has received a vaccination. Second-to-last is Colombia.

New Zealand is not last in the world. We are getting closer to the middle of the pack as some programmes slow down or falter. Unfortunately, a number of African, South American and Asian countries barely have a vaccination programme at all.

Details on the vaccination drives in every OECD country on Monday.

The details of the government’s agreement with Pfizer aren’t public. I’ve been writing about the government’s vaccine programme since it began and there’s a tremendous amount of wishful thinking online. Some have argued on social media that the slow programme is a good sign, because it necessarily means doses are going to developing countries that need them more. There’s very little evidence that is happening. Supporters of the government’s vaccine programme are adamant that the country is getting its assigned allocation from Pfizer. No such thing exists. The vaccines are ordered from a pharmaceutical giant that is looking to maximise its profit. This is not a humanitarian venture.

I wish I could tell you more about the country’s dealings with Pfizer, like how much was paid per dose and when they were purchased, as well as upcoming delivery schedules. Other countries have shared that information or it’s been leaked to local media. New Zealand’s government has maintained that its conversations with Pfizer are protected by “commercial confidentiality” and exempt from official information requests and most parliamentary scrutiny. The only real information that exists is jabs in arms.

Could New Zealand’s programme have been faster? Possibly, but the government had to meet the public’s expectations for safety, according to Graham Le Gros. He’s the director of the Malaghan Institute of medical research and is one of the country’s top immunologists. “If you cast your mind back, everyone wanted to be assured that it was safe. People wanted to see if it was safe overseas and it would have been hard for the government to move very early before it had those assurances,” he told The Bulletin.

“With the power of time, people might wish that we’d purchased the vaccine earlier or paid more earlier. But that’s not what happened. We may have been fooled into thinking that we could keep the virus away with border controls and other measures. What we’ve learned in recent months is that delta has evolved to the point that it can break through and get around. I wouldn’t want to say that we’ve been caught with our pants down, but we were caught with our pants down,” he said.

There are valid reasons we didn’t go early. According to Le Gros, New Zealand’s small population just didn’t make it an attractive buyer compared to countries like the US and UK that might have been willing to spend more per dose on much larger orders. “A vaccine company would rather make a big order, multi millions, rather than small countries like New Zealand. We were at the bottom of the queue, really,” said Le Gros.

The next chapter is really on us. His final piece of advice is to not get caught up on past decisions and to instead focus on the future. Yes the programme was slow, but doses are now coming in quickly and everyone over 30 can get a jab. By next week, everyone over the age of 12 will be eligible. “We need to now get the vaccine into as many people as possible. That’s the goal, that’s it,” he said.

New Zealand can still be the first country in the OECD to really aim for 100% coverage. Not 70% or 80%, but everyone. That has little to do with the name of the government in power or the minister signing the cheques, that’s up to us.