Having recently walked much of the South Island stretch of Te Araroa, Kirsten O’Regan reflects on the magnificent landscapes and interesting characters she encountered along the way.

On our 36th day of walking, we climb through the fire-blackened hills above Ohau, stopping to examine heat-disfigured trail markers. Fresh green shoots have pushed through the sooty earth. Some matagouri bushes escaped significant damage; tiny pale-green flowers soften their spikes and perfume the breeze.

We plunge into beech forest accented with shocking flares of red: native New Zealand mistletoe, or pikirangi. It’s the first of this endangered plant we’ve seen. The beech trees are also flowering, dropping minute maroon stars to the trail. Tītī pounamu bounce around the canopy like ricocheting golf balls, squeaking at us through dappled light.

A rangy man on a little vehicle is erecting a sign about the mistletoe in a scarlet-draped grove. He tells us, voice raised above the gentle burble of a nearby stream, that someone is just ahead of us on the trail. “A TA walker?” we ask, feverishly. He nods and we hurry on, thrilled at the thought of a fellow thru-hiker. It can only be Paul, we mutter to each other, like lunatics, as the gradient steepens. We’ve never met Paul—he doesn’t know we exist—but we know plenty about him. 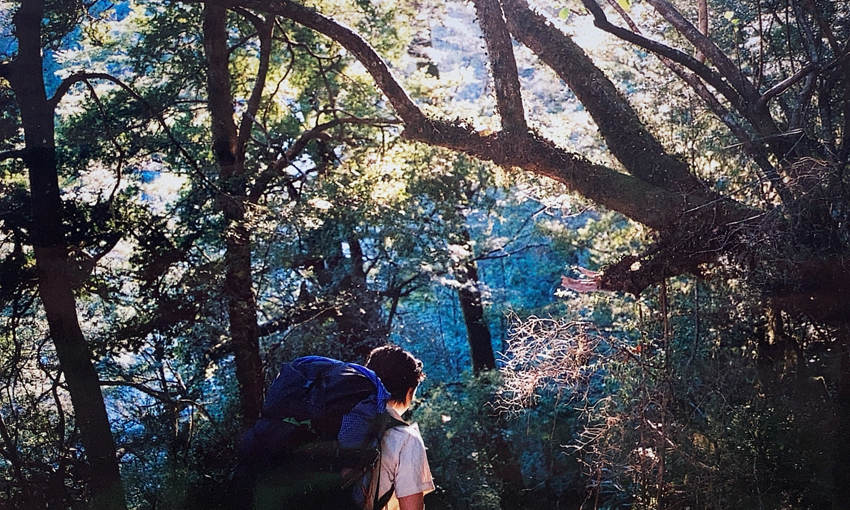 In an ordinary season, Te Araroa – New Zealand’s long pathway, linking Cape Reinga to Bluff – is bustling. We’re walking it in a not-so-ordinary season: it’s spring (we started from Pelorus Bridge in late October) and there’s a pandemic in progress.

The TA, as it’s commonly referred to, has been steadily growing in popularity since its inception in 2011. Some hundreds of thousands walk stretches of the trail each year. In summer 2019-2020, around 1,500 people hiked the entire length, 80% of them foreigners. According to Mark Weatherall, Te Araroa’s executive director, this season might see those numbers halved and the proportions flipped.

We finished walking in mid-December, hitching out from the trail to Te Anau on day 51, well before the summer rush. As we neared our southernmost section, we met a trickle of NOBOs (northbound TA walkers, those hardy contrarians) and day-trippers. In the beginning, though, we felt truly alone: for five days in the rugged Richmond Range, we met no one at all. Each evening, in cosy ex-forestry service six-bunk huts, we spread out our perma-sodden gear and lit a fire, taking our solitude for granted. 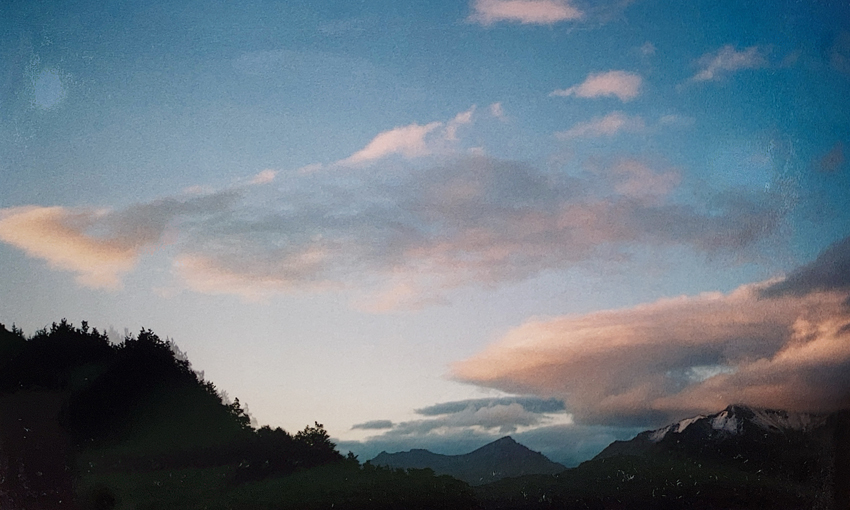 After nine days of rain, sooty mould-slicked mud, and olive oil-drenched couscous, we reached St Arnaud. The town was quiet, save for the deafening trill, boom, and screech of the korimako; in the lull before the summer crowds, the bellbirds seemed to have taken over. At the lodge, we gleefully collected our food parcel (all 20kg of it). Last season, we were told, they held 500 parcels for walkers; this season, ours was the first to come through.

In a usual summer, a ramshackle community springs up on the trail. Through the notes in the intentions books supplied at each DOC hut, we could trace relationships, wistfully imagining the comradery of being part of a cohort. But we seldom saw people during the day and were alone most nights, falling asleep to the wind whistling through corrugated iron walls. Our experience was shaped, surely, by the season we chose – the high rivers, erratic weather, and late snowfalls of spring – but also by the global situation.

By the time we meet Paul, we’ve been trailing him for weeks through the unforgiving Richmond Range, with its high ridges and red rocks; through Nelson Lakes, all dripping beech forest and blue tarns; over the passes Harper and Goat, with their papery-skinned tree fuchsia and rock-hopping ascents; on down through the brassy tussock lands between the mighty rivers Rakaia and Rangitata, and from Mesopotamia to Tekapō. In each of the intentions books, we checked for Paul – one of only two hikers who had travelled TA SOBO since the winter and the only one we had a hope of catching.

When we finally meet him, I shake his hand enthusiastically, yelling his full name, occupation, and city of residence in greeting. In this way, we make our second trail friend. 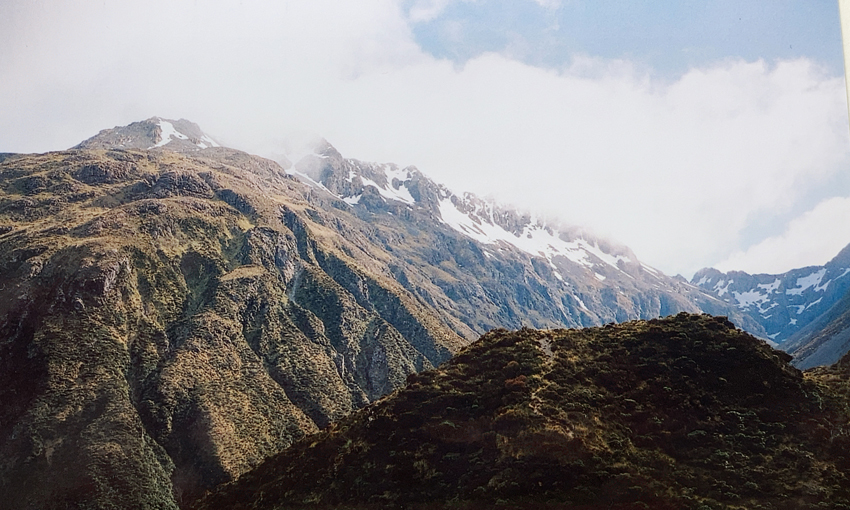 Our first trail buddy wove himself into our walk, popping up multiple times as we moved south. A blonde Swede with an enthusiasm for long days, night-time river crossings and salty licorice, Chris caught us at Camp Stream Hut (built 1898), just before Tekapō. Given his commitment to walking every centimetre of the trail (roads included), we quickly outpaced him, hitching a lift into town with a friendly Auckland couple visiting Te Wai Pounamu for the first time. Asked when their campervan adventure would end, our rescuers shrugged. “May?” came the answer, as if they sort of wanted to say, “Maybe never?”

After the sleepiness of St Arnaud, Tekapō took us by surprise, buzzing, as it was, with oldish Aucklanders and youngish foreigners. A circumscribed pool of non-New Zealanders – those who chose to stay when lockdowns rolled across the globe – are hanging out in the country, and we realise they all seem to know each other. The trippy German on a bike who comments on our cute matching outfits as we walk into Albert Town turns out to be a friend of Chris. The Queenstown hostel we have the misfortune to stay in is like a huge, terrible party flat; one label on a stack of food supplies suggests a checkout date of autumn 2021.

The internationals on the trail can’t believe their luck. Una, a super-fast, bubbly South African we encounter in the Motatapu, jokes that she’s planning to outrun immigration when her work visa expires. Raul, a delightful Spaniard with an interest in dark matter, managed to turn his lockdown around with a beautiful relationship. Germans wince at the thought of returning home. A French Canadian with a flair for imaginative intentions book entries (complete with doodles) spent 100 nights straight in DOC huts, we later learn through the grapevine.

New Zealanders, too, are taking advantage of the country’s singular position. One young couple we met were meant to be in South America but are walking their way north instead. A pair of Southland 70-year-olds are out having adventures – carrying both a shovel and a large frying pan – while septuagenarians across the globe are effectively under house arrest. We meet a school group and an Auckland tramping club, pre-teens and pensioners. “We get to be here?” we’re all thinking, incredulous. “Doing this?“ 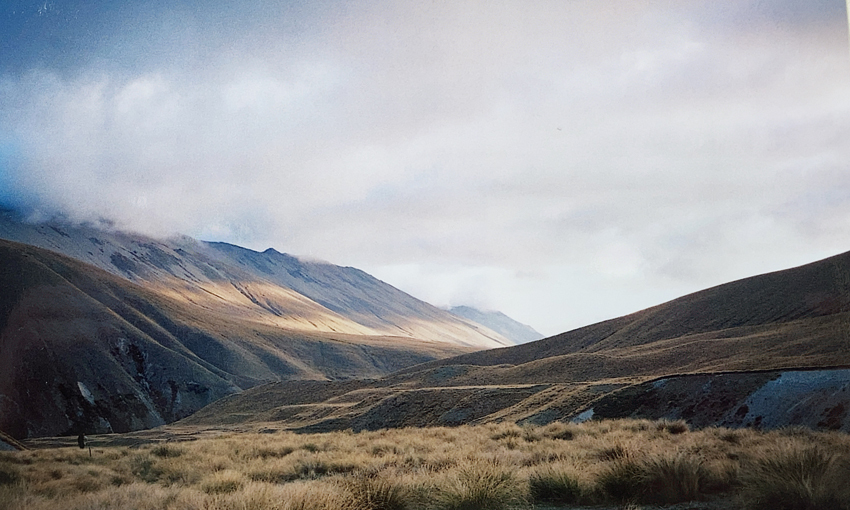 Te Anau is our last stop and we love it unreservedly: the cute cafes, the low-rise buildings, the immaculate lake with Fiordland wildness across the water. We soon realise the streets are strangely wide in order to accommodate all the tour buses that aren’t there.

Recounting our favourite days on the trail, we’re stunned anew by our good fortune: we’ve had 51 great days – possibly 51 more than most people outside Aotearoa got this year – thanks to the rational, informed approach our government took to a public health emergency.

I never knew we had a native mistletoe, and now I know we have several varieties and they’re glorious to encounter and increasingly rare. I know that possums threaten not only our birds but, along with them, whole ecosystems, including the mistletoe. I know robins follow me not because they think I’m interesting, but because my passage throws up a cloud of tasty invertebrates. I suspect South Island tuī are urbanophiles, more likely to be seen in towns than in the bush. I know how Nelson connects to St Arnaud, Wanaka to Queenstown, and the precious wilderness that binds these places together, making Aotearoa the country it is.

We’re so lucky to be out and about – that’s the implausible pulse that beats through these days. Lucky to be sharing huts with strangers and roaming as we like. But, equally, lucky to have at our doorsteps a country that’s such a pleasure to walk through. It might not always be so.

We crossed didymo-slicked rivers and saw cows grazing their banks. Over Travers Saddle, we encountered two kea and couldn’t believe our luck. On the same ascent, we saw lime-green pellets of 1080 – at once a potential threat and a powerful protector of our alpine parrots. We met able-bodied New Zealand tourists who had taken carbon-intensive helicopter flights up the ascents of Great Walks rather than, you know, actually walk them.

Our government took audacious, confronting steps to protect us from Covid-19. Now, it must take significant, likely controversial, measures to combat climate change and preserve our wilderness. We must work to ensure our tourism and agriculture sectors aren’t eroding the very natural resources they rely on, that the Department of Conservation – which controls roughly 30% of Aotearoa’s landmass and is allotted roughly 1.3% of the budget – has the resources it needs to do its work. One of the myriad ways to achieve these goals might be to support iwi-led conservation that operates from an indigenous worldview.

As we walked south, passing through the wild spaces that shape the country we call home, we were aware of both our own insignificance against the immensity of this land and of humanity’s disproportionate impact. “Whatungarongaro te tangata, toitū te whenua,” one whakataukī goes: “As man disappears from sight, the land remains.” Can we use this strange global moment to think about how we want to leave this place once we’ve passed through?