We could all stand to chill out a little bit. We’re coming out of a pandemic; we all work too much and don’t get enough rest. TV isn’t the escape it used to be; we’re either watching Kate Winslet furiously vape her way through a murder investigation or waiting for Shortland Street’s Nurse Carla to crack, as she inevitably will. Even escapist reality TV is overly stressful at this point – I’m too invested in the careers of the younglings on Popstars, too stressed out at people being mean to each other on Drag Race, and too worried that everybody is laughing at the contestants on The Apprentice. I just want some low-stakes, well made content to chill out with.

I don’t have to look far, because Māori TV has provided me with two of the most delightful series I’ve seen this year. The first, Lucky Dip, is a game show that takes the legacy of Sale of the Century and It’s in the Bag and runs down a side street with it. The second is Five Minutes of Fame, a comparatively relaxed take on the familiar singing competition genre. They’re both the ultimate comfort watches, the television equivalent of settling into a soft couch with a warm cup of tea. Don’t trust this picture: Lucky Dip is *WILDER* than this.

Lucky Dip is a show so ludicrous that it feels like somebody came up with it in the writers room on 30 Rock. It’s also as infectious as a new Covid variant, and as delightful as that text message telling you you’ve tested negative.

The series is hosted by Luke Bird, whose personality is made for fullscreen, and his cousin Marcia Hopa, who makes Suzy Cato seem doleful in comparison. The pair don’t just delight in each other’s company, but seem to be very aware the show they’re on is tremendously silly. Bird breaks into a singing voice every other sentence, and at some points, literally barks at contestants, with Hope egging him on. It’s camper than a Boy Scouts convention, and I can’t imagine anything like it airing on our other broadcast networks – which shows exactly where those broadcasters are lacking, because I’ll take personality over shine any day.

The three rounds are increasingly ridiculous. In the first, the contestants have to answer questions like “How do you spell Māori?” and “What television channel is called the Home of Haka?”. In the second and third, they have to perform a series of physical challenges that are best explained through the hallowed medium of the screenshot: My love goes out to whatever Māori TV employee had to get into a zentai and perform these demonstrations, but hey, at least they’re anonymous. The contestants have to do these things while being fully visible, identifiable by both face and name, in front of audiences in the studio and at home, while Bird screams at them. I don’t know how TV got to this point in 2021, but I’m glad to be alive at the same time as Lucky Dip.

However! The most ludicrous thing about the show, and what tells you everybody involved knows how silly this endeavour is, are the array of prizes. They’re truly, as the name of the show indicates, a lucky dip. The consolation prizes include a Māori TV tote bag, three potato peelers and a Hot Wheels, while the actual winning prizes are a microwave (Breville!, they enthusiastically yell), a watch and… a bucket hat.

At the end of the second episode, Bird wails at a contestant who has to eat an entire roll-up without using her hands, “You’re a uni student! You’re hungry!” and I think I was transported off the physical plane in that moment. I could not stop laughing, and more importantly, I could not stop watching. Let this run for as many seasons as they have Māori TV merch to give away. 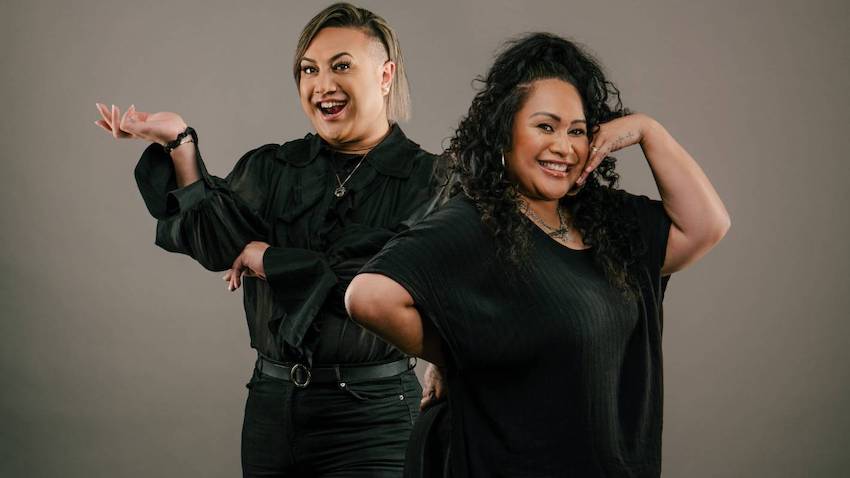 Five Minutes of Fame is a bit more serious than Lucky Dip, but what it lacks in silliness, it makes up for in a genuine wow factor. The show is a more relaxed version of the usual singing talent show, drawing from bits of The Voice, X-Factor and Idol to make up their rules.

The series pits singers against each other in four categories: rangatahi, tane, wahine, and ropu (groups). Each episode features eight performances – two from each category – from which judges Bella Kalolo and Pere Wihongi pick the best to go through to the next round. It’s like the opposite of Lucky Dip: we know the format, we get the format, and there’s nobody in a zentai trying to explain it to us or singing ‘I Have Nothing’ before the contestants come on.

The best part of the show is that its pleasures are so simple: it’s good singers singing good songs. There’s no making fun of people who can’t sing, there’s no heavily produced packages, and there’s no showboating. It’s not revolutionary, but not everything needs to be The Handmaid’s Tale. It’s goddamned nice!

It’s rare that a genuine highlight of a singing show is the pre-performance interview, but the charisma of every contestant shines in these moments. In the second episode, whanau singing group The Amazing Graces banter charmingly with each other, and while they might not be hitting the charts anytime soon, I’d much rather spend time with them than some floppy-haired lads holding guitars. It’s a little unfair to compare Five Minutes of Fame to Popstars, a show with much more money behind it, but it’s hard not to miss how the TVNZ show often feels like it’s beating the talent into shape to fit the format. This show is content to let its contestants, a mixture of rangatahi trying to break into music and veterans on the edges of the industry looking for a step up, show off who they are and what they can do.

The judges are also a huge part of why the show works. Kalolo, already the highlight of Popstars, continues to prove herself a tremendous onscreen talent. She’s warm, funny and engaged, as is co-judge Wihongi. I just wish there was more of Kalolo in the show. Much of her role involves rehearsing with the contestants ahead of their performances, and I wish we got a little bit more footage of that, rather than just the contestants gushing about the feedback she gave afterwards. I’m selfish! I just want more Bella.

If there’s anything that both of these shows prove it’s that Māori TV knows how to make TV that people actually want to watch. I entreat the powers that hold the purse strings: Give them more money. Well, maybe not to Lucky Dip, because that show seems to be making gorgeous lemonade from nearly expired lemons and I’d hate to see it lose that unhinged edge, but definitely shower Five Minutes of Fame with some more dollars. And for the rest of you? Get thee to Māori TV (which is also on demand, if you didn’t know) and watch these shows. Your stress levels will decrease, your happiness will increase, and if you actually watch them, chances are we’ll get more stuff like this, you guys!

Lucky Dip airs on Thursday nights at 8pm, while Five Minutes of Fame airs at 8:30pm on the same night. Both are available to stream on Māori TV on Demand.