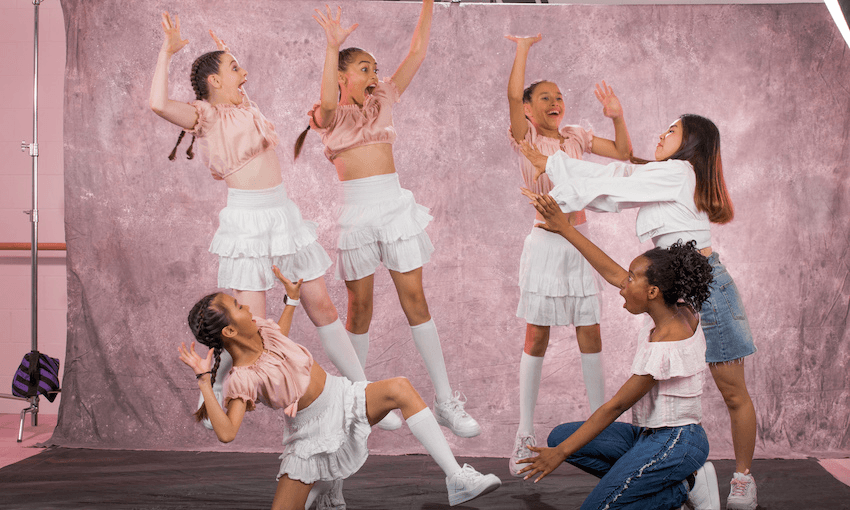 So you want to be a K-popstar? Kiwi kids get a shot at stardom in K-Pop Academy

What happens when New Zealand’s queen of K-Pop rallies a room full of kids to become homegrown popstars? You get TVNZ On Demand’s K-Pop Academy.

Korean pop music – or “K-pop” – is, arguably, the biggest musical genre on the planet. BTS is its most famous name, but South Korea is home to plenty of other huge acts, including Blackpink, Ateez and Stray Kids. Think of K-pop and you probably think of high-octane performances, impressive dance routines, artists with brightly-coloured hair, and of course, ear-worm melodies. But there’s more to making it big in K-pop than just singing and dancing. Like any art form, it requires a lot of hard work too – as demonstrated in TVNZ OnDemand’s K-Pop Academy, which follows a group of Kiwi kids as they refine their skills under the tutelage of choreographer Rina Chae, whom the NZ Herald last year dubbed “New Zealand’s Queen of K-pop”

Across eight episodes, K-Pop Academy is an entertaining way for children (and keen adults) to have fun and learn about the secrets of K-pop. We get to know the five groups – Crush, Crazy, High, Hasty and Balmsae – as they encounter the glitz and glamour of K-pop, including make-up sessions (yes, even for the boys) and styling advice.

These five groups are comprised of 25 young teens, representing Korean, Māori, NZ European, Chinese, Samoan, Indian, Japanese, African, Russian and Cook Island cultures. Some have rigorous dance experience across multiple disciplines; others have taught themselves by watching K-pop music videos online. Representation matters, and how special for our youth to find a welcome in the world of K-pop, irrespective of their background.

Of course, many of the young hopefuls come from Korean backgrounds. In episode one, fifteen year old Sam talks about the importance of K-pop in his life. “Without K-pop, I wouldn’t know who I am ‘cause K-pop is our culture in Korea,” he says. “Doing a lot of K-pop is a way I can stay in touch with my Korean culture while I’m in New Zealand.” Alongside his cast mates, Sam moves through a process of auditioning, before moving on to a two-week boot camp in dancing, singing and rapping, all in preparation for a final live performance.

Guiding them all is Rina Chae, who began her dancing career as part of the NZ Breakers cheer team. She lived in Los Angeles for five years, where she danced with the likes of Beyoncé and Justin Bieber, before moving into choreography, mostly for Korean musical acts like Monsta X, SF9 and BoA. Now she runs her own studio on Auckland’s North Shore, En Beat Dance Academy, while continuing to work with Korean acts remotely. Chae has made it big, and is now back to teach the next generation.

Speaking to The Spinoff, Chae says it’s remarkable how K-pop culture has spread across the West in recent years. “In the 90s, I couldn’t talk about K-pop or share the excitement for K-pop at all, at school, because nobody else would know what it was even about,” she says. “I used to keep my mouth shut, and keep quiet about K-pop until outside of school when I’m actually with Korean friends to talk about it. But now it can be shared anywhere and everywhere.”

And it’s true. K-pop music has increased its Kiwi following with each new release. Global megastars BTS have spent the last 17 weeks on the NZ Top 40 Albums Chart with their best-selling album Map Of The Soul:7 . Meanwhile, Auckland’s MDC dance group represented NZ at the 2019 Changwon K-pop World Festival in South Korea. K-pop is still something of a niche interest, but the net is widening all the time.

Chae hopes that K-Pop Academy can inspire young people, to show them that showbiz dreams can come true – even here at the bottom of the world. “You’re just a girl from New Zealand,” Chae recalls being told. “All that stuff happens in America, it’s not gonna happen.” But it did. And now other Kiwi artists are chasing the same type of success overseas. “We’re actually putting them forward to some of the big record labels for them to audition in person,” she tells us. “K-Pop Academy was a stepping stone for a lot of kids to think, this is possible.” While remaining tight-lipped on the agencies themselves, Chae reveals the demand for talent is there and it is real.

Watching K-Pop Academy you can’t help but groove along to the music, or catch yourself imitating the dance moves. You’ll learn valuable styling tips, like spray-painting shoes fluoro pink to achieve the best look, and you’ll probably learn something new about K-pop, too, no matter your level of interest in the genre.

Or, as New Zealand’s Queen of K-pop puts it, “If you can grow to be dope, then I got you.”

HEIHEI’s K-Pop Academy is available on TVNZ OnDemand from today.