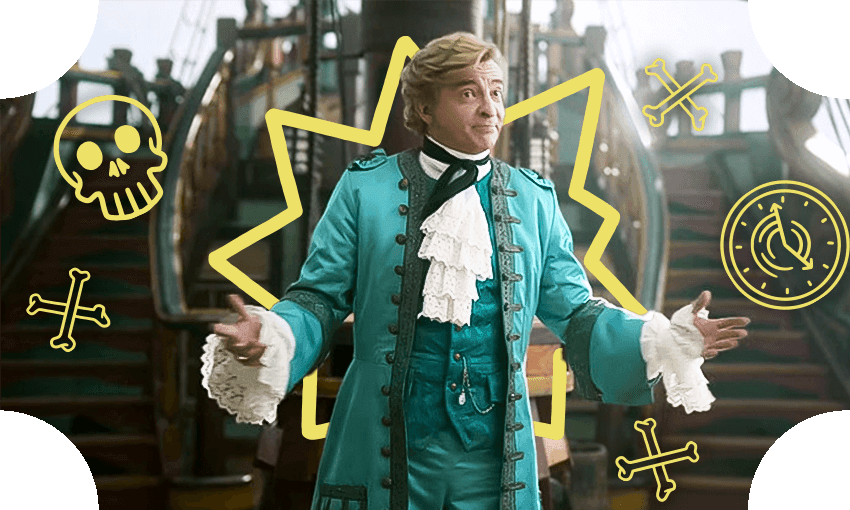 Alex Casey chats to Rhys Darby about taking the plunge into his lead role in Our Flag Means Death, a vaguely historical workplace comedy set on a pirate ship.

Rhys Darby is serving his best pirate impression, all the way from his lounge in Los Angeles. “It’s not making it all about ‘aaarrarrgh’ and ‘me hearrrties’ and ‘trrrreassssure’,” he says, raising a bent index finger towards the Zoom camera in the universal motion for “I have a hook hand”. “It’s actually about making it about the mundane – a workplace comedy about people who might be on a pirate ship, and might be sailing for weeks on end without anything actually happening.”

He’s describing the premise of Our Flag Means Death, the new Taika Waititi-produced comedy series arriving on Neon today. Darby stars in the lead role as Stede Bonnet, a real life former aristocrat who swaps gentry for piracy because his wife, according to Wikipedia, was too much of a nag. “He just decided to go and live another life,” explains Darby. “We’ve all thought about doing that, but this guy actually went and did it, and he chose the most ridiculous life to get into.”

For a guy who has done some pretty weird things in his career, Rhys Darby admits that 2021 was one of the weirdest. He filmed both celebrity unboxing show The Masked Singer NZ and Our Flag Means Death, meaning a lot of time spent in a studio, either staring at a sensual singing pavlova or rocking back and forth on a replica pirate ship. “Going into the year I didn’t think I would be doing either of those things,” he says. “People often say ‘what’s your next thing?” and I say ‘I don’t know’ – I’m this far into my career and I still don’t have things racked up.”

Although he may never know which role is around the corner, it is easy enough to look back at Darby’s career and see a few casting trends. Whether it is Murray in Flight of the Conchords, Jim Carrey’s office mate Norman in Yes Man or Stede Bonnet in Our Flag Means Death, Darby clearly has a penchant for playing hapless managerial figures. “I just love people who are out of their depth in a position of authority, and trying to get away with it,” he says.

His pre-showbiz history has a lot to do with this fascination. Having been an air force cadet in his teens, then joining the army at 17, Darby has a lot of experience dealing with strict hierarchies. “I’d been in uniforms since the age of 12 so, for me, I was always surrounded by these authoritative figures,” he explains, “but I never quite believed them when they were telling me to do things, I was always questioning – ‘how does he know that?’ – but I’d keep my mouth shut.”

When he started working part-time jobs at university, he saw that same dynamic play out time and time again. “I just loved all the people that were managing these positions I was in,” he says. “And then I discovered that’s something I was very capable of portraying.”

Another consistency with Darby is that, no matter how odd the series or movie that he’s appearing in, he will always find a way for his performance to be even odder. It is true of Psycho Sam in Hunt for the Wilderpeople, Anton in What We Do in the Shadows, and even his panelist persona in The Masked Singer, where he would repeatedly appear to be deeply confused by the format and guess with confidence that every celebrity was Dwayne the Rock Johnson.

“I think of myself as a disruptor of sorts,” he says in a sly way that I can’t tell is a joke or not. “Throw me into something and, if I don’t fit, then it’s probably a good fit.”

Our Flag Means Death is a good fit. The fish out of water (or in the case, on water) comedy series focuses much more on silliness than swashbuckling, where the captain of the ship is more interested in reading books than raiding for booty. With appearances from Taika Waititi, Fred Armisen, Leslie Jones, and Games of Thrones’ Kristian Nairn and Joel Fry, it evokes another off-kilter star-studded sea-faring adventure from the mid-90s. “There’s definitely an element of Muppet Treasure Island, because we’ve got some really wacky characters in this.

“We were able to bring to the table very interesting people and cast it well, with both odd comedic and great dramatic acting types,” he says. “Even if you watched it on mute, you’d know there were some odd things going on.”

Darby admits that he knew very little about pirate lore beyond the likes of Muppet Treasure Island before setting sail on the project. “Both Taika and I agreed that we weren’t really that into pirates,” he says. “It was more of a cheesy Halloween thing that we heard people doing in America.” His knowledge base prior to making Our Flag Means Death was limited to the Pirates of the Caribbean franchise, he says, and “birthday cards as a five and six year-old.”

Perhaps that goes some way to explaining Darby’s clueless Bonnet, a gentle soul who encourages his bloodthirsty pirate crew to express themselves through craft. “What he is good at is nurturing, reading them stories at night and being sort of a mum figure,” says Darby. “It’s similar to what I did with Bret and Jemaine, that kind of ‘it’s us against the world, guys’ feeling that Murray has, where all he really wants is to get involved and maybe get a hug.”

Speaking of Bret and Jemaine, it is hard not to feel a Conchordian energy while watching Our Flag Means Death. There’s spontaneous musical ukulele numbers, bumbling man-child antics aboard, and even a guest spot from Kristen Schaal, aka crazed fan Mel from Flight of the Conchords. Not to mention they are both made by HBO. “It’s definitely in the same realm. The comedy tone is there thanks to myself and Taika and David [Jenkins] who created the whole thing,” says Darby.

So is this the partial Conchords reunion at sea that fans have been waiting for? “It is a little bit, but I could never say that without Bret and Jemaine,” laughs Darby. “Hopefully we’ll be making the same kind of magic.”

Our Flag Means Death is available to watch here on Neon