Aotearoa, the time is upon us. Today it was announced that an eight-hour Vaxathon will be broadcast this “Super Saturday” between 12-8pm on channel 200, Three, Māori TV and Hahana. The event will include real-time vaccination data, prize draws and everyone’s favourite combo of people: celebrities and health professionals.

Fronting the event will be a litany of talent from the Three stable including Mike McRoberts, Patrick Gower, Jesse Mulligan and Kanoa Lloyd, and more surprise guests. At the 1pm press conference this afternoon, prime minister Jacinda Ardern teased “a bit of nostalgia” and some “healthy competition” between towns.

Here at The Spinoff, we want more than that. Aotearoa has a rich history of live television tomfoolery, so what better time to return to the archives and see what else we can drag from the past into the pandemic present? Here is our list of expert recommendations for the historic broadcast.

The best part of The America’s Cup yacht racing (it was this year, people, THIS YEAR) was the awe inspiring moment when legendary singer Sir Roderick Stewart beamed in from the River Thames to serenade the nation with his classic New Zealand rock anthem, ‘Sailing’. Who says miracles can’t happen twice? Rock the dock, grab the jab, thank you and goodnight. / TW

“Thank you very much for your vac-ci-nation”

As Tara Ward wrote earlier this year, this tune ​​”would wake you from the deepest of slumbers, a joyous anthem that crawled into your earhole at 3am and refused to leave again.” Since 1967, some variation of this ditty has periodically floated back into our public consciousness, from the Roses ads to National’s 2005 election campaign. Will “thank you very much for your vaccination” slap harder than “thank you very much for your high taxation”? Only time will tell. / AC

The Block NZ houses are auctioned LIVE on Vaxathon

Covid-19 lockdowns mean The Block NZ houses can’t be sold at auction, which makes Vaxathon the perfect time to finally chuck these puppies on the market. Throw some scrap A4 on a clipboard and attach a biro on some string, and voila, we’ve got ourselves a silent auction. Is it legal? Who cares! Last bid at 8pm wins! / TW

We’ve plodded our way through so many history-making moments in this pandemic that we’ll probably forget this is also the era we brought the dinosaurs back. Whether it was jiving in a line outside a vaccination centre or presenting the weather on Breakfast, there’s room for dinosaurs in this national conversation and also: Tyrannosaurus vax? Is that something? I haven’t slept in weeks. / AC

This guy from Police Ten 7 does anything

Nobody brings the party harder than this guy in Hamilton, who went moderately viral after a particularly enthusiastic appearance on Police Ten 7. Anyone willing to make the bargain “if I pull a bag of sugar out, will you put me on TV” deserves to be a part of this historic live television event / AC

Everyone does a celebratory conga around the vaccination centre

It’s not a telethon/Vaxathon without one of these iconic dances, but can you do a conga line if you have to socially distance? Isn’t that just…moving? The entire success of Vaxathon rests on this issue, and the sooner someone asks about this at the 1pm press conference, the better. I nominate Suzy Cato to kick things off. / TW

Martin Henderson does the worm, again

Speculation was rife about the return of Ferndale’s prodigal son to the long white cloud earlier this year, and who’s to say he ever left? If Henderson is still on home soil, I would like to issue a civilian’s mandate that he head along to Vaxathon with the sole purpose of doing the worm, just as he did in 2009, to support this worthy cause. / AC

Hilary Barry turns up for a Chocolate Fish lolly scramble

The Seven Sharp journalist has been running a valiant Vaxathon of her own, mailing hundreds of chocolate fish to New Zealanders who got their first vaccination last weekend. A chocolate fish makes everything better, so fingers crossed that Hils Baz puts on a controversial top, climbs into the helicopter of her public health dreams and releases a delicious waterfall of chocolate treats upon on the folk below. A super Saturday, indeed. / TW

Continuing with this fantasy scenario where everything is made up and network contracts don’t matter, the Breakfast team could grapevine their way over to Three and wow the nation with their well-oiled dance routines. / AC

Everyone sings a lovely song in a choir of five million

Joy in our hearts, song in our throats, antibodies in our arms. / TW

The aerobics lesson was a Telethon staple, so why not get the good people of Aotearoa into a frenzy with the above Jump Jam routine set to the wickedly talented Black Eyed Peas? Then, once everyone is vaxxed, we can use the 15 minutes of observation time to watch this wonderful episode of Scratched. / AC

The Mad Butcher raffles off a meat pack

Is there anything more New Zealand than chops and charity? Not this Super Saturday, mates. I’ll take two tickets, please. / TW

David Seymour does his Dancing with the Stars routine 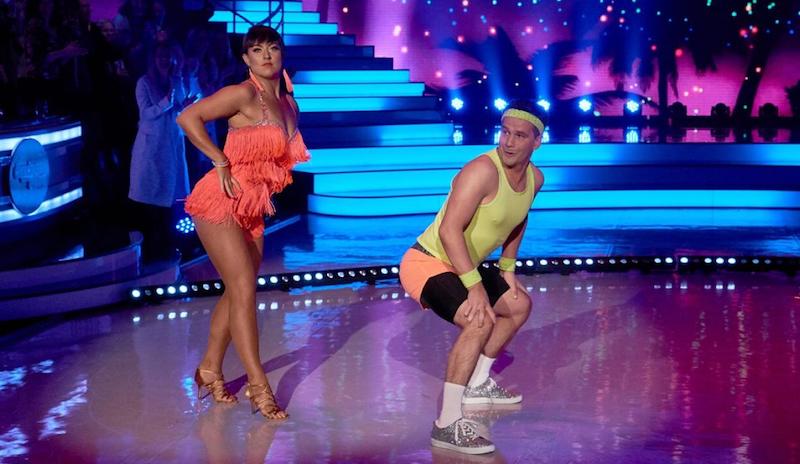 The Masked Singers get vaccinated and dance like nobody’s watching

The Masked Singer NZ was Three’s flagship reality show for 2021, so what better way to encourage people to feel better about the Covid-19 vaccine than to watch a giant orange roughy and a green alien singing “whip it, whip it good”, get the jab? A bonkers idea for a bonkers time, which means it makes total sense. / TW