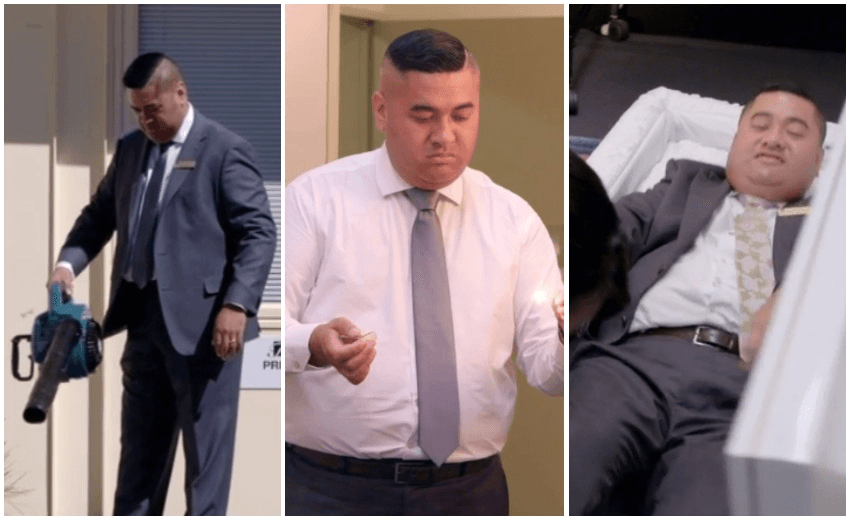 A list of times The Casketeers nearly buried me alive

With the coffin lid closing on the first season of The Casketeers, Alex Casey looks back at some of the greatest comedy moments from the TVNZ reality show.

You haven’t truly lived until you’ve seen a makeup tutorial for a corpse. Francis Tipene is hunched over a casket, Thin Lizzy brush in hand and tongue wedged between teeth, as people wail in the background. It’s one of the many devastating, surreal, fascinating scenes that made The Casketeers such an incredible addition to the TVNZ lineup, a docuseries following the employees of Tipene Funerals, a plush funeral home in Onehunga.

It’s not often a factual series can oscillate effortlessly between devastating grief, wild fart jokes, cultural differences and the intricacies of afterlife makeup in the space of 22 minutes. You’d even be forgiven for thinking it was scripted in parts, be it the heartbreak of a death within the Tipene family or the incomprehensible nightmare of bodies getting mixed up. With the first season finishing up over the weekend, I picked up some of the most ridiculous, 100% real storylines that could be lifted out any workplace sitcom you fancy.

The one with the leaf blower

Francis lives for his leaf blower, even if it doesn’t blow half as loudly as his own farts. Taking several trips a day to the carpark with his beloved Makita to banish all pesky leaves, what Francis really aspires towards is a big boy backpack blower, just like the guy in the cemetery has. “I didn’t know anything like this existed” gasped Francis, gusting foliage around the peaceful cemetery in an exceptionally disruptive way.

“Is it okay that we’re blowing the leaves onto the graves?” he says, never to be not-haunted again.

The one with the stolen biscuits

As surreal as it is to imagine an insatiable biscuit bandit infiltrating a building full of dead people and noshing down on an old bag of Farmbake’s finest, this is yet another crucial, surreal plotline that nearly sent me six feet under. Attempting to answer the age-old conundrum re: who stole the cookie from the cookie jar, Francis confronts Fiona at a staff meeting and later accuses Logan of the heinous crime. His face tells a thousand stories.

“This path of deceit consumes us all” says Francis, deadpan, before admitting that his hands are not clean either. “Time to time I find myself hungry, a monster, and I steal the cookie from the cookie jar.” These are his confessions, part two.

The one with the very stinky hallway

“It’s distracting” says Francis, waving a lit match around his head like a priest mid-exorcism, “trying to grieve and smell poos at the same time.” In a groundbreaking scientific exploration for the ages, Francis sees just how many matches one man needs to light before his funeral home hallway stops smelling like faeces. Spoiler alert: it’s more than five.

The one with whatever the hell this is

The one where Francis lives out my dream

Look, I’ve always wanted to sleep in a coffin. It seems comfortable and extremely safe from any ghosts, moths and ghost moths caressing your bare leg in the night. For Francis, my dark twisted fantasy is an everyday reality, as he diligently road-tests every coffin that comes through the doors of Tipene Funerals. “It feels really beautiful,” he says, straightening his tie as he settles into yet another Big Sleep. “This pillow under my head? Auē.”

The one with the weight loss pill

Although later in the season, Francis takes to simpler weight loss methods like cutting down on butter and buying a bigger suit, in episode one he was getting desperate. Biffing weird fat burning pills at his employee Fiona, it’s a modern miracle that he didn’t get put in a casket himself. “It’s not that I’m shallow, I just don’t want her to die,” says Francis. “The only thing that pill gave me is diarrhea,” says Fiona.

The one with the bad white van

Everyone knows there is no better way to show your favourite employee that you value their expertise than by buying them a shitty dilapidated $1300 murderer’s van. “Hell to the no,” says Kaiora, “It’s cheap, it looks crappy, it’s not Tipene style.” So what did Faliki – the proud owner of a new, very old van – think of his generous gift?

Things are not to last. Faliki promptly blows the gasket (while also learning to drive a manual, something he had never done before) and the van is sent to the pearly gates of the car wreckers. “Most cases we lower bodies, in this case the van was uplifted.” A touching end to a terrible, terrible gift.

Long live The Casketeers. Unlike the scary white van I really hope we see you again sometime soon. Amen.

Click here to watch The Casketeers on TVNZ Ondemand