The Block NZ’s ninth season had been a relatively quiet one so far – until last night’s episode, which brought the sort of drama no producer could have dreamed of.

Covid-19 landed hard on The Block NZ last night, delivering us a level of unexpected drama that no wacky slip-and-slide challenge could ever match. Filmed on 23 March 2020, the day prime minister Jacinda Ardern announced a level four lockdown, this was the most unpredictable the renovation series has ever been.

Usually The Block NZ runs to a rigid schedule, filling four and a half hours of television every week with teams choosing the perfect shade of green or incorrectly guessing what time Resene closes. The drama is mostly low-key, real world events rarely penetrate the building site fence, and the teams live in an all-consuming bubble of Pink Batts and semi gloss. These contestants barely have time to sleep, let alone deal with a pandemic. 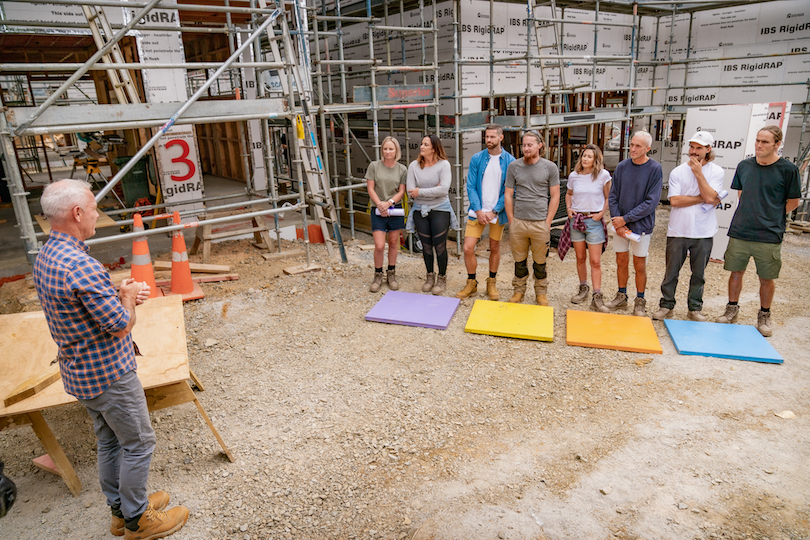 So while we panic bought toilet paper and watched the world shut down in March last year, the four Block NZ teams soldiered on with their Point Chevalier mansions, mostly oblivious to the global escalation of Covid-19. “We haven’t really had time to watch the news,” contestant Janah said, as site foreman Peter “The Wolf” Wolfkamp asked everyone to wash their hands and stop hugging their tradies. Still, host Mark Richardson continued with his pointless challenges and Briscoes had a sale, so The Block NZ’s world continued to turn.

Things changed quickly. Sunday night’s episode was the first time Covid-19 directly impacted the show, when judge Chris became unwell and missed the room reveal judging. “He’s self-isolating,” Mark said, and everyone nodded, because self-isolating was a thing now. Fellow judges Ann-Louise and Lauren kept calm and carried on, awarding the weekly room prize to Tim and Arty’s all-white kids bedroom. The winning room featured an empty jar on a bedside table and a TV jammed into the wardrobe. These really were extraordinary times.

But by Monday, The Block NZ couldn’t ignore Covid-19 any more. This was the last episode filmed in 2020, and it captured the uncertainty and anxiety we all felt during that weird, scary week. Often the biggest worry of Bathroom Week is whether the toilet matches the tiles, but suddenly families were more important than framing, and getting home safely was everyone’s priority. Dan and Meg made the tough decision to leave The Block NZ early.

Nobody felt this more than Cantabrians Dan and Meg, who began last night’s episode by deciding to leave Auckland to return to their sick daughter. They assumed the show would carry on without them, but only a few hours later, The Block NZ was done. New Zealand was in level three with lockdown coming in 48 hours, and the entire production was closing. It was a “tools down” like no other. After the teams and tradies left, a lone Wolf secured the building site, probably heading straight home to whip up a delicious sourdough starter.

It was arguably the most dramatic day we’ll ever see on The Block NZ, and yet it was over in 25 minutes. The Block Australia had a similar experience in March 2020, but chose to stop production before lockdown was announced, giving crew more time to film a cohesive farewell. Presumably The Block NZ was caught on the hop, and the footage speaks to the speed of the change. There’s no group announcement or massive drama about the site shutdown, but watching the teams’ quiet shock as they process the information packs an emotional punch. Locking up for lockdown.

But it seems nothing can stop The Block NZ, and last night’s episode ended with the teams returning to Point Chevalier in April 2021. In the year that passed, the housing market exploded and the exterior of the Block houses were completed, so you could argue Covid-19 put the show in a better position than when it started. Tim shaved his moustache, Janah left and was replaced by Rachel’s mate Connie, and there’s not enough tradies, but otherwise it’s business as usual. It’s still Bathroom Week, and there’s still four and a half hours of television to fill. In typical Block NZ fashion, it feels like we never left at all.

It’s strange but powerful to watch those first days of Covid-19 play out on prime time television over a year later. With the pandemic still a threat and Wellington sitting in level two, these episodes capture the beginning of a wild ride. It’s a snapshot in time that takes us right back to March 2020, and while other reality shows work around Covid-19 without acknowledging it, The Block NZ hits it head on. Covid-19 was the TV jammed into The Block’s wardrobe, and somehow, they made it work.