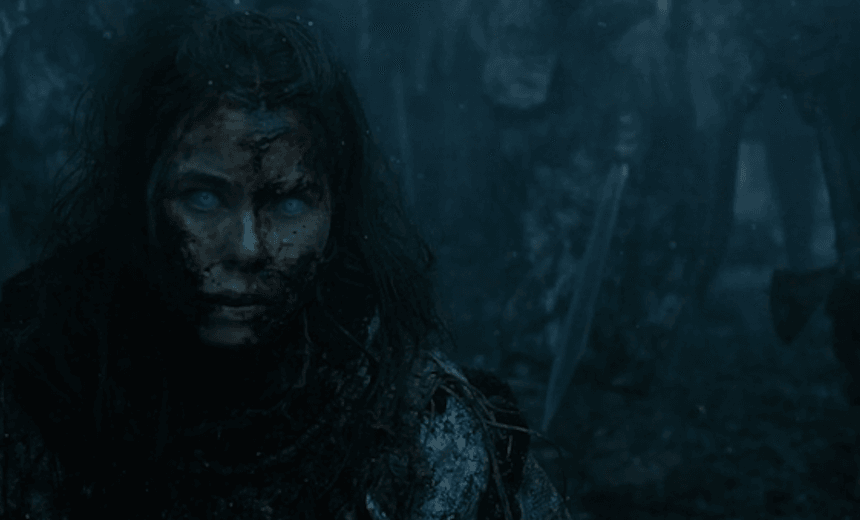 Hayden Donnell looks into the oozing ruptured abdomen of Game of Thrones and tries to discover how to make it through this doomscape alive. Contains endless spoilers, obviously.

Game of Thrones is trying to inflict as much emotional and physical harm on you as possible. It wants to teach you that good guys don’t always win, that honour doesn’t pay, that society oppresses people in terrible ways, and it’s determined to keep teaching until your ears bleed.

Everyone you love – your friends, nice sword fighting teacher and the wolf that tolerates you – all are probably going to die. Thrones overlords David Benioff and D.B Weiss will stalk like the nun shadowing Cersei on her walk of atonement through King’s Landing, dinging a bell and shouting ‘shame’ every time you allow yourself a hopeful thought. They won’t stop until you’re either literally dead or as dead inside as the ice zombies lumbering their way to Westeros.

Despite that, there are ways to survive in Game of Thrones. Secret ways. Safe ways. I alluded to them on Tuesday, following Jon Snow’s possibly-fatal case of being stabbed 47 times in his small intestine. They take sacrifice, commitment and, above all, a flatlining libedo. But they work. And if properly employed, they may keep you alive until the end of A Dream of Spring.

Love is an Iron Throne-sized deathtrap. Romantic thoughts are heralds announcing the end.

Robb Stark fell in love. He was killed at a wedding along with his wife and unborn child. Jon Snow loved a wildling lady. She was shot through the heart by Olly, the Night Watch’s squinty child butler. Olly went on to stab Jon Snow in the heart. Sidenote: Olly sucks. Renly. Khal Drogo. Jorah Mormont. Myrcella Baratheon. All dead or dying because of love – the ultimate siren call luring you into the cold arms of death.

Invest in chainmail pajamas and a sturdy single bed. At least you’ll stay alive. Which leads me to…

Congratulations, you’re getting married! Throngs of guests are assembled before you at the palace courtyard in King’s Landing. Dwarfs are mock-jousting. What fun! Doves are flying from the cake. Hooray! What happens next? Some annoying guest slips poison in your wine, leaving you to bleed from your eyes and die.

OR ATTEND A WEDDING

Now you’re at Riverrun. A feast is spread before you. You look over at your bannerman Roose Bolton. He’s smiling. Wait. Why is he wearing chainmail? The band is playing The Rains of Castamere. Isn’t that Tywin Lannister’s song? Why’s that guy got a knife? No! Ow. Ow. Ow

Also, to be safe…

This is a picture of the wildling warrior Karsi ushering her children to safety in Hardhome.

This is a picture of her 30 minutes later.

Here’s Barristan the Bold in warm conversation with his queen: a surprisingly tender, lingering scene for a background character.

Here he is dying in an alleyway approximately 31 seconds later.

The lesson is that if you are caught on camera in a meaningful or moving interaction with another human, you should make sure you’ve made a will, because you’re fucked.

Not convinced? In episode four of this season, Stannis spoke to his daughter Shireen about how he refused to accept her impending death when she was struck with greyscale as a child. He called in every maester in the seven kingdoms. Even when she was maimed, close to passing away, he refused to give up on her, because she was Shireen of House Baratheon, and she was his daughter.

A few episodes later he burned her at the stake because he was annoyed at it being snowy.

Why do people want this job?

SERIOUSLY, DON’T EVEN TRY TO BECOME A KING

DON’T BE A WOMAN

This is a tough one for a few people to accept, but it’s becoming almost non-negotiable if you want to get through Game of Thrones without being murdered or tortured. If you must be a woman, don’t be one that is invented specifically for the TV show. That path is certain death.

DON’T BE A STARK, BECOME FRIENDS WITH A STARK OR SERVE A STARK

Don’t go anywhere near a Stark! You will die.

Now go. May the Seven watch over you, and give you fortune on your travels.

Hayden Donnell is digital editor for excellent new nightly news show Newsworthy – read more from him and them here.