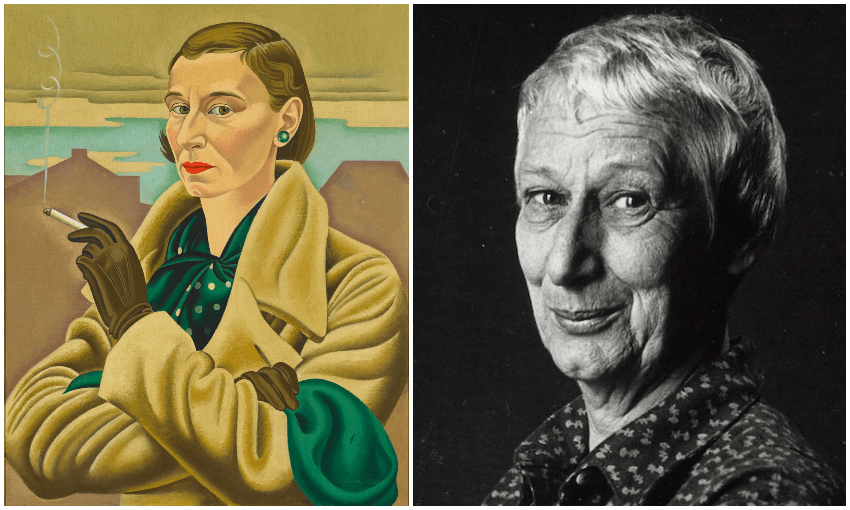 In 2020 the Royal Academy of Arts in London opens the exhibition Rita Angus: New Zealand Modernist. It’s the first-ever show of a New Zealand artist in an institution that dates back to the days of Captain Cook. And it all came about because of a railway shack.

I first saw Cass, in the art room, at Western Heights High School, last century. We sat in rows, facing the slide projector, the school field, out the window behind us. Our art teacher told us it was about New Zealand’s geographic isolation – about loneliness.

The class giggled but his statement was also true.

Now I can’t see Angus’s painting of a small wooden railway station in Canterbury, near Arthur’s Pass, without hearing that voice of dissent from the back of the room, but to look at Cass – even in reproduction as our class did that day – is to know you’ve witnessed the fullness of an artist’s vision. Angus has brought mathematical precision to bear in the controlled hard-edged outlines of those barren hills, that railway shed steeped in shadow and flanked by dark pines, and yes the loneliness is there too. But not for long.

Cass was first exhibited in 1937 priced at eight guineas and didn’t sell. In 2006 it was voted New Zealand’s greatest painting by viewers of the TV show, Frontseat. Cass is now a key pit stop, on route through a tour of New Zealand’s colonial art history. It’s a must-see painting, so it’s funny to think of all the people who haven’t seen it.

Like Adrian Locke, the senior curator at the Royal Academy of the Arts in London. Locke first saw Cass at Christchurch Art Gallery on a short trip to New Zealand in 2017. At the time, he was here on a research trip for Oceania, then the Royal Academy’s major upcoming exhibition on the histories of the Pacific timed to mark 250 years since Captain Cook’s first voyage to the region.

Locke said of Cass, “I was very struck by the beauty of the landscape and the sensibility. It was very accomplished but the aesthetic also felt very much of the time.” Locke asked around: “Who’s Rita Angus?”

“Projects like this come about because of relationships,” says Charlotte Davy, head of art at Te Papa. The relationship between the Royal Academy and Te Papa developed during work on Oceania; Te Papa lent taonga to the exhibition. Davy vividly recalls first meeting Locke at Whitebait restaurant. He’d just arrived from Christchurch and told her, “I saw this painting!” She figured out he was talking about Cass. Te Papa Press had one last copy of Jill Trevelyan’s 2008 biography Rita Angus: An Artist’s Life in stock. Davy sent the book to Locke.

So who is Rita Angus? The artist provides her own compelling answers to that question in her self-portraits. In one started in 1936 – the year she painted Cass – she’s that woman smoking a cigarette in a fabulous scarf. Her matching outfit says it all, camel-coloured coat, leather gloves: I mean business. She’s already separated from her husband, the painter Alfred Cook; in 1939 they’ll divorce. She’ll never remarry. In the painting, her hair is in a modern bob. Her nose a sharp line, lips red, sideways gaze: blunt. In a letter to Gordon Brown, Angus wrote, “I, as other painters do, live to paint and paint to live.”

A feminist, a socialist, and a pacifist, recognition for Angus’ came relatively late in life. Her first solo show was at 49 years old.

Jill Trevelyan, her biographer and co-curator of the upcoming exhibition, explains. “Angus was a pioneer of modern painting in New Zealand in the 1930s and 1940s, alongside artists like Colin McCahon, Toss Woollaston and Doris Lusk. That generation had to have amazing dedication and determination because there was no infrastructure for the arts; no dealer galleries, no arts council grants, and so little interest in their work.”

“Next year, when the Royal Academy show opens, its actually 50 years since her death, which is a lovely confluence,” Davy says. “A lot of people have active memories of her that they want to share with us and I love that.”

Since news of the exhibition has been announced, Te Papa has been fielding calls from the public all dialling in to offer their own Rita Angus works for consideration. No complete catalogue raisonné exists of Angus’s work. In her lifetime, Angus was also notoriously reticent to sell her own work. The exhibition will include over 70 works including iconic paintings such as Cass, Rutu (1951), and Cleopatra (1938), alongside many watercolours.

Davy says, “The goddess works are gobsmacking like Rutu in which she paints herself with brown skin. And these paintings contain an amazing sense of the Pacific, at a time when New Zealand didn’t even faintly identify with being a Pacific nation.”

Davy is keen for a new generation of young women to engage with Angus’s legacy. “At the moment we are riding a very fabulous wave in the world of art history about gender rebalance, and a second rebalance – I hope – is happening too around the northern-southern hemisphere split. Northern hemisphere institutions like the Royal Academy are really opening themselves up to looking at other art histories.”

Locke, a curator with specialist knowledge of the art of Mexico, agrees. “The Royal Academy has a long tradition of highlighting such artists whose work has made significant contributions not only to burgeoning national art histories but also to the broadening history of art.”

His upcoming catalogue essay for the show examines Angus’s work in relation to international modernism. “I think she compares very favourably to other pioneering women artists of the early 20th century particularly when you realise that she did not travel abroad until she was an established artist.”

In 1958, at 50 years old, Angus made her only international trip to London. It took a month by ship to travel there and back. In London, her confidence was momentarily knocked. She saw Jackson Pollock at Whitechapel Gallery and “it just blew her away,” Trevelyan says. “How could she ensure her work stayed relevant in an art world spiraling in different directions?” Yet the trip fuelled her ambition for the 1960s, a decade when she produced larger oil paintings like Fog, Hawkes Bay (1968-69).

“There will never be another solo exhibition of Rita Angus’ works in London. This is her moment,” Trevelyan says.

Many private collectors are lending works to the show. “People are so excited about this opportunity for Rita. These paintings belong in people’s homes and will leave a big gap when they go away.”

Earlier this year, Locke and Trevelyan took a road trip, driving from collector to collector as they developed the exhibition. But their visit to the site of Cass was last minute. “I wasn’t sure I wanted to go there,” Trevelyan says. “Places that are mythical live in your imagination. You have this vision of them.”

They walked around “on this bitterly cold day” looking for the view Angus had painted and trying to piece it together. “You could see the way she’d stitched together the different components of the landscape manipulating scale and distance to create a dramatic and compelling painting. Improving on reality!”

When Rita Angus: New Zealand Modernist opens at the Royal Academy it will partly be landscape that draws audiences in. “So many people here have family connections with New Zealand,” Locke says. “Not that long ago when someone emigrated unless they returned home the only contact with their family was through correspondence. For many, New Zealand is close to their hearts but remained out of reach.”

As I worked on this article, one friend kept insisting that Angus could now be called out for blackface in her painting Rutu. Even the critical reception of Oceania in Aotearoa’s art community has been mixed. Yet Angus’s paintings endure. In another letter to Gordon Brown, she wrote, “You have been trying to make me into a legend. I am a painter and paintings are paintings – line, tone, form and colour – you cannot make a legend out of a painter.”