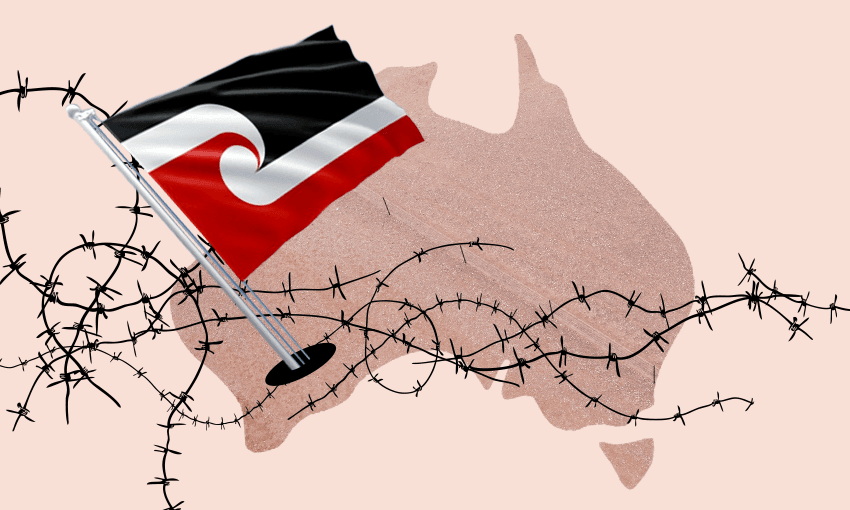 Once were one colony: 501 deportations and the history of Māori in Australia

With a new Australian government comes revived hopes for movement on section 501 deportations, a policy that disproportionately affects Māori in that country. One big hurdle? Australians’ ignorance about the impact of colonialism in Aotearoa, says Mat Henderson (Ngāpuhi).

I am descended from a Ngāpuhi shearer who migrated to Australia 110 years ago and share my kōrero with you today from the lands and waters of the Gadigal Nation where my whānau have lived for three generations. The first parcels of land stolen by Britain were granted to Royal Marines in 1792.

I acknowledge sovereignty was never ceded.

Always was. Always will be Gadigal land and waters.

The history of Māori migration to Australia is a long and spirited one. Māori were among the first migrants to say “not cool” to the white Australia policy. My tupuna was one of them. He came to Australia in 1910 as a shearer and alongside our Australian First Nations brothers and sisters worked in indentured servitude and built Australian colonial wealth (and fought in its wars).

Any story of migration is a story of push and pull factors. For tangata whenua, it’s mostly push.

Many of the early Māori migrants to Australia were pushed from Aotearoa by the jarring shock of dispossession, after the British interpreted the Treaty of Waitangi like a Choose Your Own Adventure book. Chuck in the effects of grossly unjust and erratic Native Land Court decisions, and it’s clear why so many set sail across the Tasman – and why it’s unconscionable to refer to those people as mere economic migrants to early Australia.

The same is true for all subsequent waves of Māori migration. The consequences of the original loss of possessory title to lands and waters in Aotearoa is a root cause of the intergenerational disadvantage experienced by Māori. Australia has always been a place where this unique class of migrant has sought stability and the chance to build a life.

Thing is, Australians have a weird thing about treaties with their own First Nations peoples. Many of them can’t quite grasp the following basic proposition: if ownership of land changes hands by way of guns, germs and steel, and not by way of contract and consideration, then the only way you can square away your occupation of that land is by way of a treaty. Or you can keep your head in the red sand for 234 years, as all past Australian governments have done.

Although hopes of a genuine treaty are now visible on the horizon with the election of the new Albanese Labor government, the vast majority of Australians can’t grasp the legitimate argument that Māori Australians were pushed here by the effects of another treaty, one where one party is in constant breach. Many Aussies genuinely think of Waitangi Day as a Kiwi version of Australia Day, commemorating nothing more complicated than Captain Cook crashing his dinghy into a New Zealand jetty sometime in the late 1700s.

Australians, overall, have similarly not cared all that much about section 501, the law that allows NZ-born residents of Australia to be deported back to New Zealand – a country they often left as children and do not know at all. Both major parties took a policy of maintaining the status quo to the recent election. Both parties also agreed that charging deportees the costs of their own detainment at AU$450 per day was a capital idea. If that sounds like lumping poor people with insurmountable debts as a future deterrent from ever seeking to enter Australia again that’s because it is.

The mass incarceration of people who wouldn’t ordinarily be (or remain) in detention has generated a bustling little micro economy. But it’s the money of 501s and their families who are feeding it under a very unfair set of circumstances.

Something is way out of balance in our collective spirit/wairua due to this mass deportation madness. It needs to be remedied. As part of the broader legal team now reviewing (and soon to act upon) the treatment of section 501/116 detainees within the rubric of Australia’s obligations under various international human rights treaties, we plan on remedying this imbalance. Many countries deport people who have been convicted of serious offences with no ties to their jurisdiction, but Australia has built up a process that is running on an industrial scale that mainly deals with people with minor offences and who have strong ties to Australian society. These deportations destroy families, often penalising the women and children left behind.

That’s the modern Australia that Māori are migrating to.

No matter how old or recent the Māori migration to Australia, the theme of being in Australia mostly out of necessity (or necessity of opportunity) holds true. You can’t gather the wealth of the land and waters if both were stolen, conned or extorted from your ancestors. In Aotearoa, sovereignty was fudged and massaged by people who spent a few days writing the Treaty of Waitangi, then decades selectively enforcing what its words mean at the end of a musket barrel or in the face of chronically disadvantaged tamariki.

Maybe those early Māori migrants to the New South Wales colony were simply trading one form of colonialism for another. In Australia, in the absence of pā and any land ownership borders discernible to the European mind, Captain Cook just nicked sovereignty from Australia’s First Nations, like a kid might walk into a dairy and pocket some Pineapple Lumps. The Brits didn’t even try to feign a good faith agreement with local mobs. With the Union Jack raised and sovereignty claimed, everywhere that Europeans went they owned outright with no haggle room over a mistranslation. These days things are changing, albeit very slowly. Outright ownership of Country is now subject to native title and you’re probably reading this soon after the 30th anniversary of the Mabo Decision, which overturned the legal fiction of early Australia as “terra nullius”.

What’s certain in the age of section 501 visa cancellations and deportations is that it’s impossible to ignore the disproportionate number of Māori caught up in Australian immigration detention and deportation. It’s also undeniable that there is a great amount of misinformation about who is affected by the policy. New opposition leader Peter Dutton has bragged of using section 501 to “take out the trash”, by deporting thousands of seriously hardened and irredeemable criminals since the law was introduced in late 2014. In fact, many people are being deported for low level (but repeated) drug crime and driving offences. The 501 policy applies primarily to non-citizens who have spent at least 12 months in prison, but time spent sentenced to residential drug rehabilitation is being tagged onto actual time in prison, lowering the threshold for the types of offenders being captured by section 501 visa cancellation.

Australian society loves Māori while they have a good sidestep but if you get injured playing park footy or on a dangerous worksite, there is little aroha for you here – even less if your work injury requires surgery, which then requires painkillers. What if a person can’t get off those opioids and falls into addiction and crime? What if the squeeze of everyday financial pressures combines with addiction to the point where some stupid (but understandable) decisions are made which create a different life trajectory, one that eventually takes a person to prison? These are bad but desperate decisions with tragically disproportionate and inhumane consequences. Everyone deserves a second chance from a bad decision made under unimaginable life pressures.

The incoming Labor government has flagged some future flexibility in applying section 501, particularly regarding length of time spent in Australia and with special consideration being afforded to New Zealanders, as befitting the historical immigration ties between two parts of what was once the one colony. We await the tabling of the Migration Amendment Bill 2022 later this winter, all going well.

Whether for jobs in sheep shearing, like my own tupuna, the mining boom or beyond, Māori have continued to come to Australia, a country with close to zero sympathy for the historical wrongs inflicted on Māoridom by the British and their colonial descendants. Mainstream white Australia has had a hard enough time getting to grips with the attempted genocide that its ancestors dished out to our own First Nations people to worry about what happened in colonial New Zealand. Even for progressive Aussies, a Jane Campion-style shot of a black sandy beach and Harvey Keitel in brown face is about as close as most get to properly comprehending the reasons why there are so many Māori in Australia.

It’s because many have no choice.

Help us help Aussies understand this. Help us to help them shape laws based on aroha, not needless cruelty and punishment for punishment’s sake.

*Mat Henderson is the principal lawyer of Reparation Legal and is based in Sydney. He is a member of Filipa Payne’s Route 501 Advocacy legal team advised by Professor Patrick Keyzer in Melbourne and by Professor Kris Gledhill and barrister Sam Moore in Auckland.