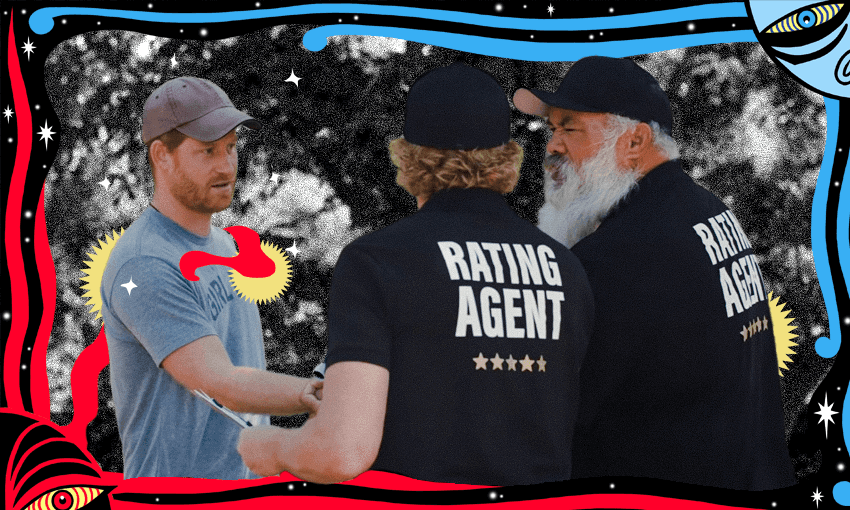 Anything that upholds mātauranga Māori as a solution to the many woes of the climate crisis is a positive, writes Te Kuru o te Marama Dewes. But the least the Duke of Sussex could’ve done was share his platform of influence with Māori.

I think it’s fair to say that many Māori in my generation are ready to divorce the royal family, and would happily see the Queen removed as head of state. But concerns remain around how our founding documents, He Whakaputanga and Te Tiriti o Waitangi, which hold the government accountable to Māori, would continue to be honoured by successive governments if the British Crown was no longer in the background.

However impermeable Te Tiriti o Waitangi and Māori rights may be, they are consistently undermined, as evidenced by the rapid changes to the RMA (Resource Management Act) by the Labour-led government, leaving many iwi in legal battles with developers who haven’t consulted or considered impact upon mana whenua. At this very moment, Ngāruahine in Taranaki are in court, fighting to appeal the resource consent for the construction of wind turbines by Hiringa Energy that will disrupt their relationship with their tipuna maunga, Taranaki.

These concerns are only amplified by ongoing rhetoric that spreads fear and misinformation around restorative and transformational justice for Māori, and challenges to initiatives such as the Māori Health Authority, the three waters reform and of course, the aspirational report that sent the most fragile politicians and political commentators into a frenzy, He Puapua.

National Party MP Shane Reti even went as far as undermining the United Nations Declaration on the Rights of Indigenous Peoples in a recent interview with Mihingarangi Forbes on The Hui, with unnecessary and utterly disrespectful timing given the recent passing of one the report’s key authors, Moana Jackson.

“What we [National] signed up to was a non-binding declaration… Do we actually need a declaration? Is the Treaty of Waitangi actually not enough?” Reti asked Forbes.

Far from his own area of expertise, it reiterated a playbook being employed by politicians within Act and National who seem to be reading straight from Trump’s “dirty politics for dummies” in a desperate attempt to gain votes.

The right are seemingly caught up in the politics of racism, with politicians of Māori descent such as Reti and David Seymour perhaps dealing with their own internalised racism.

The current political landscape is mentioned here because anything that platforms Māori culture and knowledge as legitimate, as Prince Harry, the Duke of Sussex, has done, often incurs racist backlash. Flashback to the highly publicised denial of mātauranga Māori as science by non-Māori staff at Auckland University.

Interestingly, the usual naysayers have been quiet about the statements that Prince Harry has made.

Prince Harry, who is still a “prince” even though he prefers not to use his royal title, made a random appearance on our timelines last week. He was promoting his new international eco-travel non-for-profit, Travalyst.

He released an exclusive video statement to Te Ao With Moana, Māori Television’s award-winning news and current affairs programme hosted by award-winning presenter Moana Maniapoto. I mention these accolades because it seems like a reasonable justification for the move by Prince Harry and his team.

New Zealand could be viewed by some as an outpost of the British empire, which is only now asking itself serious questions about its national identity. The royal family’s popularity with the countries it’s colonised appears to be diminishing, along with the adoration of Captain Cook, as people become more enlightened about history and motivations behind the Doctrine of Discovery. The latest appearance by Prince Harry could be interpreted as a subtle way of reaffirming his own presence in Aotearoa.

Prince Harry has quite publicly distanced himself from his own peeps, ie the British royal family, in a viral interview with Oprah Winfrey that exposed racist comments made by members of his own family towards his child with his African American wife Meghan Markle. As unsurprising as it was, it gave rise to international condemnation of the British royal family and what they represent.

Perhaps the video of Prince Harry is a simple, genuine gesture from an honest guy with good intentions. He does come across as a good bloke. Although, we have to keep in mind that his family represents an inordinate chunk of wealth and is responsible for alienation and subjugation of indigenous people around the globe, and that their continued relevance is based on public adoration and subordination.

To get public buy-in to maintain his personal brand, Prince Harry positions himself as one of the people. In a promotional advertisement featuring some of NZ’s most beloved actors, such as Rena Owen, Rhys Darby and Dave Fane, he’s dressed in a plain T-shirt and a baseball cap.

In the ad, Prince Harry states that, “Guided by Māori knowledge and practices, Aotearoa is a country of sustainability pioneers, and I’m particularly impressed by the recent efforts of the Tiaki promise. The Māori culture inherently understands sustainable practices and how to take better care of our life-giving land, which are critical lessons we can all learn.”

The “Tiaki promise” he refers to is an initiative by a number of big tourism and environmental players in Aotearoa including Air New Zealand, the Department of Conservation, Local Government New Zealand, New Zealand Māori Tourism and Tourism New Zealand.

“Travalyst is striving to make that a reality for everybody who wants to support local communities, travelling with kaitiaki values and looking after nature and wildlife,” Prince Harry continues.

Hearing a member of British royalty talk earnestly about kaitiaki values is interesting. On one hand, it feels like progress. I’m cringing at his pronunciation, while at the same time nodding at the gesture. On the other hand, I’m left wondering why he didn’t use his wealth and influence to better enable Māori to embody those values that he’s borrowing for his campaign.

Eco-travel is a wholesome market, encouraging travellers to engage with environmentally friendly tourism options and practices. Formerly our biggest export industry, our tourism industry has taken major hits in the last two years. Māori as traditional guardians of our whenua and moana, as well as key stakeholders in the tourism industry, have a vested interest in anything that helps regenerate that market in an environmentally sustainable way. During a climate crisis, eco-tourism seems like a natural step for us all, so the campaign comes at a good time.

In saying that, Prince Harry could do more. What we saw was a Pākehā male with the highest privilege delivering a message that praised Māori sustainability as a way to validate his message about eco-travel. What we didn’t see was Māori talk about our own cultural values. He didn’t share his platform of influence with Māori, in what could have been a remarkable show of partnership. Neo-colonialism aside, it’s useful to have someone with the perceived status that Prince Harry has, and the reach he still commands, promoting Māori cultural knowledge. Long may his words echo throughout the boardrooms and living rooms in this country.

Anything that upholds mātauranga Māori as a solution to the many woes of the climate crisis is a positive. And perhaps if New Zealanders won’t listen to Māori when we say we have a worldview and the solutions with it to improve how we operate more sustainably in this country, maybe they’ll listen to Prince Harry.

After all, he said it, not me.