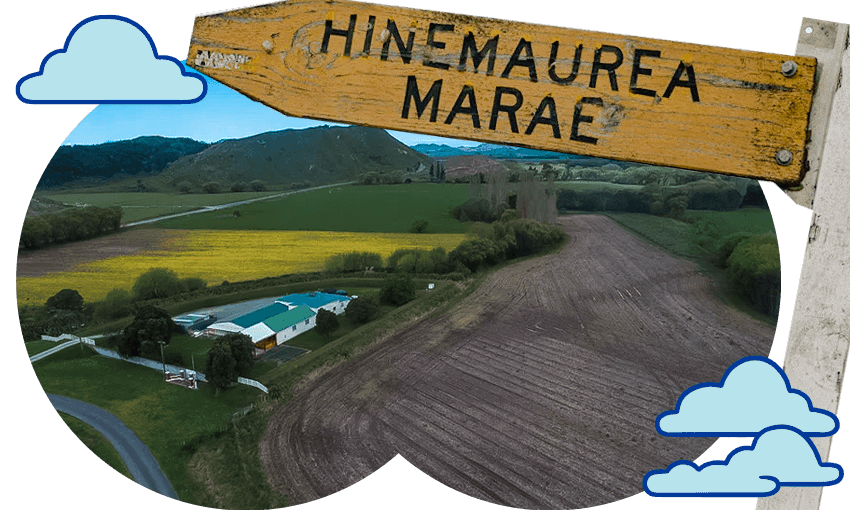 Hinemaurea ki Mangatuna marae on the East Coast is the soul of the community (Photos: Josie McClutchie, additional design by Tina Tiller)

‘100 years? Mate, it’s every year we’re getting these’: On the East Coast flood frontlines

Hinemaurea ki Mangatuna marae on the East Coast is the soul of the community (Photos: Josie McClutchie, additional design by Tina Tiller)

With the Tairawhiti region under a state of emergency, and some residents advised to move to higher ground, Don Rowe spoke to a marae leader about how their flood defences are holding up,

On Tuesday night, yet another “100 year storm” struck Tairawhiti causing flooding, power cuts, emergency rescues and forced evacuations. It was a weather event described by Gisborne Civil Defence manager Ben Green as “almost biblical”. On Wednesday afternoon, after a state of emergency was declared in the area, Metservice was warning of more heavy rain to come.

Zak Horomia, chair of Hinemaurea marae in low-lying Mangatuna, said he was unable to sleep as the storm broke, fearful of the flooding that has ravaged Hinemaurea in the past.

“I worry every time there is a storm. And it was just torrential rain and thunder and lightning. A lot of people were evacuated during the night and in the early hours of the morning.”

The marae’s floodgates prevented the worst of the damage, and Horomia pumped the remaining surface water off the grounds on Wednesday morning, but he said the situation remained uncertain.

“The surface flooding covered the road, I had to go get my loader from the quarry to get to the marae. Civil Defence asked me to talk to some of the whānau in the area and get them out of their houses because they wouldn’t move. They said they were safe, I told them ‘you’re not safe, get out, there’s more rain coming.’”

Elsewhere, said Horomia, inflatable surf lifesaving boats had been used to rescue people stranded in their vehicles on the flooded roads and highways.

“They sent the IRBs down the main road to save some fullas in their trucks. They got them back to safety. A chopper went and got another lot off the highway. There were also some workers with diggers who were stuck but managed to be rescued.”

On Wednesday afternoon Horomia was headed south with his loader to help repair the bridge at Tokomaru Bay which links the township to State Highway 35. The bridge, which runs over the Mangahauini River, was washed out earlier in the day by floodwaters, leaving a several-metre gap impassable by vehicles and isolating the town, which had more than 600 homes without power.

Horomia said whānau in the area believed the increasing frequency of extreme weather conditions was linked to climate change.

In 2020, insurance claims for weather-related incidents reached almost $250m. But the rain and flooding also have implications for culturally significant sites. Huge numbers of marae across New Zealand are located within a kilometre of an awa or moana, and around 70% are less than 20 metres above sea level. In Te Puia, the Gisborne District Council said almost 240mm of rainfall between 6pm and 12am. Similar rainfall was reported at the headwaters of the Waiapu River which runs through Ruatoria, and the Hikuwai River reached almost 13 metres. According to Niwa, the area has received three times the amount of rain expected in March in just 24 hours.

Flooding on the east coast often brings slash events, where the consequences of intense forestry are carried down from the maunga, clogging streams and blocking access to mahinga kai. Many Māori in Tairawhiti also live rurally, and closed roads and downed power lines exacerbate their isolation.

On Wednesday, diluted sewage was released into the Tūranganui River after Gisborne District Council opened the emergency sewage valve to release pressure in the Kaiti catchment in Gisborne proper. Tangata whenua have criticised GDC in the past for discharging sewage into the awa, which flows into Tūrangi-a-Kiwa/Poverty Bay and desecrates the moana.

The urupā at Hinetamatea Marae in Anaura Bay also suffered damage in the flooding. Marae secretary Elaine Tamatea told Stuff there were around 50 marked graves in the urupā, and likely more that were unmarked. Tamatea said whānau in the area were used to extreme weather events, but there had been an obvious increase in their frequency.

Last year, Ngā Pae o te Māramatanga and Manaaki Whenua released a report that captured the unique exposure Māori face to climate change. One of the report’s authors, Dr Rhys Jones (Ngāti Kahunungu), senior lecturer at the University of Auckland’s faculty of medical and health sciences, told The Spinoff that climate change-related damage to low-lying cultural sites was likely to have a significant effect on Māori mental health.

“This is not a new experience for us, obviously; through the process of colonisation there has been massive dispossession of land and other resources. That is threatened even more by the impacts of climate change such as sea level rise and coastal erosion, but also a greater likelihood of extreme weather events and things like flooding.

“We are likely to see that having major impacts on places like marae and urupā, adding another layer to the cultural burden of climate change.”

State Highway 35 was closed again on Wednesday night in expectation of further heavy rain. That too will eventually pass, but the people of Tairawhiti increasingly wait for the next “100 year storm” they will have to endure.