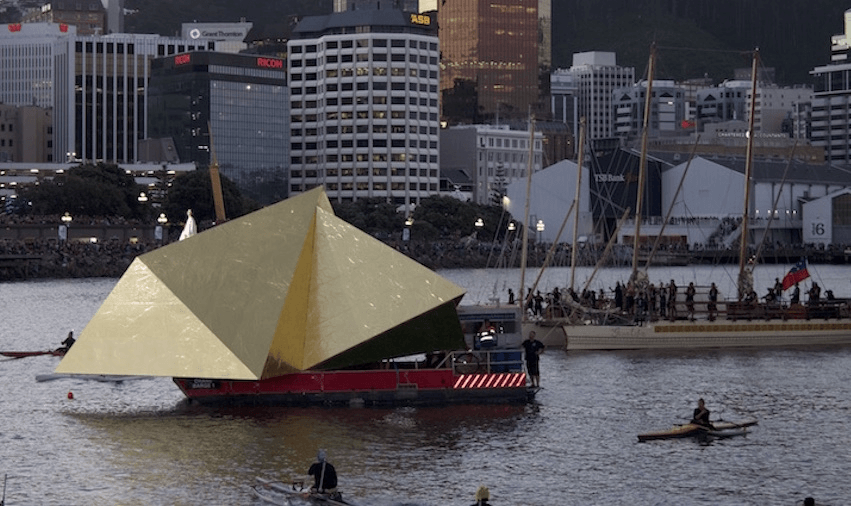 The Guiding Star arrives in Wellington harbour as part of Kupe, the opening of the New Zealand Festival 2018.

The Guiding Star arrives in Wellington harbour as part of Kupe, the opening of the New Zealand Festival 2018.

This weekend saw thousands converge on Wellington’s watefront for Kupe, a tribute to Polynesian explorers Kupe and Kuramarotini’s discovery of Aotearoa and first landing of the waka Matahorua in the harbour. Meriana Johnsen reviews the show.

Weaving the past and the present, contemporary expression and ancient artforms, the welcoming of the waka hourua into Wellington harbour at dusk was an unrivalled indigenous spectacular. The double-hulled sailing canoes made their final stop after a months-long journey from Samoa, to the Cook Islands and around New Zealand. The first part of A Waka Odyssey – the vision of director Anna Marbrook, waka expert Hoturoa Barclay-Kerr and production/custome designer Kasia Pol – was the result of years of preparation. The result was a stunning theatrical event which showcased Pacific art forms and the power of our ancestors who used the stars to guide them from Hawaiki on the very waka hourua on show.

Actor Te Kohe Tuhaka was a force as Kupe in a magnificent gold and blue costume standing upon three shipping containers. He opened the show with a kōrero about the story of Kupe, the navigator who “travelled past the horizon” to first land on New Zealand shores over 3000 years ago. Around the other side of the waterfront, singer Maisey Rika, playin Kupe’s wife Kuramarotini, also stood atop a 10m platform adorned in a red and gold gown. She was flanked by two wāhine performing a combination of Pacific dance forms, as a red ribbon draped dramatically off into the water.

The musical score by Trinity Roots’ Warren Maxwell perfectly complimented the action on the water (if you were lucky to get a glimpse). The cohesive sounds threaded the different elements of the performance together: a cacophony of tui with a slow drum, giving way to Tuhaka’s kōrero, underwritten only by the plucking of an acoustic guitar. A few heavy drum beats signalled the start of a beautiful waiata before a lengthy and dramatic drum roll became the backdrop for the waka uma to do a lap of the harbour. The chilling karanga that followed gave way to deep bellowing horns as the first of the waka hourua emerged, and the music score opened up to the mass choir as the waka hourua did their rounds of the harbour’s edge.

The pinnacle was the arrival of The Guiding Star, a woman in white sitting upon a pyramid-like structure on a barge surrounded by the waka hourua. In the glow of the Wellington dusk, her words were a reminder to so many of us lost in a colonised country and a globalised world: “When you look up you know where you are. When you know where you are, you know who you are.” But this was a celebration for all of us who call Aotearoa home, whether Pacific, Māori, Pākehā, Asian or other. “We are all voyagers on this blue canoe” – the words of the star echoed around the harbour.

“He waka eke noa – we are all on board the same waka,” was the spirit of the event. The big finale, a 1000-strong haka, was so powerful you could have heard a pin drop at the end. The energy reverberated through the sea of people, sat in the air pulsating, and for that moment the pushing and protestations of “I can’t see anything” were silenced.

At one point, a man came striding through the crowd, calling out a karakia. “Tihei mauri ora”, he called out with such mana that some people turned around thinking it was a part of the performance. As I weaved through the hoards of people, I was heartened to hear snippets of te reo. It was an evening for te ao Māori to come out from behind closed doors and be celebrated in public. Standing with our Pacific brothers and sisters, it was a time to honour where we have come from. Only by knowing where we have been, can we know where we are going. A performance like Kupe is much more than just a celebration of Pacific culture, it is an opportunity to know ourselves better as a nation by understanding how we came to be.

You can watch the performance in full on the NZ Festival Facebook page.