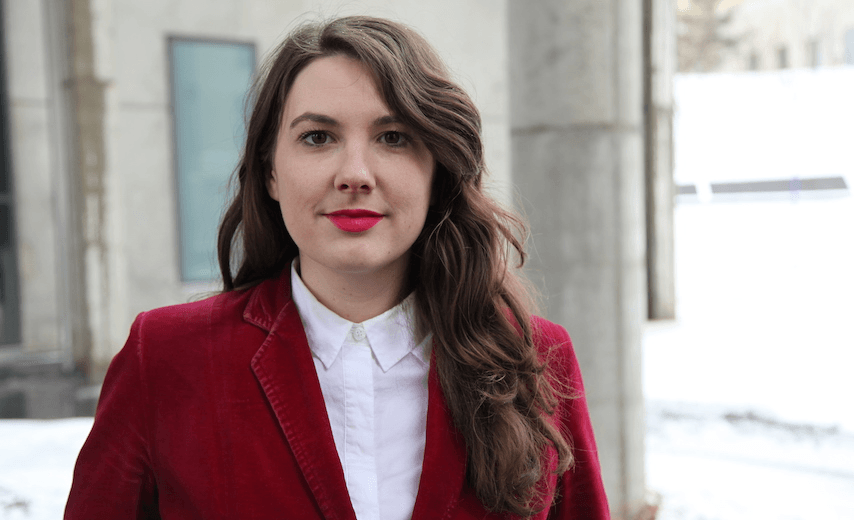 Playwright Eleanor Bishop: “To be a young woman is to be harassed”

An interview with the super-sharp, furious, funny and startlingly creative Eleanor Bishop, whose acclaimed play about campus rape, Jane Doe, is on for two weeks in Auckland.

When she was aged 20, Eleanor Bishop says she was struck by three things. One, she was surrounded by sexual harassment. Two, there was, thank god, feminism. And three, she had not being taught anything about female sexuality.

She’s 32 now, and one of the most exciting and provocative theatre-makers we have. Her show Boys deconstructed Greg McGee’s modern New Zealand classic Foreskins’ Lament to the astonishment and acclaim of audiences at the Auckland Theatre Company’s Waterfront Theatre earlier this year. (You can read about that show in Alex Casey’s interview with her here and a discussion on the show here.)

Now Jane Doe, Bishop’s inventive and immensely confronting play about rape on American college campuses, first seen in Auckland in the Fringe Festival, opens this week in a return season.

“She found that girls lean in,” says Bishop. “They want to be the boss, they want to earn as much, they have ambitions, all those things – but they still expect that until they’re at least 25 sex will be shit. To be a young woman is to be harassed. For many adolescent and young adult women, harassment is a defining characteristic of sex.”

She recommends Orenstein’s TED Talk on the subject and she’s right: it’s unsettling and empowering, in all the right places, and definitely worth watching. Like Orenstein, Bishop has been researching and writing about sexual relations for years. She divides her time between New Zealand and the States, where she studied at Carnegie Mellon University on a clutch of fellowships, and where she created Jane Doe. She’s a bit smart, Eleanor Bishop.

The script of Jane Doe is based on trial transcripts and interviews she did on several campuses. It had a very good run here in the 2017 Fringe Festival and is back this week for a short season, to raise money for an invitation appearance at the Edinburgh Fringe Festival in August.

Last month The Spinoff down with Eleanor Bishop for coffee and a few questions.

Why is sex for young women characterised by harassment?

So what are we doing wrong?

Jane Doe was researched and written in the States. Does it apply directly here?

There’s a fight over sexual relations everywhere. In the States they have a bigger focus on abortion, whereas here it’s more about sexual violence. And the responses are different – we’ve found we have to tone it down here a bit here. During the play we invite the audience to text its responses and those texts appear onstage, on a big screen. American audiences get sad. In New Zealand they’re more stoic, they sit there. You know, that New Zealand thing.

Is this a forever subject or are you seeing change?

I think there’s been a change in understanding of what rape and sexual assault are. I started working on this show three or four years ago in response to a whole lot of assaults on women on campus. That suggests it’s a very long-standing issue, but in the last few years the definition of sexual assault and sexual harm has broadened. In Jane Doe, we look specifically at the question of a woman who’s passed out. It’s a shift for a lot of people.

You’ve been home for a while. Have things changed here?

I think they have. There are so many young people into art and politics. I love that. And it’s not just here, it’s happening everywhere. Social media, the internet, they’re a huge, huge part of it.

What about you? You’ve been doing prestigious study in New York and you live there half the time now. Have you changed?

Apparently I have a New York confidence. Karin [McCracken, who is performing in Jane Doe here] told me I was “so aggressive” when we met. Although when I go back to New York they tell me I’m losing that and I have to get it back.

What do you think?

Probably depends where I am.

Were you happy with the way Boys went?

Really happy. The work was what I’d hoped it would be and the response was much more positive than I expected. But having said that, I have internal measures of success. A good audience response is great, but it’s the icing on the cake.

What about Greg McGee, what does he think?

I don’t know. I wrote to him to ask his permission to revisit the play. I said, Foreskin’s Lament has canonical status, it’s like Shakespeare and Arthur Miller. With their plays, we revisit and reinterpret and reinvent, that’s how we honour them, by renewing them and plumbing their ongoing relevance. Foreskin’s Lament is a classic and I wanted to treat it like that, like a classic. He said yes. But he didn’t go to see the result.

What did the young men in the cast think?

One of the things I really liked was after the show they were all going, “Yeah, we’re feminists!” With a beer in one hand, you know, they went from supportive to loud and drunkenly proud.

There are laughs in your work, big generous humour, but still, it’s pretty tough work. How do you relax?

I watch cooking shows. I like Chopped and Cutthroat Kitchen.

Well, I guess. I didn’t think of that.

That comment you made before about female pleasure. Are you going to write about it?

Yes! That’s exactly what I’m working on now, a show about pleasure. I’m doing it with Julia Croft [who co-directed Boys] and it’s going to be called Body Double. It’s like we’re making music, this is our first album, we’ve got all this material. It’s so much fun.

Jane Doe is being presented in a kind of double bill, in two theatres, with Julia Croft’s Power Ballad, a hilarious, empowering fantasia on bodies, language, sexual politics and stuff you can do with a microphone. Power Ballad plays at the Basement Theatre and is also raising money to get to the Edinburgh Fringe Festival.