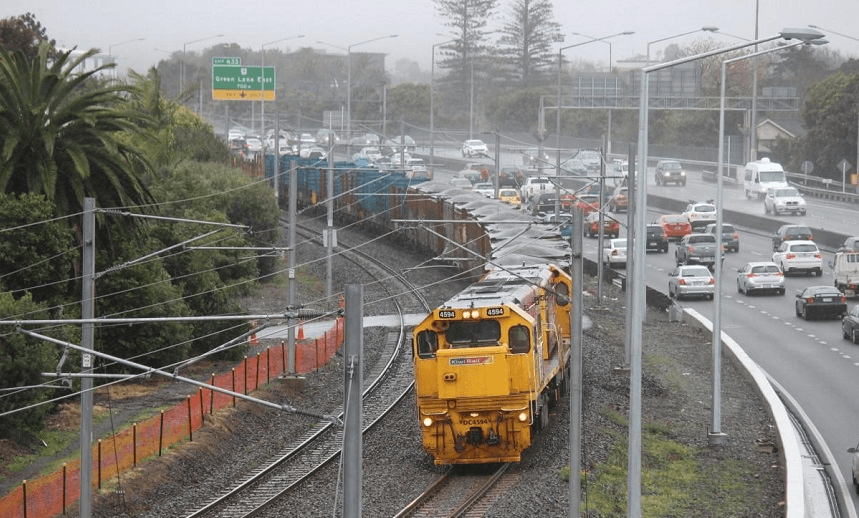 The business case for greater freight efficiency in South Auckland has finally been released, and it turns out that a new “Third Main” rail line is the best of 10 options. Guess what’s worst? Putting greater reliance on road freight. So why, asks Ben Ross, does the government still insist on favouring trucks instead of funding the rail option?

Back in June, KiwiRail refused to release the full business case for building the “Third Main” – a rail track from Otahuhu to Wiri beside the existing two tracks. Instead, it released a heavily redacted version. Now the unredacted version has been released – and its contents are a shocking indictment of government policy.

The purpose of the proposed Third Main is to allow freight trains to have a dedicated track separating them from passenger services on the most congested part of the Auckland rail corridor. For a cost of $65 million, KiwiRail would be able to run six extra freight trains a day and Auckland Transport would be able to move towards getting frequencies for passenger services up to every 10-15 minutes all day. The Third Main would, in theory, also enable better express passenger services between Pukekohe and Britomart once the City Rail Link becomes operable.

The heavily redacted business case was analysed by The Spinoff, The Nation, Greater Auckland and my own site Talking Southern Auckland. We speculated on what the redacted parts were and why they were redacted in the first place. One theory was that ‘Option Five’ (which was fully redacted) might have been the Metroport facility in Southdown moving, throwing freight movements up into the air. Metroport is owned by Port of Tauranga.

The unredacted business case was released on Tuesday in response to pressure from Harriet Gale of Greater Auckland. It reveals that Option Five was actually building a Third and Fourth Main (two new sets of tracks) at the same time. Here is the previously redacted Option Five:

The NZ Transport Agency (NZTA) uses a “Multi Criteria Analysis” (MCA) to assess funding projects. This was also previously redacted but is now visible. The report reveals that the Third Main had the second-best score in terms of benefits over costs. So what came out as the lead scorer? Here is the MCA:

Building a Third and Fourth Main together (P8 in the table), with a price tag of $200 million, came out first along all criteria lines. Building the Third Main on its own (P9), at a cost of $65 million, was second. Both were well ahead of any other options.

Shifting more freight by road (P3 in the table), which would require upgrading the Southern Motorway, came out worst.

NZTA’s modelling is not as effective in measuring wider benefits and costs as we would like it to be. Just look at the line “Cultural, Social and Environmental Effects”, where all the options are scored 0. That’s a neutral score and shows that cultural, social and environmental effects are not even assessed.

But we know that widening the Southern Motorway should have a negative score because it would result in houses being demolished, congestion getting worse and pollution also getting worse. We also know the two rail options, the Third and Fourth Mains, should have carried a positive score. Both would lead to more efficient freight train operations (economic), mitigated congestion on the motorways (economic and environmental) and more frequent passenger trains. That last one would have economic benefits, cultural benefits (via connectivity and accessibility) and environmental benefits (decongesting the motorway).

Without factoring in a proper analysis of cultural, social and environmental effects, the Fourth Main has a business case ratio (BCR) of +0.8 to +1.1. That’s the best of the 10 options, but it’s not great. But with those effects factored in, the BCR is likely to be +3.0 or more. That’s good.

Conversely, the BCR for relying more on roads (Option Three) is currently given as -1.5 to -2.2. With cultural, social and environmental effects included, those figures would be even worse.

1. Why was the business case redacted – especially for the Fourth Main?

The answer is surely politics. It seems to come down to an attempt to protect the position taken by the government.

The redacted material wasn’t commercially sensitive and nor would its publication have harmed the free and frank debate between officials and the minister. Instead, it contains a clear-cut case to build the Third and Fourth Mains as quickly as possible, and definitely before the CRL opens (2023 on current estimates).

The redacted MCA also completely demolishes the roads-first argument, with clear implications for the future of the proposed East-West Link (currently before a Board of Inquiry, with no business case and a BCR of 0.96).

2. Why does the government persist with the option of more roads for more road freight?

This question has been asked repeatedly by all the media organisations and many analysts following the issue, including politicians at central and local level representing nearly all non-government parties. The report discussed here was jointly prepared for the government by the NZ Transport Agency, KiwiRail and Auckland Transport. It recommends – that is, they all recommend – that the extra rail line or lines be built as quickly as possible.

The government’s continued support of the road freight industry in preference to expanding the role of rail, in the face of the data in this report, makes a complete mockery of its claim to prudent economic management. It makes, instead, a pretty good case for incompetence, or cronyism, or both.

Remember, it’s recently been announced we’re getting more passenger trains and more infrastructure to enable more housing in Southern Auckland. On top of the growing demand for freight trains, the case for building the Third and now Fourth Mains will soon be desperate.

By the way, the government’s infatuation with motorways and highways that look like motorways has produced a new set of drawings for that proposed East-West Link. NZTA wants it to look like this:

Instead of the best kind of rail, we’re currently on track to get this: the worst kind of road. And it’s going to cost around 10 times as much as the Third and Fourth Mains.