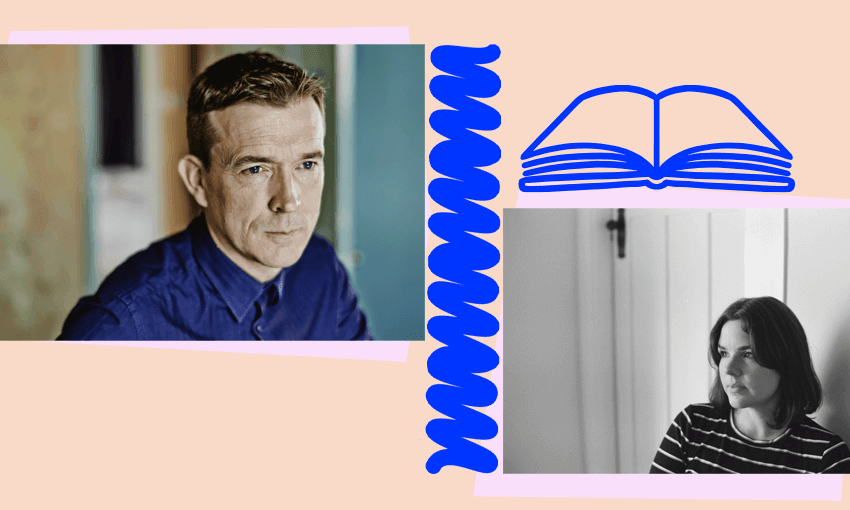 The superstar author of Cloud Atlas and The Bone Clocks is finally coming to Christchurch – kind of.

In a parallel universe where the Covid-19 virus did not rearrange the human world in 2020, my novel Utopia Avenue was published in the regular manner and I visited New Zealand and Australia to appear at literary festivals. I was especially looking forward to the Word Christchurch Festival. Its director, the writer Rachael King, had suggested a joint event with a musician to complement Utopia Avenue’s musical themes. To my surprise and delight, Hollie Fullbrook of the combo Tiny Ruins accepted our invitation to appear in an odd gig presenting her songs and my readings from my novel. I met Hollie and her music on my last visit to New Zealand in 2016 and divined something truly special in her ethereal, grounded, witty, yearning songs.

In this universe, alas, the virus did its grim worst. Flights were grounded, quarantine barriers went up and few of us went anywhere. Rachael and I agreed to see how next year looked when it arrived. When it did, we agreed that my coming to Christchurch in August wasn’t going to happen. But could I attend virtually? If so, how? We weren’t sure, but we both felt it would be worth Zooming with Hollie to see if any ideas emerged.

All I knew, going into that conversation, was what I didn’t want to do. During my virtual book tour for Utopia Avenue, I discovered – with countless other authors – that reading scenes from novels doesn’t really work the way it does when you’re reading live on stage. It’s as if the presence of the author is needed to compensate for the episodic nature of that exercise. Without that authorial presence, readings excised from a bigger narrative feel a bit flat, truncated and meh. What works better, I believe, are short, complete narratives with their own beginnings, middles and ends. These look and feel more like visual audiobooks – or even story time, when you’re a kid.

During Hollie’s and my long and winding Zoom, pieces of a new idea for a half-virtual, half-corporeal show emerged. First, I would send Hollie a few unpublished stories to see if they might give her ideas for some new songs. Second, I’d go metal-detecting in Tiny Ruins’ discography for ideas for possible stories. If stages one and two went well, we would film me reading my new “Tiny Ruinous Stories” as well as the stories Hollie had chosen to respond to musically. These videos of me reading would form the “words” half of a words and music event on stage where Hollie sings the songs live and in person, interspersed with me reading the stories not live and not in person, but kind of. Like a ghost.

I’d never tried anything like this before. I don’t really know how I write stories, but “They just sort of come” is the best description of the process I’ve ever been able to muster. Which is less of a description and more of an evasion. Certainly, I’ve never tried foraging for stories in other people’s songs – without their permission, it would feel like a bit of a liberty. How would I go about it? I began with One Million Flowers off Tiny Ruins’ Olympic Girls LP of 2019, just because it is impossibly beautiful and makes me glad to be alive so I can listen to it. I asked myself two questions: “If the narrator of this song was a fictional character, who would they be?” and “Under what circumstances might this character think the lines and experience the emotions present in this song?”

By answering those two questions, by using clues in the songs, my story One Million Flowers came pretty quickly. It felt natural to embed fragments of song lyrics into the story, so I did. Attentive listeners will be rewarded, Easter egg-like, by flashes of recognition when Hollie sings the song “alongside” my reading of the story. Since this method worked – I think – I repeated it for other Tiny Ruins songs that weave a particular bewitchment: Carriages, Priest With Balloons and Bird in the Thyme. The stories have to be concise – prose tends to take longer to read than songs take to sing – and as a writer, I go on a bit. (Try editing me: I’m a nightmare.)

So I arranged my four stories into a connected quartet. Like batteries in a row feeding voltage into the next battery along, my hope is that the four add up to more than the sum of the parts. The narrator of each story is the same woman – a pianist, as it happens – and the stories track her relationship with love, music and reality at four different stages in her life. My hope is that, when combined with Hollie’s songs, the “Tiny Ruins Quartet” (as I called the folder on my laptop) will be the strangest mini-musical ever witnessed on the venerable boards of The Piano in Christchurch.

How Hollie went about growing songs out of the compost of my stories is a question for Hollie to answer, as, when and if. At the time of writing this, however, she had shared the demo of a song responding to a story I wrote called ‘Lots of Bits of Star’ – and I love it. I’m excited by her choices of the stories I sent. She has chosen narratives that are close to my heart.

My stories are recorded against a suitably trippy backdrop (you’ll see what I mean) at the De Barra’s Folk Club in my hometown of Clonakilty, Ireland – where, with pleasing symmetry, Hollie has performed in previous years during the Clonakilty Guitar Festival.

Covid did us in again in 2021, but it’s finally happening in 2022. I wish I could be present in Christchurch on September 1 to see Hollie’s and my 12,000-mile collaboration in person. Then again, if I could be present in person, what Hollie and I have imagined into being – a 90 minute trip through a landscape of songs and stories that reflect, echo, amplify, harmonise with and above all, trust each other – would not have happened in the first place. Even a global pandemic can bring gifts, and the chance to work with and learn from Hollie is a gift I cherish. So. I’ll be present at The Piano in spirit, in story and onscreen, and I’ll hope to visit Christchurch the next time I publish. In this universe. Please.

David Mitchell appears in two events at Word Christchurch Festival (31 August – 4 September): he’s in conversation with Rachael King for The Faraway Near, followed by the collab with Tiny Ruins, If I Were a Story and You Were a Song, both on 1 September.