For decades, Scots have believed that Dame Lynley Dodd’s books are Scottish. She speaks with books editor Catherine Woulfe in an attempt to correct the record.

A wee while ago, my colleague Tara Ward was diligently researching her Hairy Maclary rankings when she noticed something odd. A scattering of Scottish people, it seems, believe our dear sweet Hairy is … theirs. 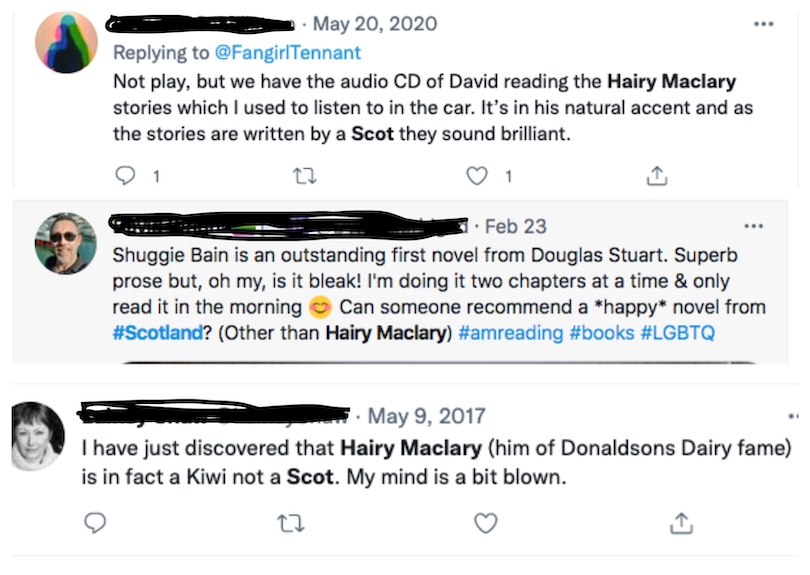 That last one may be innocent but in context of the others, it’s a concern (Image: Supplied)

The evidence is overwhelming. Google “Hairy Maclary Scot” and you get far too many results. The other morning I clicked on every single one. It took two hours. What I saw was disturbing, and revealed a misapprehension much more widely held and enduring than either Tara or I had believed possible. It’s not just Twitter, it’s Mumsnet. 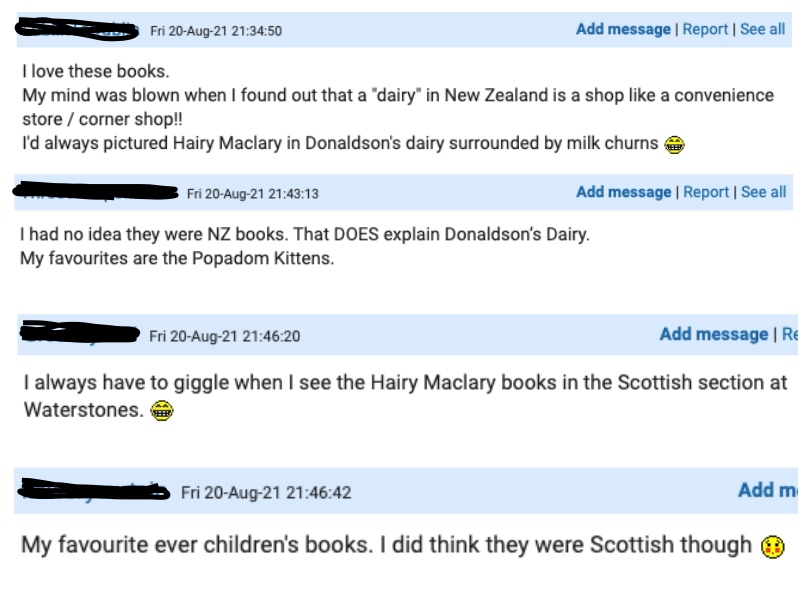 And it’s not even just social media: in 2016 the Guardian picked the OG, Hairy Maclary and Donaldson’s Dairy, as part of a Scottish “baby box”: They were corrected by a righteous correspondent shortly after. “I too used to believe that Hairy Maclary was Scottish, and as a former bookseller sold him with enthusiasm to Americans wanting something for the grandkids. But his creator hails from New Zealand … “

Much appreciated, Margaret of Fife.

Yet, much like a dog with Samuel Stone’s tastiest bone, misguided Scots continue to inculcate the next generation. They’re selling Hairy Maclary as a “Scottish book” in specialist Scottish bookstores. 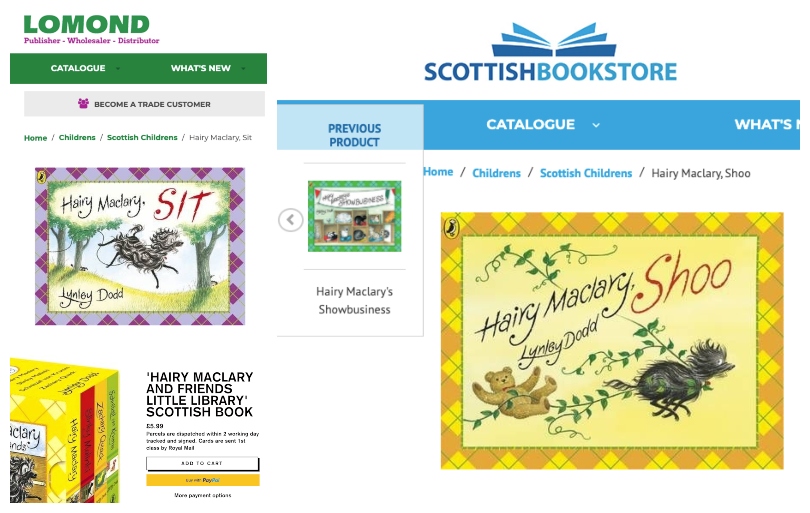 They’re roping poor Hairy into special Scottish theme days at schools and daycares, too. Proclaims a primary school on the outskirts of Edinburgh:

“On Friday the 22nd January, Primary 1 and 2 came together at a special assembly to celebrate Scottish culture. They recited Scottish poems and sang Scottish songs, and listened to the story of Hairy MacLary [sic] from Donaldson’s Dairy. Back in their classrooms, the pupils enjoyed eating oatcakes, cheese and shortbread whilst listening to Scottish music.” Like Hairy when he’s told repeatedly to stop, it just doesn’t stop. In fact it runs all the way to the top. I came across a curriculum resource for Scottish children on the website of Education Scotland, their equivalent of our Ministry of Education. Seventeen PowerPoint slides, getting increasingly specific about how teachers are to judge a child’s grasp of Hairy and his (our) gang. For example: “I will respond to the repeating words and phrases in Hairy Maclary from Donaldson’s Dairy, and choose other stories to listen to from the Hairy Maclary range, identifying the story from the cover/props/sounds. I will share my likes and dislikes for characters in the stories.”

There’s no explicit claim in that Powerpoint that Hairy is theirs – except, it’s not an isolated cameo. A teaching resource, again from Education Scotland: “Explain to the children that the special thing about the story you are going to read/listen to is that it is Scottish. Explore with the children Scottish stories they may already know. Have they read The Gruffalo, Katie Morag or the Hairy Maclary series?”

Be off with you, SHOO.

Perhaps most disturbing of all, the Scots are laying claim to Hairy on the telly, and with the audacity that comes from ownership, they are making pudding as tribute. 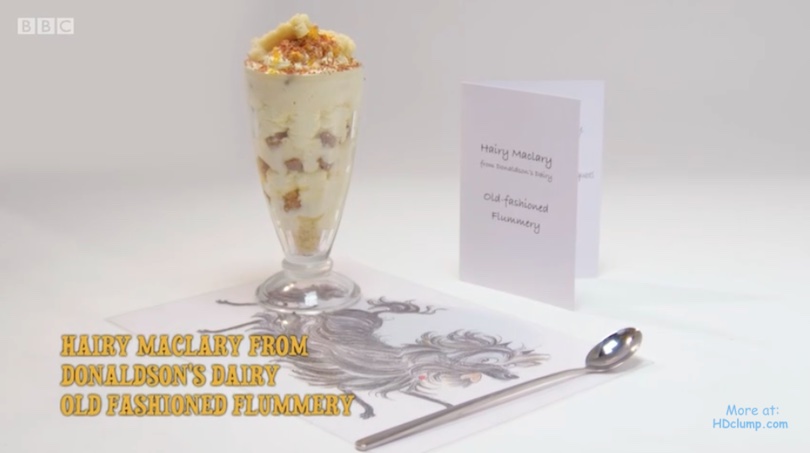 A dessert created by a Scottish chef as a nod to his Scottish nephew Jamie on the show Great British Menu: Scotland, last year (Image: Supplied)

It was time to get Dame Lynley Dodd on the phone. It’s been an upsetting morning, I warned her, before rattling through the shemozzle above. She’d heard about the pudding and thought it sounded rather nice (“layers of dog-bone flapjacks, whisky jelly and orange honey whipped cream”, said the synopsis). She had not heard about the bookstores and the schools, Education Scotland, or the Guardian.

She laughed a lot. “Oh, dear. Well, I do come from a long line of Scots I must admit, on both sides of the family, so maybe somehow that got out somewhere. Oh my goodness.”

We had a very lovely chat about all the markers of New Zealand her books are stuffed with. Actually we forgot lots of them at the time, but here’s a list: That tree that Scarface Claw gets bailed up in? Pōhutukawa. There are loads of ponga trees, and flax, and ferns. The mail in Hairy Maclary, Shoo is addressed to Tui Street. In Showbusiness there’s a road chocka with tī kōuka, called Cabbage Tree Row. The whole of Hat Tricks, where Hairy catches a flyaway hat, is set in gardens that look to me an awful lot like Wellington Botanic Garden, and Dodd enthusiastically agreed “probably is!” It was definitely a Wellington wind, she says. (She was living in Belmont, Lower Hutt, when she wrote the first book, and now lives in Tauranga.) The houses throughout are weatherboard, with corrugated iron roofs, most likely uninsulated and full of mould. There are letterboxes, which apparently Scotland is short on. There are dairies, called dairies, which I’m told is also not a Scotland thing. 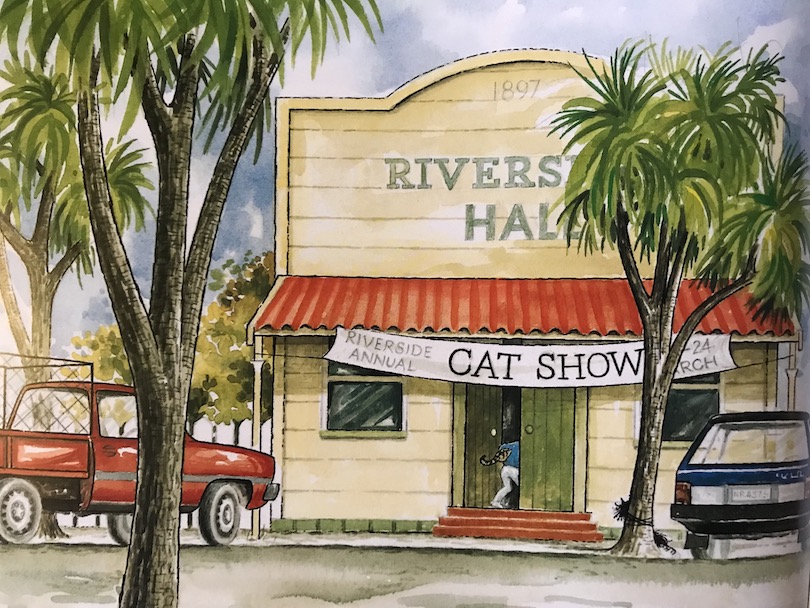 How could a person look at these books and think: Scotland?

Well, to be fair, Hairy’s clearly got a bit of Scottish terrier in him. Then there are the names: Maclary, Muffin McClay, Grizzly MacDuff. OK, Dodd said, but then there’s Schnitzel von Krumm, he of the very low tum. And “None of the Irish names have been claimed by Ireland, I don’t think. [Bitzer Maloney, Dooley’s Daily Delivery Van] Well, maybe they have and I just haven’t heard about it, but certainly the Scots have been claiming Hairy ever since it first came out.”

Compounding things, she pointed out, is that in 2012 a Scottish theatre company toured a Hairy Maclary show, performing internationally as well as part of the Edinburgh Fringe Festival. Plus the audiobooks have been voiced by men with Scottish accents: Kyle Pryor, David Tennant. If you’re a kid in Scotland, what do you assume those ponga trunks are? Massive spider legs? (Image: Hairy Maclary’s Hat Tricks)

Although she’s not in the least grumpy about the whole business – and actually, given her Scots ancestry, “quite happy to be claimed” – Dodd has been valiantly trying to put things straight. “Oh I always stick up for New Zealand, yes, and say ‘Well as a matter of fact, no, it’s a New Zealand book.’ I’ve already said that. But probably not in the right places, not online where everybody reads it.”

So for the record: “I’m sorry, the book is a New Zealand book. Hairy Maclary has got a Scottish ancestry, in fact he’s got bits of Scottish terrier really, hasn’t he, in him. And so, you know, he’s a New Zealander with Scots background, like me.” She laughs again.

But this is a mistake that has been calcifying for the best part of 40 years. The Scots have thought Hairy’s theirs for as long as we in Aotearoa have known he’s most indubitably ours. It’s a fallacy as entrenched as Hairy’s inclination toward hustling and also bustling.

“Perhaps I should go over there and do a tour saying we need to put this right … Maybe I should write a letter to the papers or something over there and say I am speaking on behalf of New Zealand. Oh dear.”