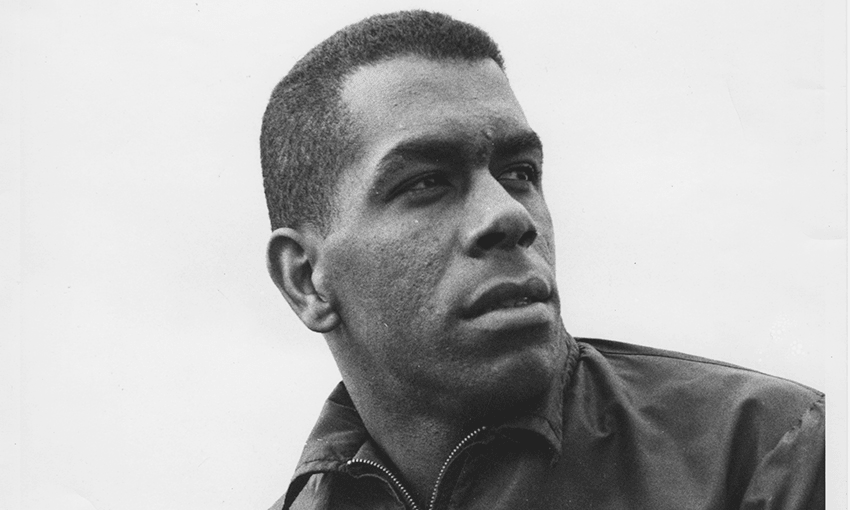 Tom Augustine on the mythic satire of William Melvin Kelley’s A Different Drummer, written nearly 60 years ago and still too relevant.

The haunting and oblique A Different Drummer, a classic of the civil rights era by unsung satirical mastermind William Melvin Kelley, takes its prophetic title from, and begins with, a quote from Henry David Thoreau: “If a man does not keep pace with his companions, perhaps it is because he hears a different drummer. Let him step to the music which he hears, however measured or far away.”

Thoreau, the greatest of philosophers dedicated to natural and transcendental living, provides a spiritual lens with which to encounter this brilliant, mysterious and astonishingly unappreciated monument of Black writing in the 20th century.

William Melvin Kelley’s work experienced some minor success in the heyday of the ’60s civil rights movement, of which this work landed smack-bang in the middle. And yet, perhaps due to the consistent difficulty of writers of colour to establish themselves among their more well-represented white ilk, his legacy has largely remained muted.

Kelley died two years ago. He left behind four novels and several short story collections, including a couple unpublished. All of them represent a man whose perspective on race relations and Black emancipation was vitally, electrifyingly ahead of its time. This could be why his work resonates now more than ever, prompting a re-release of A Different Drummer, which arrives into a world of resurgent white supremacy and Trumpism like the blaring of apocalyptic trumpets.

A Different Drummer is Kelley’s debut, and what a debut it is. It’s astonishing to consider a work like this and note the way the author faded into relative obscurity soon after. The phrase ‘forgotten classic’ is often bandied about, but this book specifically feels like a potential staple of understanding the Black American struggle – the kind of thing that could be taught to perceptive high schoolers. Kelly was long an unseen but prescient cultural critic: as noted by the New Yorker, Kelley was one of the first to identify the appropriation of Black slang in modern ‘cool’ culture, and is credited with being the first to put to paper the term ‘woke’, meaning awake to harsh social realities. He was also one of the few to consider white identity from the perspective of one oppressed by whiteness. It is not a flattering perspective.

A Different Drummer tells the story of a small Southern town in 1960s America, where one day a Black man named Tucker Caliban burns down his house, salts his land, slaughters his livestock, and leaves without another word. This prompts the mass exodus of every Black person in the town, which is run through with racists and structural racism both implicit and explicit.

This exodus is both the beginning and endpoint of the novel. What happens after is permanently, hauntingly elliptical – a town filled only with white people, alone with their regrets and their short-sightedness. Told entirely from the point of view of the white residents and mostly via flashbacks from the people who knew Tucker Caliban – or thought they did – the novel considers, in unflinching detail, the desire of white people to understand the motivations and driving forces of Black people, and thus control them.

A Different Drummer attacks the notion of white control from multiple angles, never forgetting the lingering spectre of racism – most significantly, through the local legend of an impossibly large and powerful African slave who briefly led a rebellion in the town. Caliban is believed to be a descendant of this man, and a group of the white men who observe the exodus from a local supermarket porch frequently discuss how this shared blood has possessed Caliban with the radical force of a revolutionary leader.

Kelley’s prose remains largely vague about Caliban’s understanding of control – though enough is implied by the little that Caliban says that his beliefs aren’t too difficult to parse – leaving readers to piece together what they can about his motivations, and how he mobilised an entire town’s Black population.

There are no concrete answers. The inability of white people to truly grasp the experience of the people descended from slavery and still feeling the grip of it is the driving force of A Different Drummer. Kelley offers clues, sometimes clear and sometimes frustratingly murky, but maintains that there are some things that white audiences, both reading and observing from within the world of the story, are simply unable to understand.

Kelley’s book is satire – an almost unrelentingly dark one – and his focus on the more well-meaning, liberal denizens of the town is striking. The bulk of the story is devoted to the experiences of the Willsons, a wealthy, lightly progressive family whose fortune is built on a slave empire and to whom Tucker is inescapably tied. Each of the perspectives provided – first the son, then daughter, mother, and father – reveals a little more of Tucker’s backstory, but never seems to bring the man closer. The grief the Willsons feel is personal. But their well-meaning gestures are couched in an unwillingness to really contend with the white supremacy propping up their lives and infusing the very veins of the town.

A Different Drummer is a profoundly American story. It deserves to be considered one of that country’s great commentaries on the race struggles of the 20th century that echo so loudly still.

Racism is a profoundly different thing from country to country, and undoubtedly comes in many forms – an American person of colour’s experience with it will differ from a New Zealander’s. And yet, the constant of white blindness, white ignorance, and a refusal to engage or listen – coupled with an almost subconscious desire to dominate – undoubtedly resonates here. A Different Drummer ends in a horrific moment of violence, one fated from the opening moments of the story – one, Kelley seems to argue, destined in the story and sins of America’s ruling classes.

Most of us fear what we don’t understand. When presented with a moment outside of their white social understanding, the people left behind in A Different Drummer predictably turn to the blunt cruelty of their dominance, at the behest of their souls. The larger question is – what fate awaits the soul of the country around them?

A Different Drummer, by William Melvin Kelley (Quercus, $28) is available at Unity Books.