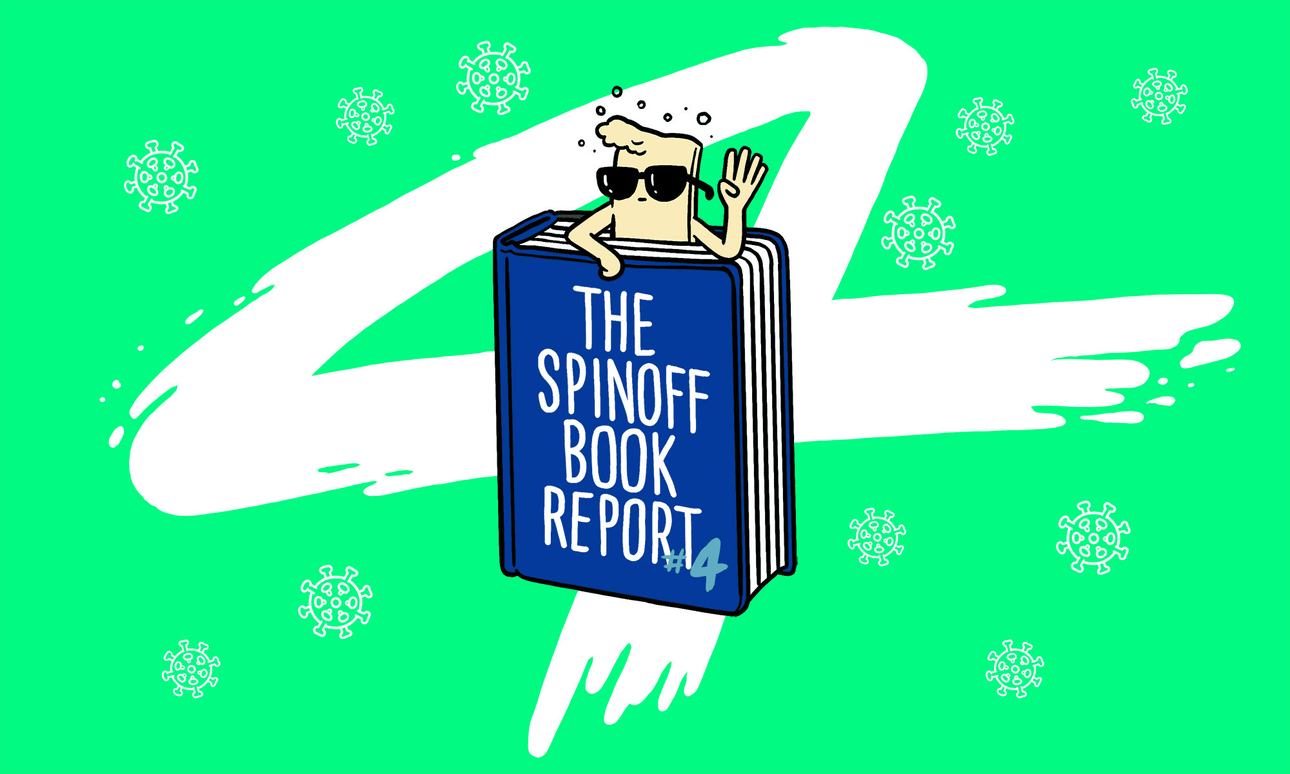 Welcome back to The Spinoff Book Report, an irregular series in which I rave about a bunch of new-ish books that I love with no reservations.

Today’s instalment is a dose of what’s good for you. I had Covid a couple of months ago and it smashed me. I still find it hard to concentrate properly, so what follows is a list of only the grabbiest, most compulsive reading. These books are swift and they blaze with story; they’ll haul you through even the most knackering post-Covid day.

Racy historical fiction (very) loosely based on the mystery of the princes in the Tower. I whooped when it arrived, turned the telly on for the kids and made myself scarce for an hour.

Olivia Hayfield is the alter ego of Sue Copsey, a Brit who moved to Tāmaki Makaurau so long ago (1996) we can probably stop saying she’s a Brit. For the last few years, around her day job of editing, she’s been turning out straight-up great novels that reimagine Henry VIII and his daughters as modern media tycoons (Wife After Wife in 2020; Sister to Sister in 2021). This is a slight deviation, with a story hinging on Richard III, whose skeleton was sensationally discovered under a Leicester carpark in 2012.

Copsey never misses a chance to inject glamour or celebrity, or a gorgeous gown, but there’s also a real heart to her books – here, the protagonist is mourning her little brothers, who are missing and presumed dead. She’s also deeply in love with a man (Richard, hot and brooding) suspected of their murder. Ridiculous, but somehow, she sticks the landing. (Hachette)

Skandar and the Unicorn Thief by A.F. Steadman

Simon & Schuster paid seven figures for the first three books in this series, which is apparently the highest advance ever for a debut children’s writer. And they really plan to sell the bejesus out of this first book. “[OUR] BIGGEST EVER MARKETING AND PUBLICITY CAMPAIGN”, my review copy shrieks. There are “consumer stunts” in the works (one shudders to think), “epic in-store point of sale and retail theatre showcasing Skandar’s world”, “continuous digital content across TikTok, YouTube, Instagram, Facebook and Twitter.” There’s a film coming too – Sony’s bought the rights, in another crispy seven-figure deal. Brace yourself.

But also … this is, cross my heart, an extremely good book. Aimed at ages 8 to 12 (but don’t let that stop you, I was utterly engrossed) it’s the first in a series about a world where unicorns are not only real, they’re really deadly – unless they bond with a human at the moment of their hatching. Among humans, bonding and becoming a unicorn rider is considered a tremendous honour. It’s also clearly just a really fun way to live your life.

Our hero Skandar is a kind kid who, despite the mysterious forces out to stop him, winds up with a unicorn. Now he’s off to unicorn school and that sounds so dumb, but it’s really done well, with a rich cast of characters as sidekicks, a bunch of thrilling races and battles, bloodthirsty wild unicorns frothing at every turn, and a backstory for Skandar that rings true and resonates. Also the unicorns are awesome. (Simon & Schuster)

To the Sea by Nikki Crutchley

A terrific thriller from the Cambridge writer whose previous three novels, a trio of police procedurals, all did very well in the Ngaio Marsh Awards. (To the Sea came out in December, but I only got to it recently.)

One day a father tells his family they’re moving. They pack up and leave the suburbs for a dark pine forest beside the sea. There’s a big cliff. Sharp rocks. Paradise, he tells them, and he calls it Iluka. They all get new names, too.

Our narrator is a young girl growing up in this weird, insular place. As she gets older, the glimpses she gets of the outside world play on her mind. And then one day a journalist is allowed to come stay, and the pieces start to slot together …

You know that feeling when you walk into a pine forest? The hush, and spooky coolness, and the way after a hundred metres or so you can’t tell which way you walked in – that’s the reading experience here, and I savoured it. (HarperCollins AU, $35)

House of Sky and Breath (A Crescent City novel) by Sarah J. Maas

When I was properly sick with Covid I read nothing but Sarah J. Maas, putting away brick after brick of her great rich sexy fantasies. I stacked up a tower as high as my knee. It was very comforting.

This is her most recent novel and the second in the Crescent City series, which follows the stroppy constantly side-eyeing half-Fae Bryce Quinlan through revolutions and romance. Much darker than her Court of Thorns and Roses series. There’s a fallen angel. I’m heavily into it. (Bloomsbury)

Family of Liars by E. Lockhart

Technically a prequel to We Were Liars, the smash hit YA novel Lockhart released in 2014, but I strongly recommend reading it after We Were Liars, because it is jammed with spoilers. (It’s also a really grown-up YA, by the way.)

It’s impossible to set out the plot without ruining it, but what I can say is that like the first book, this one is set on the private island of the super-rich Sinclairs, a family who summer there every year. Again the protagonist is an unreliable teenage narrator. Again, there’s loads of pashing and roses and beach swims, first loves and family tensions that criss-cross the island just like the boardwalks built between the family’s stately homes.

As far as vicarious holidays go it’s a mint one. There are staff, most crucially a chef to put together the picnic hampers. Fridges magically get restocked and all you have to do is turn up at the main house at 6pm and someone will hand you chicken and salad and sourdough bread, lemon mousse, an Old Fashioned. No child goes anywhere without a paper bag full of strawberries and crisps. Bliss! Let me live there.

Both books are full of rich characters and cleverly plotted, with hammerblow twists – Lockhart’s said she was inspired by Gone Girl, and John Green helped her tweak the ending. The teen voices are just right. The dynasty, the privilege, the lemonade: I was reminded of a Curtis Sittenfeld novel, and I fecking love Curtis Sittenfeld. (Allen & Unwin Children)

“I wanted to write a horror about climate change, without mentioning climate change or having any villains,” Gnanalingam told me, when I messaged him in raptures about this latest novel.

I didn’t get climate change at all. Instead what I got was my most enduring nightmare (so I guess in a way I did get climate change): via a set of extremely credible and mundane events, two little kids end up alone in their cruddy Auckland flat. Their mum’s away for a week. There’s barely any food. Not enough nappies. They can’t get into the bathroom, or reach the tap. No one’s going to be checking in on them. The big one’s only four and the little one has just turned two …

Of course there is other stuff folded in too. Race and poverty and the housing market and resentment. You know from the first pages this is a cracker. Gnanalingam steps us through the lives of the parents – a taxi driver being pushed past his limit; a woman trudging through another day of laundry and cooking and keeping the toddler away from the stove and next door’s dogs. The grinding knife-edge anxiety of it all. Eg:

She had hung the final shirt when she heard Aarani scream from the house. She sprinted inside. “What? What? What is it?”

Aarani was standing on the floor, looking at the TV. “Nothing Amma. I fell off the chair.”

Don’t react, don’t react. She was going to boil the kettle and have a cup of tea. Take a break for fifteen minutes. Except, Bhavan had started crying. The scream had woken Bhavan as well.

Last year Gnanalingam’s novel Sprigs, a brilliant story about high school rape culture, was shortlisted for the Jann Medlicott Acorn Prize for Fiction. I’m certain this one will do just as well, if not better. We’ve a full review coming shortly. (Lawrence & Gibson, $23)

See you back here in another month or so for a fifth edition of the Book Report; in the meantime I’m heading to the couch with Joan, by Katherine J. Chen (Hachette) which is a feminist retelling of Joan of Arc and which you should pre-order immediately if you’re into Circe and The Song of Achilles.