All we can do is brace for impact, writes books editor Catherine Woulfe.

Some people consider Sally Rooney to be a genius, a god, a gift to the novel as art form, and are still astonished that she didn’t win the Booker in 2019 with Normal People. Fine. Others think her books read like overly long stock image captions, or like Dawson’s Creek except an extra overwrought version where every character is Dawson. Also fine.

What you need to understand is that it doesn’t matter. None of it matters. Because in 51 days thousands and thousands of copies of her new novel are going to be laid out in bookstores and they are going to sell out in a snap and so another tranche will shuffle off the ships to take their place. And then another. And another. All the way until Christmas at least, through into January definitely, likely on through Easter and autumn and into the depths of winter. What you need to know is that today we teeter on the cusp of another Age of Rooney. 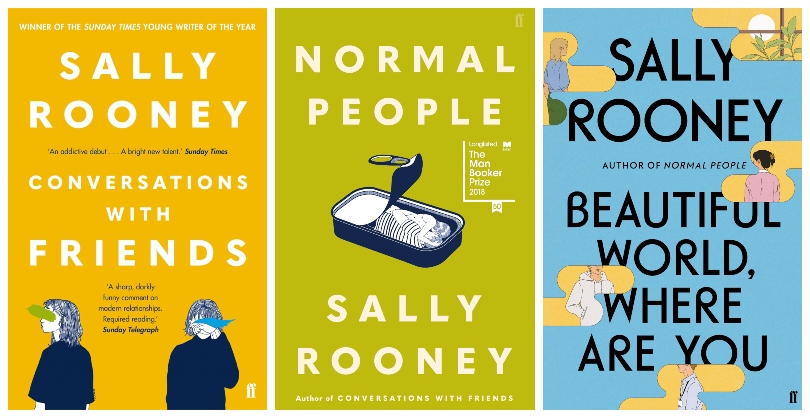 A quick recap. Rooney’s debut novel was Conversations With Friends. It came out in 2017 and has been in the Unity Top 10 charts 37 times. It was Unity Auckland’s second-biggest seller of the year in 2019. In what you’ll see is typical Rooney fashion it then clung on like grim death, retaining sixth place in 2020. Which is amazing.

But the smackdown came with Rooney’s 2018 book, Normal People, which became a Netflix hit circa lockdown 2020. People who did not usually read novels did read this novel, then stumbled back out into the world chorusing “Have you read Sally Rooney?” Normal People made Unity’s annual bestseller chart three years running. It also made the Booker longlist and there was much wailing when it didn’t advance any further. The Spinoff named Normal People our very best book of 2018, via a review in which Kim Hill wrote:

It was also quite a feat for booksellers to keep up. This from an Auckland bookseller: “Some novels become a monumental, unstoppable fad – suddenly everyone’s heard about them, everyone’s reading them, and amazingly, everyone seems to love them. Normal People was that novel. For months, it was impossible to order too many copies. We were always running out and having to pre-order piles more for customers – and piles of Conversations with Friends, too, as the second dose for Rooney converts.”

And here’s Kiran Dass, also a bookseller at the time, and more recently convening judge of the Jann Medlicott Acorn Prize for Fiction: “So much fire and buzz. Never in my 15 years as a bookseller have I seen a novel make such waves across such a diverse readership of all ages and genders. I talked to tweens to 94-year-olds who were hooked, it seemed to have such a wide and genuine gravitational pull. Adorable elderly couples were coming into the bookshop and asking for the books by name. They’d read a great review somewhere … and then they’d pop back in later to buy copies for their children and grandchildren.”

Dass herself was an early convert – twice she was given, and ignored, review copies of Conversations with Friends, dismissing it as “lightweight millenial crap”. Then she interviewed Olivia Laing, who sold her on Normal People. And Dass was a goner.

“I reviewed it everywhere and hand-sold hundreds of copies of it over 2018 and beyond. I went back and got a copy of Conversations with Friends … I felt like my inner world was being reflected back at me in a strange but familiar memento mori. I loved that hypersensitive line ‘the inside of my body was like hot oil’ … She so successfully captures that clammy claustrophobic feeling when you are inexplicably trapped in something that isn’t quite working but you can’t quite shake it off. The romantic gravitational pull, I mean. She studies the murky intricacies of emotional and sexual relationships, miscommunications, and how these are affected by class and power dynamics, in a way that is sharp and refined.”

But what about actual numbers? Allen & Unwin uses my most-hated phrase of all time to convey the bigness of Normal People. “We have now sold a whopping [shudder] 21,000 copies in NZ, and it’s still selling strongly. Almost half of these have been since the TV series hit our screens.”

And wait for it…

“We have much bigger expectations for Sally’s third book, as her popularity is still growing. We will have over 12,000 copies in-stores on publication (as compared to 1,000 copies on publication of Normal People) and we will be restocking stores in the months leading up to Christmas.”

Another number: as of Wednesday, Auckland City Libraries had bought 85 copies and if you want to read one you’ll have to wait behind the 178 people who’ve already called dibs.

But she thought two other books might just pip Rooney as Unity’s book of the season: Cloud Cuckoo Land, by Anthony Doerr (of Pulitzer-winner All the Light We Cannot See) and The Women of Troy, by Pat Barker (of The Silence of the Girls). Those two won’t get as much attention, McColl reckons, but they could quietly outsell her.

The extraordinary thing about this round of Rooney hype, though, is that all of the momentum is self-generated. The merry-go-round of reviews and interviews and think pieces is only just grinding into action – the only publicity I’ve seen so far is an excerpt in The New Yorker. This time, with this book, the hype is a freewheeling beast, a pure and easy thing: people simply want to read it.

The new novel is called Beautiful World, Where Are You. As per, it’s about pale and interesting young people being awkward and intelligent and falling in love, except this time the climate crisis looms explicit and large. I liked it much more than her other two. It’s out on September 7. Start the countdown.

Beautiful World, Where Are You, by Sally Rooney (Faber, $32.99) can be pre-ordered from Unity Books Auckland and Wellington.