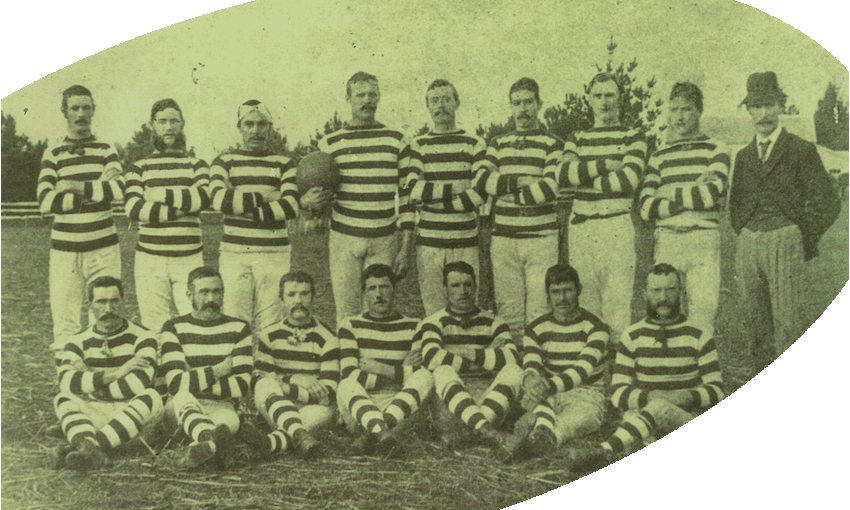 The Forgotten Coast: A Pākehā wrestles with his family history at Parihaka

By Rachel Buchanan
Guest writer
Made possible by

What stories do your dead tell you? How do you see your past? Those questions, posed by Parihaka scholar and historian Rachel Buchanan (Taranaki, Te Ātiawa), prompted Richard Shaw to write his memoir. We asked Buchanan to respond.

Two of my younger sisters were standing next to the kitchen bench with their heads down. One of them was crying, guilty sobs. They pointed at the table. A letter lay there, face down, flap open. When I turned it over I could see it was addressed to me. The New Plymouth Operatic Society said I had been selected to play Dorothy in the forthcoming production of The Wizard of Oz. This news was shocking; I had never been in anything before. I could tell from the angry looks I was getting that my sisters’ hidden talents had not been similarly recognised. “They didn’t even pick me for a munchkin,” one of them burst out.

It was unfair, obviously it was, because the three of us had done our vocal training together in the cupboard under the stairs at our old house in Gover Street. Abba, Boney M, Uriah Heep, our range was extensive. We topped our practice up with weekly singing at St Joseph’s. Still, there could only be one lead and this time I was it.

When the lights softened, I would hop onto the gigantic swing – the sole prop on the stage at the State Theatre – and sing ‘Somewhere Over the Rainbow’. “One day I’ll wish upon a star and wake up where the clouds are far behind me … ” The word “behind” was a very high note. Sometimes I hit it.

Next minute, the cyclone arrived. In the place of the swing, a small house on wheels appeared. I ran into it, preparing myself to face the stage hands, both teenaged boys. The house had no floor. I cowered on the narrow skirting boards while the stage hands pulled on ropes to make the structure whirl about at such high speeds that the wheels on one side, then another, would lose contact with the stage floor. I did not have to fake my screams  and after the storm had eased, my throat would be itchy and raw, a fact that may have aided the “husky-voiced appeal” of my singing, a quality singled out in the Taranaki Daily News review of the production.

While all this was going on, Richard Shaw – the author of The Forgotten Coast – would have been backstage or in the wings. He played the Tin Man.

I was about 11 then and too shy to speak to the cool older members of the cast, including Richard, so I never got to know him. He played a man with no heart and I played a girl with no clue, a child torn from her family and home by a massive natural disaster. Together with two other damaged companions (the witless Scarecrow and the cowardly Lion), we journeyed towards Oz, where the wizard gave us what we most wanted. For Dorothy, a way home. For the Tin Man, a heart.

Forty years on, Richard and I meet again in the pages of this wonderful family memoir, except this time he is the lead and I am a supporting actor. Like The Wizard of Oz, this book is also about three men, each of them either damaged – or damaging – in different ways.

Andrew Gilhooly, Richard’s maternal great-grandfather, was born in Limerick, Ireland, six years after the end of the Great Famine [he features in the rugby team photo, above]. He was one of 10 children of tenant farmers. In 1874, Andrew left his homeland for Aotearoa. He soon joined the Armed Constabulary and in 1881, Andrew was one of the 1589 men who invaded and ransacked Parihaka. For the next four years he was garrisoned at the pah as part of the post-invasion enforcement squad. Gilhooly eventually acquired three farms, 412 acres on confiscated Māori land, between Parihaka and the “Cape Egmont” lighthouse.

As Shaw puts it: “Andrew arrived in this country an Irish labourer and died a colonial landowner – and access to confiscated land was fundamental to this remarkable social and economic metamorphosis.”

The second man is Richard’s Uncle Dick. Andrew had married a fellow Irish immigrant Catherine (Kate) Fleming – who also came from Limerick – and Dick was one of their five kids. The children all went to primary school in Pungarehu but the money made from farming Māori land made it possible, in 1922, for Kate and Andrew to send Dick to high school at Sacred Heart College, an elite Catholic boarding school in Auckland. (Motto: Take Courage and Act Manfully.)

Dick was a devout and ambitious brain box who, by the time he was 21, had attained a doctorate of divinity from the “Pontificial Irish College” in Rome. His topic? “The essence and intrinsic evil of a lie.” He was ordained a priest at 22 but tuberculosis robbed him of the globe-trotting life that various Catholic bigwigs were mapping out for him. After two decades of ill health, Dick died in 1955, aged 44.

In his will, Dick left $200,000 to his two sisters as well as smaller donations to the Catholic church, a significant sum of money that Shaw guesses was his share of the family’s accumulated farming wealth.

The third man is Keith (Bob) Shaw, Richard’s gentle school-teacher father, who passed away in 2012. Bob also had TB as a child and, after the death of his mother (also from TB), Bob spent eight years at the Masterton Methodist Children’s Home. No money to hand down here but the delicate portrait Richard paints of his quiet, devoted Dad shows that there was plenty of love.

Bob’s fractured childhood meant contact with the Shaw side of the family was rare. Richard was far more connected to his mother’s people and, through them, to the wild part of the Taranaki coast between Ōkato and Ōpunake. “Although I have lived on the Coast only briefly, that is where my roots are,” Shaw says.

Now that Richard has unearthed – and owned – the regrettable details of his ancestor’s actions at Parihaka, his connection to the Coast is no longer simple but it is still strong. I envy that. Some of my dad’s people came from the Coast too but they were among the ones displaced by Richard’s great-grandfather and the other soldier settlers.

For uri of Taranaki such as me, all that is left of “the family farm” – the rich, green, volcanic land that was worked by our tūpuna – is complicated scraps of land owned by dozens of individuals or ahu whenua trusts, the administration of which is bound up in the Māori Land Court, a most challenging judicial forum.

It has taken me decades of work to find my way back to Taranaki and so help that lost girl inside me who did not know who she was or where she was from.

I feel deeply amazed that my work has helped Richard too.

The Forgotten Coast is heartfelt, poetic; a pleasure to read. I really like Richard’s honesty about the intergenerational privilege enjoyed by some Pākehā farming families: “The prosperity that flowed from the land has supported the endeavours of later generations in various ways; its shadow lies behind the purchase of other properties and houses, bequests to children, support with the costs of education, and so forth, on down the generations.”

The book taught me new things about Irish immigration to Taranaki, Catholicism on the Coast and even about Parihaka; the place that was the focus of my PhD in history and the subject of two of my books. I was unaware, for example, that Hori Teira (George Taylor) – who sold 98 acres of Parihaka land to Richard’s grandmother Kate – was one of journalist James Cowan’s key informants on the Taranaki wars.

The book also reinforced just how much we have lost. That eel Richard’s holding in the 1971 photograph (on the book’s cover) is a stupendous example of the creatures that were once plentiful in our waterways.

Like Richard, I will never tire of Taranaki, in all its beauty, tragedy and power. As Dorothy says, there’s no place like home.