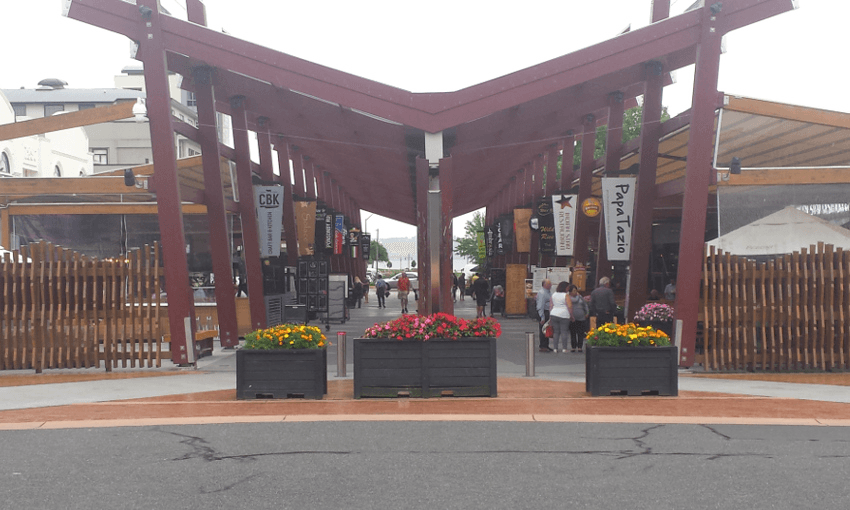 Exclusive: The return of Craig Marriner, the lost genius of New Zealand writing

Craig Marriner was a nobody who won the 2002 book of the year award with his first novel Stonedogs, a raw, rough, street-wise tale of bogan life. His second novel sank without trace – and so did Marriner, who disappeared. He returns after a long absence with an evocation of life and literature in his home town, Rotorua.

A bloke asked me the other day why it is that Rotorua has spawned the only two Kiwi novelists ever to “tell it like it is”. It’s an interesting question. Not least of all because it may well be bullshit. I take it up with my solicitor, calling him. He downs megaphone and running shoes, advising me to hold tight. Four minutes later his 84 Ford Escort comes rattling up my driveway, upsetting a crate of empties.

He leaps out, picking his bare feet around the broken glass. “You realise you can put these out the front and have them magically disappear nowadays?”

“Not if they don’t fit into this.” I wave at the council-approved tray.

“What’s all this about Rotorua novelists?” he demands.

“What do you think about it?”

“I think you’d best get in the car post-haste.”

I eye its rusted grill. “What for?”

“It falls to us to investigate.”

“Get in the fucking car already.”

The driveway is overgrown and he has trouble reversing, stopping to straighten a couple of times. “Never learned to back on your mirrors?” I ask.

“Never learned to use a weed-eater? Besides, do I look like a truck driver to you?” He’s a lump of a lad in rugby shorts, sweat smearing a Steinlager tee to his breezeblock back. “I’m not comfortable with that kind of stereotyping.”

He drops it into first and we’re off, crashing the stop sign on to Devon St, the engine smoking and farting.

“So who are the two local novelists in question?” he asks around the durrie in his mouth.

“Well…clearly Duff is one of them.”

“How about the second?”

He gazes longingly at a fish n chip shop. “I got nothing.”

“Rotorua novel and novelist? Youngest ever to scoop the NZ Book Awards?”

“Well, yes, Duff did it first. Then a younger, handsomer local topped the feat.”

“He hasn’t bought a round in years. OK book though.”

“Did it fucking what.”

It’s over 20 years since Rotorua’s Alan Duff booted the cosy Kiwi lit scene up its pallid jaxie, shining a light into the plight of poverty-wracked, urban Māori, with the harrowing Once Were Warriors. Then, a few years later, it was fellow local Marriner’s turn, his portrait of NZ race relations to standard Kiwi fiction what Manukau is to Wanaka. Both novels raised some hackles within the small, tight-knit scene. But, to its credit, it came down heavily in favour of them, celebrating the works with its highest honours.

We make a left on to Fenton St. The old home town looks not the same. The motels and hotels have spread like glossy mould. A branch of the NZ Cycleway lines the south bank, Asian tourists four abreast walking along it towards town. They step out to cross a side street, oblivious to the possibility of traffic turning down it.

Traffic like my solicitor’s 84 Ford Escort. “Good deed for the day?”

He times it perfectly, igniting the horn with a foot to spare, panic and squawking filling our side windows.

“Their embassies should pay us for that,” he sighs.

Car-on-Asian incidents are all too common along here. A goldmine for local panel beaters and hospital staff, but still.

We’re eating fried chicken on the Village Green when my solicitor says, “Back to our thesis. Look around. What do you see?”

It’s 5pm. I peer across Lake Rd at the Novotel. “Loitering guests?”

“What do you think they’re waiting for?”

“I suspect you’re about to tell me.”

“They’re waiting for the shuttles that take foreigners to watch people in grass skirts slap their thighs.”

“So over half of this city makes its living off tourism. And the tourists come to watch people in grass skirts slap their thighs.”

I advise him against this phraseology in too public a forum. But its hard to fault his broader point. Cultural shows, hāngi, marae visits, Rotorua abounds with it. And if you’re a local – brown, white, yellow – the city’s lifeblood is tourism.

“This berg has been pulling in the punters since Pink and White Terrace days. Locals have creamed the tourists here for more than a century. And money makes people get over shit.”

We drive through Eat Street. “Look at this place!” my solicitor marvels. It might not seem much to some, but to locals – whose CBD was for years so ramshackle and rough that tourist operators avoided it – this covered, pedestrianised plaza has quickly become the central city Mecca.

“Nor Duff’s,” says the owner/operator of a bar we drop into as he pours out three vodka shots. “Rotorua in the 80s was bleak, man.” He clinks glasses with us and we skol, the liquid hissing behind my eyes. “Māori flocked here through the 70s for the forestry boom. Then it died in the arse and marooned them.”

I suppose he’s got a point. My parents came here for the work; built on a quarter acre on one of the blooming subdivisions. I remember one of Mum’s bosses visiting. Peering about the neighbourhood of young home owners, she’d prophesied, “Welcome to the future slums.”

The publican asks me, “Did she call it?”

“Dunno. Aint been up there in years. I remember the work drying up though.” By the time I was in high school full-time forestry jobs were spoken of like White House internships.

My solicitor tries to pay for the drinks and gets refused. “The whole town suffered.”

I think of Jake Heke from Once Were Warriors, rootless, seething with resentment and inferiority, dampening his poverty with drink, searching for pride through violence.

It used to come to town after dark too, the CBD no place for the unwary, until quite recently, when police and CCTV finally cleaned it up after one too many attacks on tourists.

Don’t fuck with the revenue stream.

My solicitor drops another shot then grabs his coat. “Let’s go and see if your mum’s boss was right.”

We drive past past my old primary school. It’s on the edge of the suburb that centred Once Were Warriors. I’m saddened by the sight of the an anti-climb fence enclosing it. The hours I spent playing at that school after class and weekends would number in the thousands. I wonder where the local kids play now. A rugby ball sails over the car, a brown kid kicking it to a honky on the other side of the road. He takes it cleanly and spirals it 20 meters to another mate on a doorstep.

I’m thinking of that fence. “Is that so?”

“The city has the highest Māori-to-Pakeha ratio in the nation. Our schools are the country’s most ethnically mixed. Our kids are over their fear of the Other by the time they can read.”

He turns down the road that bisects Duff’s slum. I’d used to walk and bike all around here; in later years potter about in cars chasing weed. My family wasn’t exactly high on the hog, but it was easy to forget that my friends from down here lived different lives from mine. Until we’d stop in for lunch somewhere and the cupboards contained nothing more than half a packet of gingernuts.

But I wouldn’t walk around here now, never mind try and score. There are gang scarves I don’t remember tied to street signs. There are houses fully burnt out. We both double-take at that.

Up the way we pass by my old house and congratulate Mum’s boss on her prescience. The place is a neglected wreck, as are the others all around it. We drive on and learn that it’s the same all over. The slums have burst their banks and joined hands. Ten years of Toryism has turned the whole western third of the city into dilapidated rental land.

“And the worst of it,” my solicitor darkly mutters, “is that the people who should own these fucking dumps can’t even afford the rent on them.” Broken caravans on lawns; awning off garages…

We stop at a shopping centre. It was a scary enough place 20 years ago (I shudder at memories of parties around here being crashed and raped by carloads of gang kids), but now anti-crime signs cover the walls like billboards. “YOU ARE BEING WATCHED”, informs one of the them, camera balls hunching above it.

A passing youngster objects to my solicitor’s colour choice. He informs the kid that the colour red predates his little patent by roughly 14 billion years. The kid grumbles to himself and trots towards some larger chaps.

At which point my solicitor and I agree that our research has unearthed ample material, and we sneak looks in the rear-view as we head for parts paler.

Back at mine the punga fronds swish the windows as the old Escort whines up my drive. My solicitor follows me in, and I pour him a pint. “So,” I demand, “what conclusions do we draw?”

But he’s oddly subdued, and finally places his beer down unfinished. He goes out back and takes a long, pensive piss off my deck. When he returns he stops by my bookshelf. Sliding out some Duff and some Marriner, he tucks them under an arm and departs with barely a word.