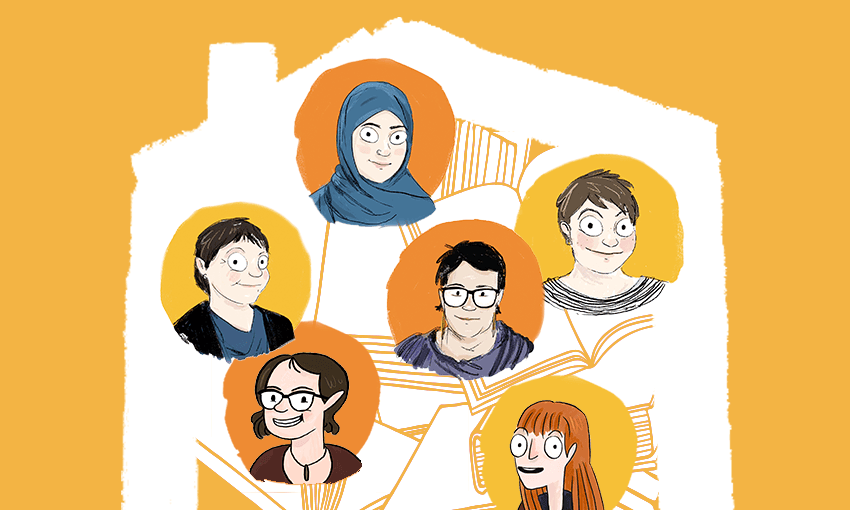 Books editor Catherine Woulfe on the website giving our kids’ books a home.

Children’s books matter. They matter to booksellers and publishers because they make up something like 30% of the market. But much more importantly, they matter to families. They make shitty sick-at-home days better, they make bedtimes better, they build bonds between grownups and littles, they build brains. They help kids become adults who love to read. They are a reason to sit down and turn off the world for a bit; they provide ritual, and pause, in a society sorely lacking both.

The very best children’s books matter in a way that’s something like magic. We carry them with us as we grow up, a box of paper talismans, and rejoice in bring out when our children have children and there are new bonds to build. Sometimes, too, they can help us honour already-beloved bonds.

As my father was dying I sat beside his bed and read him my favourite picture book. It’s called The Value of Believing in Yourself. The glue in the binding is failing and the pages are yellow and it’s about, of all things, Louis Pasteur inventing the rabies vaccine. I used to make Dad read this book to me over and over, and scold him when he tried to skip words. Reading it to him at 3am, his last 3am, as he breathed in and out and in, the words felt like a spell, like a blessing.

I’m saying all this because you would think, looking at Aotearoa’s media, that children’s books don’t matter. They get hardly any coverage or critique beyond cute potted reviews that get bundled up into a quarter-page as “five new books about kiwi”, or whatever. Often these are just a couple of hundred words, or shorter; barely more than a chirpy plot summary and a gormless “my kid loved it!” Reviewers seem to switch off their brains when they write about kids’ books. Hardly anybody gets stuck in. (Notable exception: Dionne Christian over at Kete Books, who goes hard.) Therefore nobody reads the reviews. And round and round we go.

There is one (1) media outlet in Aotearoa devoted to covering children’s books and doing it properly and that is The Sapling, a website that was conjured out of thin air by Jane Arthur and Sarah Forster in 2017 and carries the strapline: “We love kids’ books, and we take them seriously.”

The Sapling is now the home of children’s publishing in New Zealand. It’s built out of almost 800 essays and reviews and interviews and cartoons, all of them better than just about anything else out there, and all of them held in place by a vibrant and welcoming kaupapa. Women built this place – Jane and Sarah and a handful of others – week by week, around busy lives parenting and writing and bookselling. It wasn’t a job for them, it was an extra; they paid contributors before they paid themselves, and often missed out altogether.

The Sapling got me started on proper book reviewing, giving me the space, trust and open brief that helped me find my voice – I wrote for them about Lani Wendt Young’s Telesā series and Sherryl Jordan’s Winter of Fire.

The Sapling does not settle for fluff or for once-over-lightly and their commissioning is gold: last year they published a kōrero between Whiti Hereaka and Gavin Bishop; they’ve published Cassie Hart interviewing Shilo Kino, they published Steph Matuku untangling what counts as a Māori story. “Our writing should encompass all genres and themes and worlds and structures. It should be whatever the hell we want it to be. But we need to give ourselves permission to do it, to break down those self-imposed boundaries. To be proud and excited that no matter what we write, it’s a Māori story … “

They have published a series profiling librarians of Aotearoa, and one on booksellers. They put out a bunch of great and weirdly specific lists to help parents and librarians pick up new books for their kids – books on experiences of disability; on starting school; on New Zealand nature guides.  Importantly, they make proper space for illustrators; cartoonist Giselle Clarkson is a fixture. They have always placed a real emphasis on Te Wiki o te Reo Māori: they publish a te reo version of each piece first, and drop an English one a day later. A couple of years ago, for that week, Nadine Anne Hura stepped in as a guest editor.

I think my favourite piece is an essay by Sarah, calling out the creepiness of the dude Alex Archer ends up with in Tessa Duder’s iconic Alex series: “Tom is eight years older than Alex, but that doesn’t stop him immediately falling in love with her. This, as an adult, made me uncomfortable, as do a lot of the things he does: blagging his way into the Olympic compound in disguise as a translator, watching her train, acting as tour guide after getting others to trust him; these are all what we’d call ‘grooming’ in our current era, given the power imbalance.”

I knew the editors were getting burned out, but I was still stunned in October last year when they announced they’d hit the wall. On Twitter: “The Sapling is dead, long live The Sapling. Just kidding. The Sapling is most certainly not dead – but we have run out of puff, and we are taking a break…”

And from their newsletter: “We have had to make this very difficult decision to help us pursue better balance in our workloads, family life, and wellbeing. However, we are hoping to take the next few months to rebuild the site, and seek to make the operation of it more sustainable.”

The editors undertook a survey, asking readers for their ideas and feedback. They planned for a glorious resurrection in August, in time for the announcement of the winners of this year’s New Zealand Book Awards for Children and Young Adults. They applied to Creative New Zealand for money to pay their contributors and editors, as well as cover running costs. They’re good at these applications; they were awarded $30,000 in 2018, $36,000 in 2019, $43,000 in 2020. What they asked for this time was not wildly out of line with those amounts.

But last week they discovered they’d dipped out.

While we are sad to say we missed out on funding this time around, we want to congratulate our wonderful @giselledraws and the talented David Riley, and all the other artists and writers who got funded. We don’t know what is next, but we know we’re still needed and we will return

We don’t know why, at this stage. I just hope the assessors didn’t consider the hiatus a sign of flakiness: surely, after the last couple of years, knowing when to step back and regroup – and doing so with forethought and grace – should be considered a strength, not a weakness.

The editors have already sought permission to apply again in the next round.

The children’s book awards finalists were announced early this month and of course Sarah at The Sapling had a comprehensive piece ready. She read all the books and ordained her favourites and pointed out a few notable omissions and introduced us to the judges and she did all of that with decency and great readability. Keep in mind she also did this with zero funding, around her fulltime work in comms, via a site that’s allegedly on ice. She did it because she cares very much.

The Spinoff cares too, of course, and we give proper coverage to children’s books whenever we can (see our tribute to The Hunger Games, our profiles of Graci Kim and Chloe Gong, our patriotism as regards Hairy Maclary, our monthly children’s bestseller charts). I’ll go on and on about children’s books given half a chance. But there’s no substitute for focus and specialist knowledge, and time. Embarrassing case in point: this year I haven’t got to reading all the book awards finalists, let alone writing about them. (My only cogent thoughts so far: The Eight Gifts of Te Wheke by Steph Matuku and Laya Mutton-Rogers should absolutely take out the picture book category, and Spark Hunter by Sonya Wilson the junior fiction – both of these are triumphs. Gavin Bishop’s splendid Ātua is my pick for non-fiction, and for the Margaret Mahy Book of the Year.)

So I urge you to head over to Sarah’s piece at The Sapling, and then have a nosy around in the big joyful house of kids books she and the other editors have built these last five years, and show them and the riotous cacophony of children’s publishing talent in this country that you care very much, too. Maybe you could even write a letter of support to the editors, to help them get across the line in the next CNZ round. And then, I suppose, cross your fingers. Long live The Sapling.