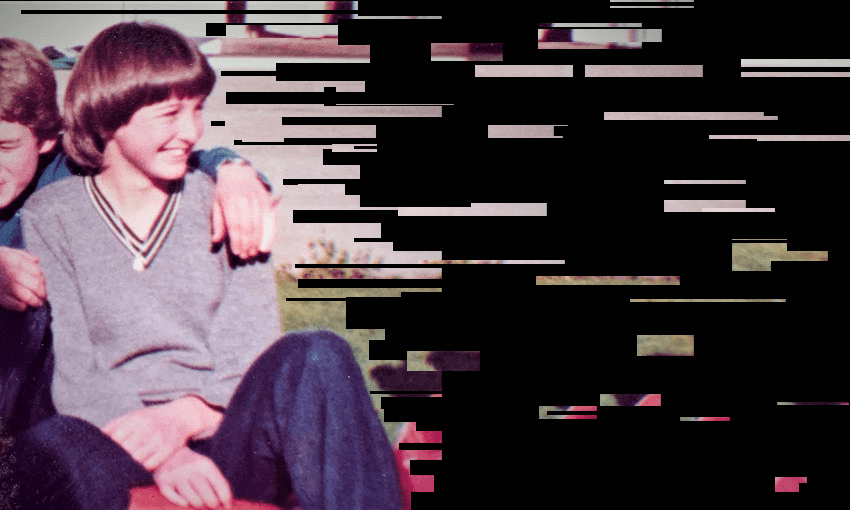 Memoir of a hypersexualised youth

By Paula Gosney
Guest writer
Made possible by

Paula Gosney is writing a memoir about rape, addiction and trauma that flows through generations. In this excerpt she attends a Napier school reunion, and realises how her childhood and adolescence set her up for a fall.

A class reunion is like picking a scab. If you pick it too soon the injury bleeds, needing to heal again. If left long enough, the wound is clean and smooth – it’s not perfect, but it is stronger and more resilient. I was 45 years old before my wounds had healed sufficiently for me to risk a reunion of the private girls’ boarding school I attended from 1980 to 1985.

We agreed to meet at an affordable motel in Napier. Some of the girls were sharing rooms; I booked my own. I sat straight-backed on the edge of the musty motel bed, within the safety of the thin walls, my stomach churning as I listened to the muster gathering outside.

Many of the women lived in the area and had remained friends over the decades. Not me. I had fled, putting the Tasman Sea and rivers of alcohol between us. Before walking to the door, I checked myself in the mirror and straightened my clothes. For a moment, my hand rested on the knob, my forehead against the wood, 11 years old again.

Our initial meeting point was Anita’s room; a couple of women were already in there when I appeared. I don’t think anyone thought I’d come – the black sheep. Perplexed expressions were masterfully replaced with smiles and hugs as more women arrived one by one, nervously poking their heads into the open space. Blow waves had replaced ponytails, deep sidelines now bracketed spidery lips, and crow’s feet counted the years. Faces morphed in and out as if an unfamiliar woman and a girl chiselled from my memories occupied one body.

Anita – her face still round and smiley, her blonde curls still bouncy – had been exceptionally organised, a prefect. True to form, she had amassed photo albums of our school years. Old sticky albums with cellophane over each page, crammed with photos snapped on the inexpensive cameras we were all getting for our birthdays at the time. Grainy, four-by-six pictures, with curved corners and a distinctive greeny-red hue.

The albums were the perfect icebreaker, all of us poring over them laid out on the hotel beds, shrieking with laughter at our 80s perms and high-riding jeans. I turned a page, my hand stopped, I froze. All the sound sucked from the room as though everyone had disappeared; there was just me and this old album in my suddenly sweaty palms. There I was: a long-legged sassy young thing, mucking around on the lawn behind the junior boarding house. Our bathroom towels laid out on the grass for sunbathing, a cassette deck to the side, a half-empty bottle of baby oil. It was an unremarkable photo, except for one thing. I stood out like a hooker in a nunnery. All the other girls were clad in tighty-whiteys, or some other age-appropriate underwear. Not me. I was unashamed in all my glory, young pubes on display through the few centimetres of pink mesh I’d mistaken for underwear. Who the fuck gave me a mesh G-string at 12?

I said to Anita, sitting next to me, “Oh my god, look at my undies.” She didn’t raise an eyebrow. “You were so far ahead of us all. We were in awe of you.”

Champagne and hilarity bubbled around me. Excruciating memories flashed.

“They call you Bucket Paula.” A senior girl, managing to laugh and sneer at the same time as she handed me the letter from the boys’ college.

“Cause your cunt is the size of a bucket.”

That word was hardly used in the 80s, and I had never heard it directed at a person – I barely understood what the slur meant. I had, however, absorbed from the way women were spoken about in my home and on the farm that having a big vagina meant you were a slut, and being a slut was something to be ashamed of.

“I haven’t even done anything.” I turned away, pretending I didn’t care, eager to hide the heat on my cheeks and get back to my dorm to read my letter. But I did care. Hot tears pricked my eyes as I marched back to the dorm. Arseholes!, I thought. All I had done was exchange a few saucy letters with an eager boy who was my age. I told myself the spiteful seniors had made it up because they were jealous. But the branding hit hard and true, aggravating old wounds.

Seeing myself in that photo was like a piece of a Tetris puzzle falling into place. I was aware of my young sexuality but oblivious to the path I was set upon.

My whole adult life, I wrestled with this dissonance; why was I so much more sexual than all the other girls around me? Was it genetic, hormonal – was I an outlier on a bell curve? Why were my sexual boundaries blurred? Was this done to me? Or are those two ideas somehow linked? Did my young, overt sexuality attract predators, or did my hyper-awareness of mens’ desire and the power I felt bring that promiscuity out in me?

I asked myself in a diary entry aged 13, “Why do grown men like me?” I now know that is not a normal question for a young teen. The burden of that question defined my early life and fuelled some terrible choices, choices that took me from an untroubled child building huts in our hay shed to a junkie who could score hammer off the streets of Cabramatta with the lift of an eyebrow.

I graduated from Auckland University in 2020 with a Master’s of Creative Writing and am in the final stages of writing a memoir, Bitches, Bikes and Honeys. The three words used by my father to describe women.

My story focuses on my years in Sydney, leading a double life: one as a successful professional, the other a heroin addict, relentlessly trashing my body as the worthless object a rape taught me it was. I explore my childhood on a farm in Taranaki, being sent to boarding school at 11 – never to live at home again – and the impact of my hypersexualised youth.

I am not writing a memoir because the idea of sharing my intimate secrets is particularly appealing. I’m telling my story because I believe the sexualisation of young women is getting worse, not better. The #MeToo movement has created an accountability framework but has done little to slow down the social media tsunami that has young girls reduced to Instagram-ready tits and arse. There is a damaging cost to this rape culture, and I would like to be part of the conversation.