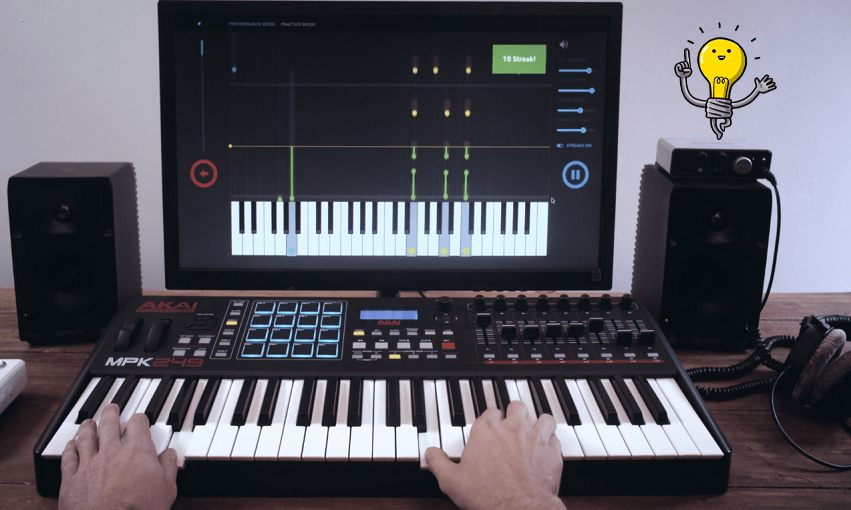 Melodics is the Duolingo of learning to play music

In our Q&A series, The Lightbulb, we ask innovators and entrepreneurs to tell us about how they turned their ideas into reality. This week, we talk to Melodics founder Sam Gribben, who’s created software to help people learn how to play musical instruments.

Having spent a decade at audio software company Serato, ex-CEO Sam Gribben was ready for something new. He’d noticed that changes were happening in the learning industry and decided to apply these changes to an area he was passionate about: music. So he left Serato and launched Melodics, a free-to-download software that teaches you how to play keys, pads and drums from a computer in your own home.

As Melodics gets set to launch another investment round this month, Gribben shares the story behind his lightbulb moment.

First of all, give us your elevator pitch for Melodics.

Melodics is a software that helps people learn how to play musical instruments. It does what a good tutor would do by listening to you as you play, analysing what you need to work on in order to get better.

But it’s also about helping people to stay motivated to keep practising. The thing with learning to play instruments is you need to practise to get better. But a lot of people give up because they just don’t really practise enough or they don’t really see the benefit, they don’t feel like they’re progressing. So we do a lot to help people really enjoy practising and making it fun.

What were you doing prior to Melodics?

I was at Serato for 10 years. I got into that because as a student, I studied electrical engineering. [At the time], I was really into DJing and I had this idea that it would be super cool to be able to DJ with vinyl but control the music on a computer. I was really obsessed with the idea but I wasn’t a good enough engineer to actually do it.

Fast forward 10 years: I was living in Holland and through a string of amazing coincidences, I found out that there were these people in Auckland who had cracked that problem. So I came back to New Zealand and they gave me a job. The founders of Serato are geniuses. They made this software that I think really changed the whole industry.

And then how did the idea for Melodics come to you? What was your lightbulb moment?

I’d been working in the industry for a long time and had made a whole lot of contacts, particularly with companies making musical instruments. What I saw was that there was this really big change happening in education. Digital technology was changing education in a big way, but not much in the field of music learning.

Often you can find good things when you see trends in one industry that can be applied to another. In particular, I saw there were things happening in the field of language learning. There was an app I was using called Duolingo which had a really interesting approach to language learning and I thought, ‘why is no one doing something similar with music?’ I had a look around and there were some people doing similar things but I didn’t feel like anyone had really nailed it yet.

Because I had these really good connections with companies making musical instruments, I realised I could work with them because it would solve a problem that they had as well. The problem was that lots of people wanted to learn how to play an instrument but so many people try and give up. So by working with [these companies], it would help those guys have more happy customers and sell more instruments.

They ended up really getting behind us in a big way. A big part of our success comes from working with all those companies.

This was like four years ago. I left Serato in 2014 and spent the rest of the year sounding out the idea. In 2015 we started building it and launched at the end of 2015. We started with finger drumming which is kind of this weird niche within electronic music. A friend described it to me as ‘Guitar Hero for drum machines’, which is pretty appropriate.

Just over a year ago we launched a new version that supported the keyboard and electronic drums. So we’re expanding out. We started really small so we could be focused and now we’re expanding it out to bigger markets.

So how did you go about making your idea into a reality?

One thing I think that’s different for Melodics are those relationships we have with instrument makers. Before we started building the product, I went to them and said, ‘if we make this thing, and if it’s good and you believe it works, will you help distribute it?’ It was very much non-binding because there was a big “if”, but they agreed because they wanted this product to exist. The biggest challenge for any startup is overcoming your obscurity… and we’d already addressed the problem.

So we did that and then raised some money. Our lead investor is a company called Ableton from Germany and they make software for making music. They have an amazing reputation in the industry so [having them on board] opened a lot of doors for us. We then started building Melodics and released it in October 2015.

Shortly after we launched, we had these big brands promoting us which made a huge difference to our early success.

You said that Melodics motivates you to keep practising by noticing what you need to improve on as a real tutor would. How does it do that exactly?

We have a recommendations engine that listens to how you play and then recommends certain lessons to you. I like the analogy of what a good tutor sitting next to you would do. They’d say, ‘okay, I can see you’re struggling with this. How about we try this exercise instead?’

We also have a lot of motivational mechanics which you’ll recognise if you’ve ever played computer games. A big part of our message is that a little bit of practice every day is way better than a big chunk of practice once a week or once a month. So we have these rewards in place where if you play multiple days in a row, you get on a streak and you’ll get badges. It really works because this is something people want to do – people want to learn an instrument – and these little mechanics help motivate people that little bit more.

In that sense, it’s very similar to Duolingo.

What have been some of your biggest challenges since starting Melodics in 2015?

Over the last year and a half, the team’s grown to about 20 people and we’re looking to hire more. Hiring people is always hard because of the size of New Zealand and the pool of people we have here.

Raising money is also quite challenging. The investment scene is pretty small but I think it’s changing. An interesting thing I’ve noticed is how Australian venture capitalists and investors are quite interested in New Zealand [because] we’re punching above our weight per capita.

There have been enough big companies now in New Zealand that people have come out of it with enough experience to start their own companies. The success of Trade Me helped companies like Vend and Xero get off the ground, while Melodics is like a spinoff of Serato. So that’s really interesting to foreign investors.

Is Melodics profitable yet? What sort of numbers are you bringing in?

We’re not profitable yet, we have 350,000 users. Bundled with 2.2m musical instruments a year

It’s going to be quite a big year for us. We’re going to be raising another investment round quite soon. Our Series A is about to kick off [in May] and that’s going to be a big deal for us, taking it up to the next level.