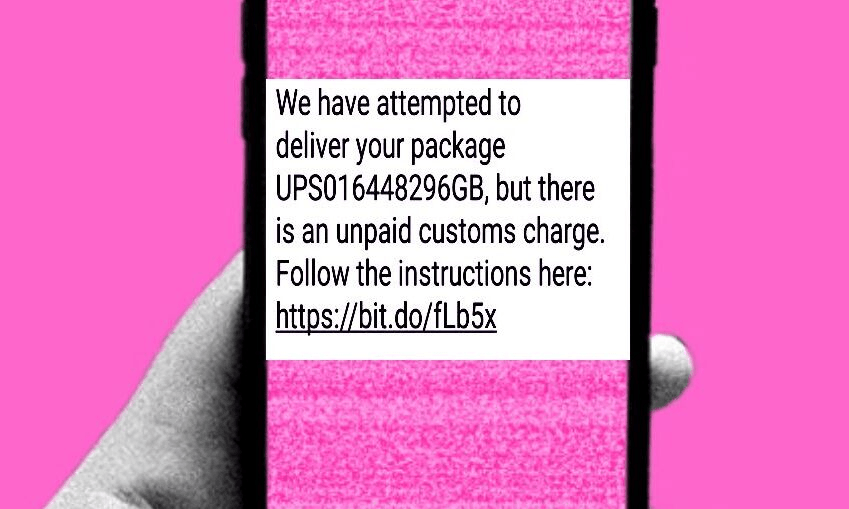 Did you get a weird text about a UPS package? It’s probably a scam

Just in time for fraud awareness week, a new phishing scam is sweeping through the mobile phones of New Zealand. Alex Braae reports.

If you get a text purporting to be from UPS telling you a package is waiting for you, and they just need an unpaid customs charge, don’t click the link.

It’s part of a new phishing scam sweeping the country, which has the potential to take “significant financial loss” from victims, the Department of Internal Affairs has warned. Hundreds of people have so far made complaints about the messages.

The scam begins with a text message, generally carrying some variation on the following words: “We have attempted to deliver your package (code number) but there is an unpaid customs charge. Follow the instructions here:” This is followed up with a link, which is the trap.

Here’s an example of the message, as received by a Spinoff staffer, from a number with a +61 (Australia) prefix:

The DIA release outlines what happens next: “The webpage will prompt the recipient to confirm redelivery of the parcel and advise them a $2-$3 fee that needs to be paid.”

It continues: “The recipient will instead be directed to a ‘special offer’ page in the same styling as amazon.com, offering the latest smartphone at a heavily discounted price and prompting the recipient to provide personal and financial information.”

For many it won’t need pointing out, but just in case – there is no special offer. The goal of the scammers is to get that personal information, and turn it against the victim.

Simply by having that information – especially things like credit card numbers and 3-digit CVS security codes – the scammer can instantly access pretty much any money that is attached to that card. Personal information – such as email login details – can also be used to turn a person’s account against their friends and contacts.

The advice from DIA is simple: “If you receive a text you were not expecting or a text message from an unknown sender, do not click any hyperlinks included in the message. Simply report the text spam for free on your phone by forwarding the spam text message to 7726.” Keep hold of the phone number that sends the message, so you can pass that on too.

Overall, New Zealanders lose between $20-30 million every year through scams and other types of fraud. But that’s likely to be an undercount, because a lot of this type of crime is never reported.

“Many people who have been scammed are too proud to make a complaint, as they may feel embarrassed or silly about getting ‘sucked in’,” said Detective Superintendent Iain Chapman, National Manager of the Financial Crime Group.

Chapman said the cliche around Nigerian princes offering you a share of a huge inheritance isn’t really what online scams are about any more – the scenarios used are more subtle and realistic.

“Take the time to stop and think for a minute when you’re confronted with a possible scam situation – especially when you are contacted unexpectedly and asked for your personal information, he said.”

“Sadly, scammers are getting smarter and their scams are becoming more sophisticated. They are preying on people’s insecurities, and in some instances, appealing to people’s desire for some ‘easy’ financial gain – for example, by promising cash for helping the scammer do something.”

It’s currently fraud awareness week, so make sure you keep your eyes open to people trying to catch you out online.

Have you received this scam? If so, please email alexbraae@thespinoff.co.nz with your credit card number, CVS code, mother’s maiden name, the name of your first pet, and your favourite account passwords. Complete answers will win a cash prize.