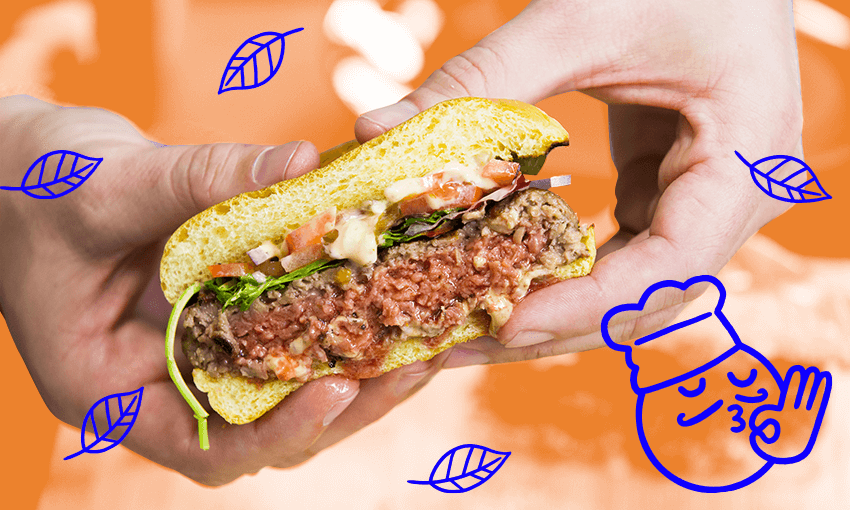 Impossible’s patty bleeds, just like one made from real beef. Image: Archi Banal

Is New Zealand ready to eat the Impossible?

Impossible’s patty bleeds, just like one made from real beef. Image: Archi Banal

The biggest name in plant-based meat has landed in Aotearoa. It’s about to cause some beef.

“It’s completely mind-blowing,” says Sophie Gilmour. The owner of Fatima’s has only been on the phone for a few moments, yet she’s already running out of adjectives to describe something that appears to be a little bit like magic. “It’s like they’re playing a trick on your brain,” she says. “It’s so clever … that’s their genius. It feels impossible. There is no difference.”

For the past five months, chefs at Gilmour’s Auckland Middle Eastern restaurant chain have been meddling with their koftas. Ground meat goes into a mixing bowl with spices, ginger and coriander, and is then shaped and fried. These are served in two ways, in a pita pocket with harissa, tzatziki and pickled cucumber, or on skewers with spicy tomato sauce and garlic yoghurt.

The twist? The ground beef Fatima’s uses to give their koftas a meaty texture doesn’t come from cows. It’s from Impossible, the biggest and coolest name in the plant-based craze. Lab-designed, made in California, then shipped to Aotearoa, Impossible’s arrival in supermarkets this week has many chefs smiling, vegans frothing and beef and dairy farmers probably feeling a little anxious.

After a trial run in select restaurants, the first Impossible product, a plant-based burger patty, can now be found on shelves at 200 Countdown stores. Mince meat, like that used in Fatima’s koftas, is coming later in the year, and fans will be hoping Impossible’s full range of plant-based products – pork, sausage, chicken and even nuggets – joins them shortly.

It’s a brand Gilmour believes is here to stay. Fatima’s Impossible koftas are so popular – “they pop off in Ponsonby” – they’ve become a permanent menu fixture. She raves about the product’s resemblance to regular beef. “It looks and cooks and eats like mince,” she says. She’s had no trouble winning over customers, or staff. “Half of them are vegan. They’re jazzed about it.”

They’re not the only ones. At Burger Burger, a $19 Impossible burger sold out at all five stores on launch day. “I’ve been chasing Impossible Foods, trying to get them on the menu, for five years,” owner and Sophie’s sister Mimi told Stuff. Customers are loving it. “Just like meat and so tasty with just the right amount of patty, pickles, cheese and sauces,” wrote one on Instagram.

New Zealand fans have been waiting for this moment for years, ever since Impossible launched in Californian restaurants to rave reviews in 2016. It’s taken this long because New Zealand’s a small market, but also because a key ingredient in Impossible beef, heme – a genetically engineered soy ingredient that makes Impossible products bleed like beef – wasn’t approved  until 2020.

Over that time, the market for plant, pea, kūmara and soy-based meat alternatives has exploded. Veganism is on the rise and increasing numbers of meat eaters are trying to eat less of the stuff for the good of the environment. Most supermarkets have dedicated chilled sections full of vegan and vegetarian sausages, bacon and burger patties. New Zealand’s own innovation Sunfed is a popular chicken alternative made of yellow pea protein, and Off-Piste offers jerky. At $12 for a two-pack of patties, Impossible is among the most expensive.

How will it fare? “If it doesn’t taste good, it doesn’t really matter,” says Nick Halla. Impossible’s senior vice president of international, who joined the company as its first employee shortly after Patrick O Brown founded Impossible Foods in Silicon Valley in 2011, is beaming in via Zoom, with travel restrictions keeping him away from Impossible’s Aotearoa launch. Inferior products have built up consumer disappointment, he says. “We have this anxiety built up, [that] if it comes from plants, it’s not going to be good.”

That’s not the case with Impossible. Many meat lovers are unable to spot any difference to the real thing. That’s the key to winning over New Zealand’s massive meat-eating population, says Halla. “What we see is consumers pick it up pretty quickly, whether it’s, ‘I’m going to overhaul my diet,’ or, ‘I’m going to replace [meat] once a week,'” he says. “I think pickup will be very quick.”

That could be concerning news to one particular sector: New Zealand’s massive beef and dairy farming community. If too many people eat Impossible products, it could affect their livelihoods. Is Impossible coming for them? “I think it’s an opportunity to think about where agriculture and farming are going to go,” Halla warns. “It’s getting harder and harder. Prices are going down, pressure on the system’s going up. It’s an opportunity for innovators, for building food a better way.”

If that sounds like fighting talk, that’s because it is. Everyone knows what’s at stake: the climate. “Food production accounts for one-quarter of the world’s greenhouse gas emissions and takes up half of the planet’s habitable surface,” reports carbonbrief.org. Beef is among the worst emitters. Things need to change. “We can’t feed the world this way, even if we wanted to,” says Halla. “As incomes rise, meat consumption rises too. We don’t have the land and resources to feed [the world].”  Impossible products use 96% less land, 87% less water and emit 89% fewer greenhouse gas emissions compared to beef. Converting diets, and minds, while helping the planet survive, is Impossible’s mission impossible.

The only way to do that is to make a better product than meat. The reviews are in, and Impossible’s already passing the taste test. Celebrity chefs like David Chang love it. Impossible’s already appeared on The Simpsons. It has rave reviews across the board. Even dietitians think its protein and vitamin levels are pretty great. According to CNBC, the brand is worth $4 billion.

All that positive press means Impossible’s landing in Aotearoa with Tesla levels of tech cool. That’s entirely by design. Halla talks about their products levelling up like an iPhone. “We went from [version] 1.0 to 2.0 in 2019,” says Halla. He admits the company has a Silicon Valley mindset. “We should be getting better with our food system,” he says. “Many of our recent product launches are starting to beat the animal in taste. We launched our chicken product recently. In blind taste tests, Impossible is preferred over the meat counterpart.”

It’s impressive, but so far, there’s one product that no one, not even Impossible’s chefs and scientists, have been able to replicate using plants. There’s nothing quite like an eye fillet steak, grilled to perfection on a Weber barbecue, on a hot summer evening. Is it coming? “It’s completely possible, it just takes a bit more work to do,” Halla says. When pressed, he laughs and says: “There’s nothing to announce right now.” He might as well wink at me. Halla’s probably already taste-testing version 2.0.