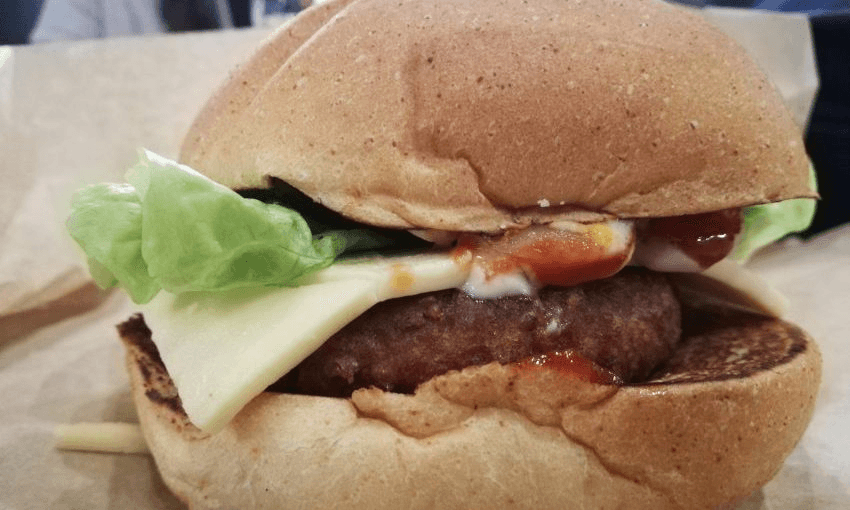 The beyond burger, pictured moments before being eaten on Thursday evening

The Spinoff reviews New Zealand #63: The meat-free Beyond Burger

The beyond burger, pictured moments before being eaten on Thursday evening

We review the entire country and culture of New Zealand, one thing at a time. Today: Toby Manhire tries the freshly launched burger at vegan fast food outfit Lord of the Fries

Meat. On the one hand it involves the institutionalised slaughter of animals, carries a range of grave health risks and presents a menace to the future of the planet. On the other hand it is very delicious.

For some time humans have attempted to resolve this quandary. In Han Dynasty China they came up with tofu, which was a good effort but unfortunately it is horrible, not only because it isn’t remotely like meat but also because when you see it for a moment you think it might be something heavenly like feta or halloumi but it is not, it’s horrible tofu.

Food wizards have since tried a bunch of alternatives, from lentils to quorn to whatever it was that Linda McCartney was into. These all tasted like a lot of things, but not really very much like meat. Lately, however, we’re getting closer. In recent times McDonald’s have rolled out a vegan burger. Kentucky Fried I-can’t-believe-it’s-not-Chicken is in development. And the colossus of British supermarkets, Tesco, recently started selling steaks built out of wheat and soy, which reputedly look, smell and taste like real steak, and to be honest if that’s true the New Zealand economy is probably finished.

One of the latest post-meat endeavours arrived this week in Auckland, in the form of the Beyond Burger, a pea-protein-based rival in the vegan burger wars to the Impossible Burger. It was launched at the new Britomart branch of the vegetarian fast-food outlet Lord of the Fries, which for reasons I do not understand has named itself after a story about humanity’s descent into a base state of nature involving the murder of wild pigs and children. The event, in Snickel Lane, was hosted by New Zealand’s leading vegan feminist Richard Hardcore. At one point he said that good vegetarian food gives him “a boner” but I’m relieved to report he did not fuck a hamburger.

The Beyond Burger was good. A quality bun, just doing an honest containing job, like a bun should. Tomato, lettuce, onions, sauces: good. Jalapenos in the spicy option: good. Cheese: not good. I don’t know what it was made of but I wanted to waterblast the roof of my mouth. So pallid I swear I would have swapped it for bloody Alpine.

But what about the patty? That’s the crucial question here. What about the patty? The patty is good. I mean, it’s not a posh-burger-joint kind of patty, it doesn’t attempt to resemble the beefy number you might get at, say, Burger Burger or Burger Wisconsin. But those will cost you something like $15-$20; these are more like the up to $10 variety. Stick it alongside a bog-standard fish-and-chip-shop burger or a Maccas burger, or even something from the White Lady – which is parked jealously across the road from LOTF on launch night – and it stacks up extremely well. The texture works, the flavour is quietly impressive and it’s even persuasively juicy.