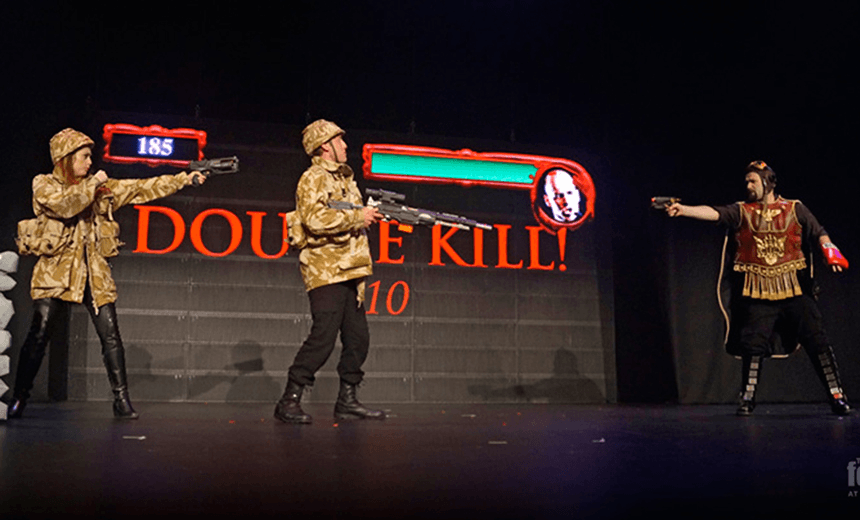 HAMLET: The Video Game is bizarre and beautiful

Eugenia Woo reviews HAMLET: The Video Game, a brave attempt to bring together the disparate worlds of gaming and theatre.

HAMLET: The Video Game – A Shakespearean Stage Show is a mouthful. It’s also got all the earnestness of a high school production, with none of the good-natured missteps or overbearing parents being idiots in the cheap seats. Simply put, it’s a breath of fresh air from director Greg Cooper and the Court Jesters which kept both kids and their adult chaperones in stitches for most of its runtime. The production which made its way to Auckland this week is the second iteration of the stage show and was originally conceived by Simon Peacock of Assassin’s Creed fame (the game, not the film travesty). While the cast is smaller now, it packs an improbable punch and a wildness that toes the line between bravado and being rudderless.

One wouldn’t ordinarily think that Shakespeare would be a natural fit for video games, but the crew behind HAMLET: The Video Game was firing on all cylinders when it came to integrating the two. Not content with the product of the stage show itself, stepping into the foyer of the Herald Theatre was like stepping into a nicely furnished net cafe that doubles as a wine bar. Computers were dotted around the box office and while the crew could have very easily used them as empty props, each machine showcased a different game made by some first-year students from AUT. The glue that bound them all together was the fact that every single game was based off a Shakespearean work.

Whether it was a means of assuaging people’s fears or a metaphor used to bludgeon them into accepting the coupling of video games and good ol’ Billy Shakespeare, who cares? It worked. The games on display clearly whet the audience’s appetite for the actual show, and it was a surprise to see snotty ten year olds and wine mums alike get into the spirit of the main event. A standout was A Fairest Forest (the brainchild of Mary Xu, Dee Sapeta, Celine Chan and Monica Zhang) with a female protagonist and heavy RPG influences interwoven into A Midsummer Night’s Dream, while plenty of foot traffic found its way to Stegan Januszkiewicz’s King John, based on the play of the same name and built around detective work and dungeoneering.

Once the curtain (in this case, a loading screen) rose on the play, however, any preconceptions the great work outside may have created were swiftly forgotten in favour of an opening that few would have ever considered – a pun-heavy, bombastic start that established HAMLET’s gaming credentials and slotted its expectant audience right into the thick of things. The play started off mirroring the beginning of a single player RPG campaign and continued in that vein until its end, and the predictable narrative structure turned out to actually be a great fit for a classic like Hamlet. The writers clearly saw no need to reinvent the wheel when the themes of a Shakespearean tragedy were as obvious as any Final Fantasy game, and cutting out the plot tweaking that often happens with adaptations of adaptations meant that the play could focus on what it does best: mocking itself.

Every joke was delivered with slapstick precision and flair, and at times the momentum from the brilliant performances of Kathleen Burns, Jared Corbin (oscillating wildly between a Wolfenstein villain and a Goomba wrangler) and Dan Bain appeared to drive them into the territory of improvisation, which only added to the excitement. No game was spared, whether it was Angry Birds or Tomb Raider, and all references were delivered with knowing winks and jostling, only matched by audience members’ audible groaning. The stream of puns turned into a veritable torrent as the production drew on, and while originally the references were a brilliant homage, it did begin to wear a bit; it became harder to maintain immersion when Hamlet’s soliloquys would be interrupted by titles that seemed out of place. However, what could have been a drag was saved by the addition of two continuous video game parodies: a one-man orchestra riffing on some classic theme tunes, and an interactive UI that responded to the characters’ and the audience’s wishes.

The strength of HAMLET really lay in its ability to harness the energy of its incredibly broad target audience. Anyone could have enjoyed the wordplay and the satire, even without any video game exposure at all. Greg Cooper mentioned that it was hardcore game references or bust, and it was a treat to see that he stayed true to his word whilst keeping the show as accessible as possible. Audience members were pulled in by dramatic pauses and flourishes, invited to change everything down to the very costume that Hamlet was wearing (a SWAT vest was available) and encouraged to contribute to the doomed protagonist’s killing spree thanks to what seemed like Nerf guns being doled out to the willing like candy.

On top of all that organised chaos, Dan Bain was indispensable as the titular Hamlet and Kathleen Burns running the gamut of roles ranging from a black widow-esque take on Gertrude to Mario was a real scene-stealer in the best way. Cooper had some strong words for those who turn their noses up at unconventional mediums like games: “Get over yourself”. I’m pleased to report that thumbing it to traditional expectations of what theatre should be and how audiences should experience art has resulted in a one-of-a-kind production that every Aucklander should make time for.