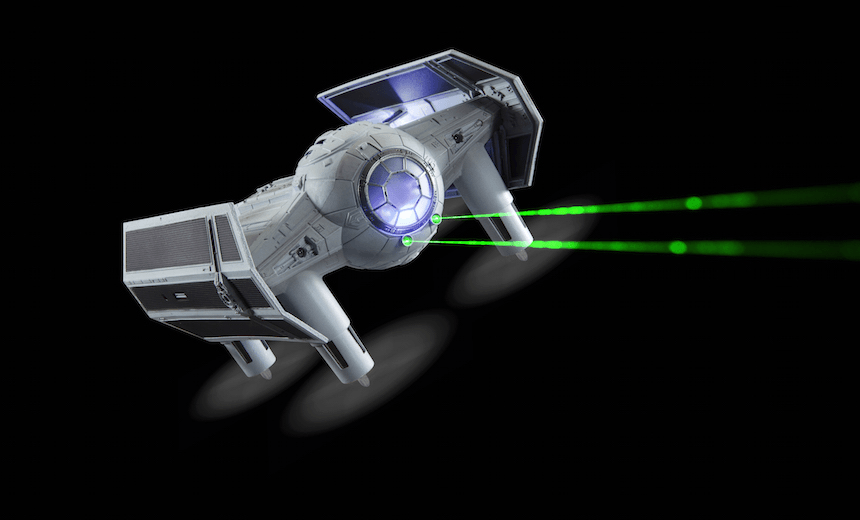 There’s a new drone in town, and it can make the Kessel run in less than 12 parsecs

Until last Thursday I had never been to Sydney, and I had never flown a drone. I have done both of those things now and feel like a fuller human because of it.

The specific drone that I’ve now flown and played around with is Propel’s new Star Wars drone, even more specifically the TIE Advanced High Performance Drone (it’s a drone that looks like the ships piloted by the Empire in the OG Star Wars films). It flies around, it makes noises (with quotes from the films, which is simultaneously great and terrifying), it can fight other drones with infrared lasers and it has a lot of incredibly intricate and complex technology to make it do these three things.

The first thing about the event that strikes me dead is the scale of the venue it is taking place in. These people are taking this drone launch seriously. This is going to be a big deal. They’re not fucking around. These drones are going to be big, one way or another. They have salmon and cream cheese bagels. They have bottled water.

The next thing that strikes me dead are the novelty shirts. A guy has a shirt that says, “She wants the D” but the D is in reference to a droid, which I’m sure we can all agree is very, very, very funny. I myself am wearing a shirt with the visage of my favourite Star Wars actor upon it: Laura Dern. Nobody gets this or brings it up to me. People take photos of “She wants the D” guy. I will not carry this slight to my grave.

Things rapidly turn terrifying when the large screens in the room starts listing a countdown until training begins. A fifteen minute countdown, but a countdown nonetheless. A big door opens. We walk down a terrifying corridor. We are now in the drone launch.

What follows is an hour long speech where I am convinced of many things. I believe that drones are amazing. This drone is going to change the world. I might even be good at piloting the drone. I might get into drones. (The man giving the speech is strangely charismatic and very compelling. I thought I’d gotten to the part in my jaded life where PR and charm doesn’t work on me. Reader, I thought wrong.)

At some point, the man giving the speech catches the drone he’s flying out of the air. And it is the coolest thing I have ever seen. But then I take a pause and think how often he must have flown a drone, maybe even this particular drone, to be able to do it with such grace and confidence. And the silence of that pause is deafening.

After what must have been an hour but felt like a brief drone-and-information-filled dream, I’m taken to a room where I get to play with the app to practise before I actually fly the drone. The app is essentially a flight simulator that you download on your phone and hook up to the controller. I thought this was dumb, but quickly realised that the app is actually kind of fun as a standalone thing, and also very, very necessary if you want to fly your drone and not crash it into things.

Then I was taken to the obstacle course, and while the app had prepared me for the fact that yes, I would be flying a drone, it did not override my general lack of hand-eye coordination. I crashed it a few times, and the pilots helping us were very understanding and nice about it. I felt for them. If I had seen someone fuck up at a basic task as much as they had seen me fuck up at this task, I would be neither understanding nor nice. Maybe drone pilots are the best of humanity. Who can say.

The strangest and most surreal experience was the unboxing room. I’d never heard of unboxing before, and I naively assumed it would be some kind of technical lecture or something where they showed us what was in the box. Not the case! No, unboxing, as I’m sure every millennially-minded human reading this knows, is where you just… open the box. It’s that. The unboxing room was a group of adult humans doing that to a bunch of boxes. It was strange, surreal, and I did not take part because if I’m opening a box, I want to own the thing inside that box. I don’t know what that says about me. Like most of this piece, probably nothing good.

The day closed with the battle arena. Eight drones in a netted arena (protecting us from the drones, and the drones from us) making loud noises. It’s fun. I was bad at it, as I’m sure you can tell from the rest of this article. But it was fun as hell. I can see kids who are into simulated warfare and people who are super into drones having a lot of fun doing it, and even though I’m bad at it I secretly wish I was great at it so I could do cool things with the drone.

Honestly, I was impressed by the drone, even speaking as someone who is not super sure what drones are or what they’re used for. The propellors are on the bottom! They look like the actual Star Wars ships! You can do aerial stunts with them! It can, somewhat terrifyingly, move at over 35 mph!

When I got back to the office and tried it out I realised how important my (very minimal) training was. It took us a few tries to get it off the ground (turns out the way that propellors and physics works mean that they have to be on the right way). I managed to fly it for a bit, and, again, was surprised at how well my training had served me, until I crashed promptly into a wall. Which happened a few times!

I highly, highly recommend using the (free!) training app before you start flying your drone. Not only does it familiarize you with the drone and how it flies, but it’s pretty fun and the courses they put you through are relevant and helpful enough that when you do fly your drone in front of your colleagues for the first time you’ll seem much better at it than you actually are. It also means you save your precious drone from crashing, which you will do lots. (There is a training mode to prevent this and I highly recommend using this because it can get annoying reattaching the propellers because you were dumb and flew it into the wall).

There’s something that’s kind of undeniably cool about flying a Star Wars ship if you’re a fan of the franchise. It’s the same kind of rush that you get when you’re playing a Star Wars video game or reading some of the expanded universe. It’s like you’re taking part in the franchise that is special to you, whether it’s finding out more about that universe or more actively participating in it. This drone gives you that experience. You get to pilot a TIE fighter (or an X-Wing, or a speeder bike!) and you get to be part of the universe, and shoot things at other people who are just as enthusiastic and into this universe as you are.

It’s hard to put a price point on that (although there is a price point, and it’s $219 for a standard drone, and $329 for a collectors edition) and if you (or someone you love who is worth that amount of money) are into Star Wars, into drones, and into defying gravity in a decidedly non-Idina Menzel way, this drone is the thing you should buy when it comes out next week (or maybe for Christmas, but that’s for you and your heart to decide).

Also if you have a passion for crashing small things into walls, in which case you probably need help, this drone might fulfill that passion! Power to you, terrifying hypothetical person.

But honestly, you get to fly a TIE fighter. If you read that sentence and feel butterflies, you’ll pay anything. You know this is for you. Go buy it.

Disclosure: I was flown over to this launch by the people launching it! Which is cool, but is also important to know.