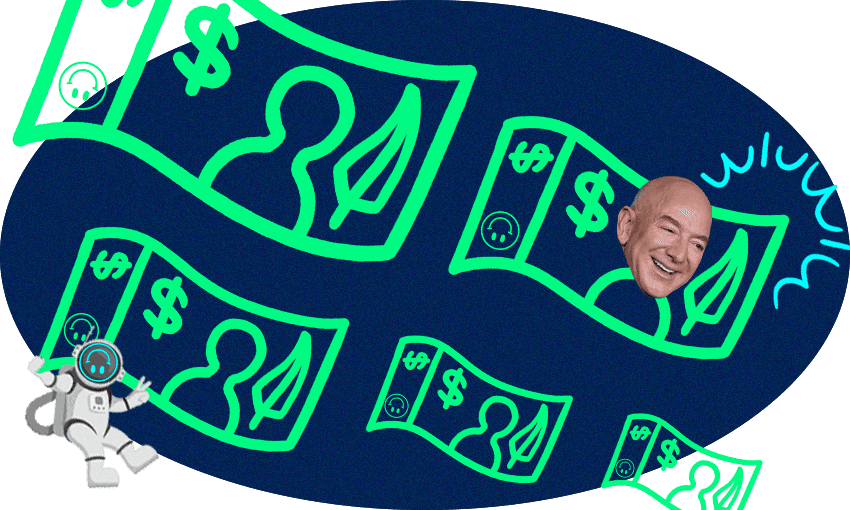 Money can buy you (11 minutes of) happiness

It’s broadly agreed that people spend money to lessen suffering and increase enjoyment. But the answer to the age-old question isn’t so simple – unless, of course, you’re Jeff Bezos.

In the middle of 2021, Amazon founder Jeff Bezos travelled to space with three others in a rocket ship named “New Shepard”. Eleven minutes later, the group returned to Earth, having viewed the “pale blue dot” through the biggest set of windows flown into space. Bezos emerged with a cowboy hat on his head and, when asked afterwards for his reaction, exclaimed: “Oh my god!”

For a man whose fortune is worth an estimated $265 billion, it seems money did buy Bezos happiness – all 11 minutes of it. But is the answer to the age-old question the same for everyone else? A study in the US in 2010 looked at two main strands of what psychologists call “subjective wellbeing” – people’s everyday experiences of joy, fascination or anxiety, for instance, and their thoughts about their life overall. It reported that as Americans earned more money their satisfaction with life increased, but their day-to-day happiness plateaued once their annual income hit US$75,000. A decade on, another study seemingly found the opposite – life satisfaction rose across income levels, but Americans’ daily wellbeing continued to rise even after the $75,000 mark.

“With a lot of psychology findings, one study that questions another doesn’t necessarily mean a complete reversal of what we think is true,” says Amanda Wallis, a research lead at Umbrella Wellbeing, a specialist mental health and wellbeing service provider for workplaces in Aotearoa. But the latest science reinforces the idea that people spend money to lessen suffering and increase enjoyment. There are, however, some fundamentals: the ability to maintain a roof over one’s head, put food on the table, care for whānau and friends and connect socially with others, and the worry about meeting those obligations week in and week out, are “basic psychological needs and human rights, you might argue”, she says.

Having or lacking money can also make it easier or harder for people to feel in control over the direction of their lives – an insight supported by the 2021 money-happiness study results. in August 2020, the latest instalment of a long-running study of young New Zealanders’ health found symptoms of depression and rates of suicide attempts were generally higher among those living in lower-income communities, according to the Youth19 survey. Moreover, a quarter of nearly 8,000 secondary school students reported that depressive symptoms affected their daily lives – a rate that has almost doubled since 2012. The worsening mental health picture couldn’t be explained by one theory, the authors said, but among the many factors at play were young people’s future worries like jobs and housing. At the same time, the average incomes of 15 to 34-year-olds have risen in the last two decades; those aged 30 to 34 are earning as much as $5,000 more than the median for all age groups. By comparison, three in five Australian teenagers in 2020 reported feeling happy with their lives as they earn less while others’ incomes keep rising.

The human tendency to compare one’s position in life to another suggests people are never satisfied with what they have – a theory that psychologists call the “hedonic treadmill”. The emotional spikes experienced from major life events, like winning the lottery, losing a loved one or flying to space, or from chasing pleasure and enduring pain, don’t stick over time. Instead, people’s happiness tends to flatten out after each burst.

For young people, they grow up observing that having a well-paying job and owning a house are markers of success. And as they earn more money, they tend to start making friends with other high-earners, which makes them earn even more. It’s a very western model of happiness, says Umbrella Wellbeing founder Gaynor Parkin, who questions whether it’s useful. “Is it better to shift it around and say ‘how else do you get happiness and meaning and purpose in different ways?’”

The Covid-19 pandemic has highlighted and widened the gap between the rich and everybody else. More than 160 million people have been forced into poverty and the incomes of 99% of people have fallen, according to Oxfam. And the fortunes of the world’s 10 richest men – Bezos among them – have more than doubled to $2.3 trillion. Moreover, rising inflation is making goods and services more expensive and making wages and salaries worth less.

Parkin describes the pandemic’s effect on the wealth gap as “hideous”. Sure, some of the super-rich have asked governments around the world to tax them to help bridge the inequality and fund governments’ responses to Covid. But in the case of Elon Musk, Bezos and Mark Zuckerberg getting unthinkably richer, “that made me feel a bit sick. That’s so not all right,” she says. “In any decent society, we must prioritise everyone having enough” – only then can whānau and individuals look to define happiness, not just for themselves but for their communities.

The pair agree that money is better seen as a means to an end, rather than an end in itself. People who earn more have greater, even better options, while those on lower incomes can still spend what they earn on what they care about. But Wallis acknowledges those situations are over and above the daily struggle that some people have of just trying to make ends meet. “I’m careful not to say ‘be grateful’,” she says. “It’s trite advice for people who are struggling to survive because, in that case, money can be the answer to feeling better.”

So, can money buy happiness? “It can, but it’s likely to be really fleeting,” Parkin says, before wondering whether the founder of Amazon is truly happy. Bezos’s trip to space was “probably pretty exciting, but I bet if we zapped into his world and asked ‘are you happy?’, I don’t know if he’d say he is. He might say ‘I need a bigger jet’.”