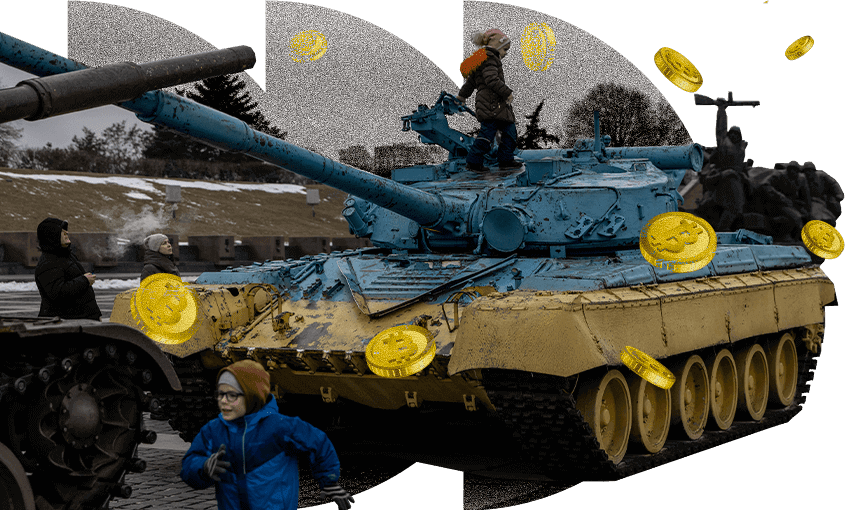 The curious role of crypto in the war against Ukraine

Cryptocurrency is giving Russians the chance to escape Putin’s sinking ship of an economy, but it’s also being used by savvy Ukrainians to finance the grassroots defence of their country. Nick Blakiston explains.

If, like me, you’ve been endlessly doom-scrolling coverage of the war in Ukraine, you might have seen increasing chatter about the use of cryptocurrencies in this conflict. Cryptocurrency can be hard to wrap your head around even without Covid, inflation and the threat of a nuclear winter hanging over our heads, but its current role in Russia and Ukraine is an opportunity to see how the innovative ideas behind crypto mesh with the archaic behaviour of war.

In Russia the entire finance system is failing. Russian citizens can’t transfer money overseas, some are driving to borders with bags of cash, and the head of the Russian central bank is wearing black at press conferences to mourn the death of her economy. If you’re a wealthy Russian you want your rubles out of the banks, and somewhere where you can shift it quietly, quickly and for cheap. Crypto begins to sound like a pretty good option, right?

Transaction speed, cost, accessibility, security, privacy. Everything we read about crypto mentions these benefits. But how many of them actually stack up when you have oligarchs with billions of rubles in a failing bank, looking to get them out quick smart? Well, cryptocurrencies aren’t the bastion of anonymity they’re quite often made out to be. Since the blockchain is public, transaction sizes needed to transfer an oligarch’s billions to a crypto account would be red-flagged by money-laundering programmes instantly. Not ideal if you’re trying to hide assets from the pesky west, whose sanction hammer is coming down everywhere you look.

Additionally, although cryptocurrency is big, with a total market cap of $1.7 trillion, it isn’t nearly as much as what the Russian banking system is dealing with. The scale needed to move such large amounts of money would totally overwhelm the crypto system, ie the liquidity would dry up real fast.

Ordinary Russian citizens, the ones who don’t have super yachts full of rubles ready to be snapped up by the US Department of Justice, however, still can use bitcoin to escape Putin’s sinking ship of an economy. As yet, western sanctions haven’t stopped Russians from using crypto exchanges, with the Coinbase CEO, Brian Armstrong, tweeting “we are not preemptively banning all Russians from using Coinbase. We believe everyone deserves access to basic financial services unless the law says otherwise”. One of the pillars that cryptocurrency is built on is the fact it isn’t really impacted by interference from governments, so I’m sure they’re going to take this stance as long as possible.

The Ukrainian use of crypto is far more interesting. Something you might not have known about Ukraine is that they’re fourth in the world for cryptocurrency adoption. In fact, the government of Ukraine has spent the past few years building its own crypto currency industry, legalising bitcoin last November. It’s safe to say Ukraine knows how to hodl. This head start has given Ukraine the advantage when it comes to using crypto in the time of war.

Even before the Russian invasion had started, you could donate bitcoin to the Ukrainian military, and as of March 5, over NZ$22 million had already been spent on military gear (they won’t say exactly what for obvious reasons), out of a total $73 million donated. It’s not just bitcoin flowing in either, with the government of Ukraine now the proud owner of a rare CryptoPunk, an NFT worth around NZ$300,000. UkraineDAO (a decentralised autonomous organisation, basically a buying syndicate on the blockchain – led by Pussy Riot!) auctioned off a Ukraine flag NFT for 2173 ETH (Ethereum), which is nearly NZ$8 million. The proceeds from UkraineDAO will be heading to Come Back Alive, a Ukrainian organisation that helps out the military with training and defensive resources.

If cryptocurrencies are to be taken seriously as a genuine alternative to traditional currencies, then they can’t only exist in the ideal world of Twitter threads, Discord chatrooms and NFT TikToks. When the shit hits the proverbial, how does the system stand up?

We see two very different use cases for cryptocurrencies here: one that is trying to save Russians from the financial consequences caused by this generation’s most fragile ego, and one that is using crypto to finance a grassroots defence against tyranny. In either case, it’s a crazy situation we’ve ended up in – where a missile bought with the sale of a jpeg of a man smoking a dart could conceivably be used to blow a Russian helicopter out of the sky. Progress, or just another consequence of the world’s first extremely online war?