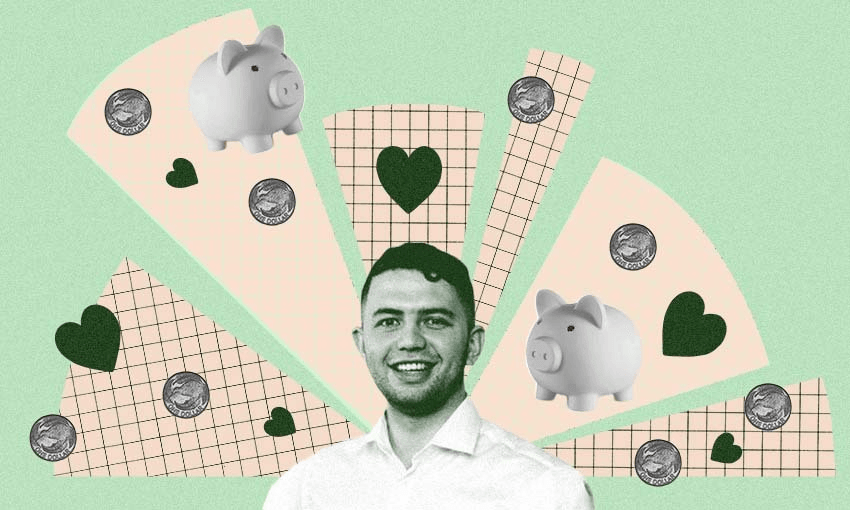 The homegrown investment platform is welcoming to the board table its inaugural ‘future director’, Tahana Tippett-Tapsell, who says he’s itching to help Māori and Pasifika create wealth for generations to come.

Growing up in east Auckland, surrounded by whānau that “didn’t have much, at all”, Tahana Tippett-Tapsell never knew there were investing opportunities beyond KiwiSaver. But as an investment manager for the Māori investment team at New Zealand Trade and Enterprise, hailing from Tainui, Ngāti Paoa, Te Arawa and Ngāti Raukawa, the 27-year-old thinks homegrown investment platform Sharesies is leading the way on making sharemarkets more accessible to everyday New Zealanders. It’s a mission that sits close to him as he gears up for his first board meeting next week as its inaugural “future director”.

“Sharesies has been one of the fastest-growing New Zealand companies,” he says. “I’m very proud to be a part of that and help it take its next steps into the future.”

The year-long opportunity, offered by professional directors’ body the Institute of Directors (IOD), was something he couldn’t pass up. Tippett-Tapsell will attend and participate in all board meetings (without the voting rights of a fully-fledged member) and learn from an experienced mentor, while Sharesies’ board will benefit from being exposed to a perspective they might otherwise have lacked.

And his viewpoint is critical – investing is often not a priority for New Zealanders dealing with ballooning living costs including the price of food, which rose almost 7% in the year to February 2022. Meanwhile Māori and Pasifika households struggle the most to meet their everyday needs, hardly surprising when their median disposable incomes are the lowest among the country’s ethnic groups at $38,000 and $37,500 respectively for the year to June 2021. By comparison, median Pākehā disposable income is $46,000, and $44,400 for Asian households.

Tippett-Tapsell has first-hand knowledge of those inequities, alongside a perspective rooted in te ao Māori and a background in finance. He attended Te Rumaki Reo o Ngā Puna o Waiōrea, a te reo immersion kura on the same grounds as Western Springs College in Auckland, and for the last seven years has worked as a commercial banker for ASB Bank and more recently at NZTE helping Māori businesses and investors. That made him exactly the kind of person Sharesies was looking for, says co-chief executive Brooke Roberts.

In a bid to help close the wealth gap, Sharesies is starting to draw on the cultural and financial expertise of tangata whenua. In January, it announced Ngāi Tahu Holdings, the investment arm of the South Island iwi, had invested $3 million with a view to creating intergenerational prosperity for whānau members. Sharesies has added to its portfolio Tahito Te Tai o Rehua, considered one of the world’s first indigenous investment funds. The fund uses mātauranga Māori to screen and select NZX and ASX-listed companies against rigorous ethical and sustainable criteria.

Removing barriers to entry and unnecessary financial jargon is crucial to opening access to sharemarkets, says Roberts, as is ensuring communities aren’t excluded from participating in a sector that is still largely made up of men who are Pākehā. “We want to create a space where investing no longer is associated with being wealthy,” she says.

Raising awareness is part of the solution, says Tippett-Tapsell. When he speaks about financial literacy with low-income and isolated Māori and Pasifika communities he tells them there are opportunities out there that don’t require massive amounts of upfront investment. “Even if it’s $5 or $10, at least you’re making a start,” he says. “But hey, there might be people out there who absolutely can’t spare $5 – and I respect that.”

Investing is not enough though, and improving the financial literacy of whānau is key to helping them ride the roller-coaster of wealth creation, he says. Māori generate wealth not for wealth’s sake, but to care for their whānau and to spend time on things that really matter, like mokopuna. In fact, “mokopuna decisions” is how the future director explains intergenerational wealth – for Māori, the financial decisions they make today must benefit not only their grandchildren but their grandchildren’s mokopuna.

Good governance is critical to a company succeeding, failing or staying stagnant. From startups to high-growth businesses, management teams are often busy working in the business, so rely on a group of advisers – most often a board of directors – for help working on the business. Directors are the ones tasked with thinking about the “big picture” questions, like what is the company’s vision, what are its long-term aspirations and what may jeopardise or improve its chances of success. Besides ensuring the business complies with its legal obligations and can pay its debts, directors hold leadership teams to account on performance, because boards are accountable to shareholders for improving or harming the value of their stakes.

Mather says Māori directors bring an innate understanding of the relational nature of their task. After all, effective, competent governance depends on whanaungatanga, kotahitanga and manaakitanga – Māori concepts commonly found on the marae and in Māori communities. Boards are no different, he says: collaboration requires diverse views, vigorous debate among individuals with decisions made collectively, and mutual respect between members.

Governance is often perceived as a job that executives start doing once they’ve finished leading organisations or in the twilight of their careers. But Mather, a former chief executive of Te Wānanga o Aotearoa and Māori Television, thinks otherwise – it’s a viable career for anyone, including Māori. Tippett-Tapsell has caught the governance bug early – he has his sights set on more directorships in the future – but for now, he’s got enough on his plate.