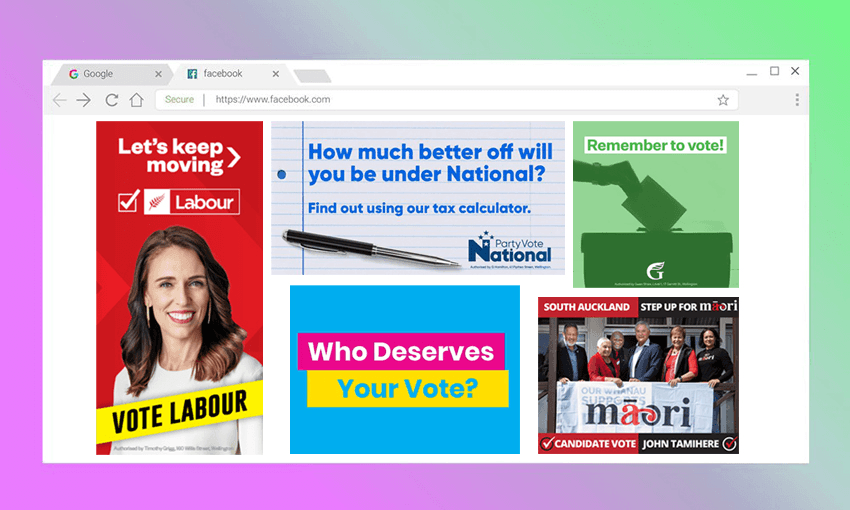 NZ’s election, online: What did each party spend – and how effective was it?

Which parties spent the most on Facebook and Google, and was it really all worth it in the end?

The election is over and the results are in: Labour swept the polls, National lost big, and the Greens and Act are set to return to parliament with an even bigger cohort of MPs than they did in 2017. And while the effect of political advertising remains debatable, parties both big and small spent thousands online, so who spent what, where and why? We break down what our parties and candidates spent on Facebook (including Instagram) and Google (including YouTube) one month from election day 2020.

Note: Data has been taken from September 20 – October 19. Figures are rounded to the nearest $100 and only candidates who spent $2,000 or more on Facebook have been included.

By far the biggest spenders on Facebook, National forked out just over $261,000 for advertising with the vast majority of that spend targeted at those in the Auckland region ($97,000).

But despite those large sums, National ran significantly fewer ads than its competitors with just 66 ads in its Facebook library compared to, for example, Labour’s 896. It suggests the party opted for a broader, less granular approach, preferring to pour its resources into just a few options rather than hundreds of slightly different ones.

When it comes to the ads themselves, the majority focused on emphasising on the party’s fiscal credentials and the “leadership, experience and vision needed to get our economy back on track”. A number of ads also highlighted how National would enable New Zealanders to “keep more of what they earn” before taking a more direct approach by targeting the wealth tax (“disastrous for retirees”) in the election’s final week.

Big sums were also spent by individual candidates with 11 National contenders spending more than $2,000 in the election’s final month. Leader Judith Collins topped the list with $9,900 followed by $5,500 for Rima Nakhle. Nakhle, who stood in the newly created electorate of Takanini, ran a huge campaign on Facebook with over 200 different ads, plus a few more from the party itself during the campaign’s final stretch. Unfortunately, despite being tipped as being one of the most hotly contested seats this year, Nakhle lost in Takanini by a significant margin – just over 4,500 more votes went to Labour’s Dr Neru Leavasa instead.

Meanwhile, National spent a more modest $108,400 on a total of 22 ads on Google. Spending peaked in the week advanced voting started (October 4) following a steady rise in the weeks prior, after which it dropped dramatically as election day drew closer.

Labour, on the other hand, focused most of its financial resources advertising on Google with just over $242,800 spent on the company’s platforms. It ran over 300 ads, including videos and banners featuring Jacinda Ardern and paid links on Google search to Labour policies . Unlike National, whose spending peaked by the time advance voting commenced, Labour took the opposite approach and ratcheted up its expenditure to peak in the election’s final week.

On Facebook, Labour spent $154,000 on 896 ads over the course of the month. Several ads feature the same content but with slightly different messaging (ie “Still not sure who to vote for?” vs. “If you’re still deciding who to vote for…”) while others relay the same message (“New Zealand needs a strong, stable government…”) but with fresh imagery and designs, indicative of an A/B-tested, data-led approach to maximise reach and value for money.

As the key figure in Labour’s sweeping electoral victory, it’s no surprise the candidate with the largest spend was Ardern herself. Her campaign spent $38,000 on 46 ads in the final month with every single one featuring Ardern speaking straight into the camera, either in a more formal or informal capacity. Her most successful video (by impressions) somehow managed to combine both.

Yep, this election truly was all about Ardern

The Greens opted for a more even split in resources with $112,000 going to Google and $115,000 going to Facebook. On Google, it took a similar approach to Labour by steadily increasing its spending as election day drew closer. It ran a little over 100 ads in total, including paid links to Green Party policies on Google search, animated banners featuring its “Think Ahead” slogan, and videos featuring both candidates and supporters. The final week of campaigning saw ads targeted at overseas voters, particularly those in the UK and Australia.

Over on Facebook, the Greens ran 417 ads with its budget which focused mainly on courting the crucial party vote (followed by reminding people to actually do the voting).

Chlöe Swarbrick, who campaigned hard to win the hotly contested seat in Auckland Central, was the sole Green candidate to spend money advertising on the platform with a sizeable budget of $7,000 which, in the end, seems to have paid off (party co-leader Marama Davidson on the other hand, who unsuccessfully stood in Tāmaki Makaurau, spent less than $100).

Act received a similar result to the Greens on election night but spent significantly less on online advertising overall. On Facebook, it spent just $64,000 with leader David Seymour spending an additional $9,800.

But despite the relatively modest amount, Act ran more ads than any other political party or cause out there with 915 ads to its name. Some were generic appeals for votes while others were more humorous and emotive, including ads that attacked its rivals, empathised with voters, and platformed its views on everything from free speech to gun laws in an easily consumable way.

On Google, Act spent around $13,000 in its final month of campaigning. Similar to National, its spending peaked by the time advanced voting started and fell away as the weeks went on.

On the face of it, the Māori Party spent a modest amount with just $12,800 invested into Google (which peaked in late September) and $13,300 invested into Facebook (for a total of 232 ads). But with a strong focus on getting votes for its Māori electorate candidates, looking at the $42,400 spent by co-leader John Tamihere’s campaign to win Tāmaki Makaurau paints a much fuller picture of the party this election.

From the $42,400 that was spent, Facebook shows that $24,200 was paid by Niko Mikaele Toluono who’s listed as a board member of Family Success Matters which provides free family wellbeing programmes. The remaining $18,200 was paid by Joseph Peter Lose who, in 2017, worked as the communications manager for Te Whanau O Waiparera Trust, where Tamihere serves as chief executive, and on Tamihere’s Auckland mayoralty bid last year.

Other Māori Party candidates listed as spending on Facebook include Rawiri Waititi who narrowly won Waiariki against Labour’s incumbent Tamati Coffey. In total, $5,700 was spent on Waititi’s online campaign, which mainly targeted those in the Bay of Plenty region, with $1,500 paid for by the Māori Party, $4,100 paid for by Christina Ross Wikitoria Tamihere (who’s understood to be Tamihere’s daughter and Waititi’s wife), and the remainder paid for without a disclaimer.

Meanwhile, Māori Party co-leader Debbie Ngarewa-Packer spent a little under $2,900 for Facebook ads during her campaign for Te Tai Hauāuru. Her ads primarily targeted those in the Manawatu-Wanganui, Wellington, Auckland, Waikato, and Taranaki regions.

Before getting zapped by the Facebook overlords for repeatedly peddling Covid-19 misinformation, Advance NZ/New Zealand Public Party spent a significant sum on advertising for a party that ultimately received less than 0.9% of the vote.

The group paid around $54,000 for 15 ads, including one that was taken down for claiming that Labour “rushed through a law change under urgency to enable them to force our citizens to be vaccinated”. Other ads included an 18-minute video of candidate Tiamara Williams lambasting Stuff for its investigation into party leader Billy Te Kahika Jnr, a song from Te Kahika where he sings “communists to the left, fascists to the right” to the tune of ‘Stuck in the Middle With You’, and a clip of Te Kahika shooting a gun.

The Opportunities Party, which received 1.4% of the vote, spent $27,600 on Facebook advertising along with $3,200 from Mt Albert candidate Cameron Lord and $2,000 for Ōhāriu candidate Jessica Hammond. Meanwhile, former coalition partner New Zealand First spent $20,500. None of New Zealand First’s candidates spent more than $2,000 advertising on the platform except for ex-MP Shane Jones (whose Facebook page has since been deleted).

Money can’t buy you everything, and it certainly can’t buy you votes (at least not in New Zealand). If election results were purely correlated with how much parties and candidates spent on advertising online, then the gap between Labour and National would’ve been much smaller, the Greens would’ve outperformed Act, John Tamihere would’ve won Tāmaki Makaurau, and Advance NZ would’ve got more than a measly 0.9% of the party vote.

The thing with online advertising is that even with limited funds, a sophisticated, well-thought-out campaign that makes the most of the tools on hand (ie microtargeting, A/B testing) has the potential to work efficiently and effectively. Act, for example, made the most of its comparably modest budget with more than 900 different variations of graphics, videos and links on Facebook. Meanwhile, National, which spent more than four times the amount Act did on the platform, opted for a broader approach which generally helps to build awareness but not really a whole lot else.

In most contexts, doing “more with less” isn’t actually a viable option. But when it comes to Facebook and Google advertising, it’s one of the smartest thing parties and candidates can do. Yes, more money is always good, but a savvy social media strategy? Even better.