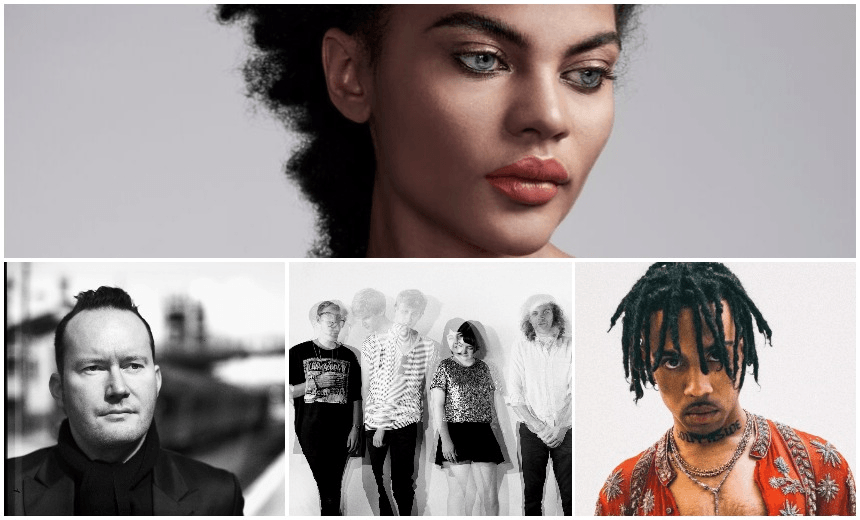 Best Songs Ever: Dancing to the end of the non-digital world and ASMR-pop

Dancing to the end of the non-digital world

Estère, the Wellington-based producer/singer/artist, is back with a twisted electro-funk missive against our collective obsession with technology. ‘Pro Bono Techno Zone’ is an expansion of the sound she built, with her sampler ‘Lola’, on her 2014 self-titled EP. Over a steady, unfussy beat, an IRL guitar, clipped blasts of horns and sampled helium voices, Estère decries a world where kids don’t go outside, where we see faces as swipeable images, where digital distractions have a monopoly on what’s left of our attention-spans. If that all sounds self-serious and a bit of a bummer, I can assure you it’s not. If society is going to hell, staring into its phone as it walks off the cliff, ‘Pro Bono Techno Zone’ at least sounds like something to dance to, even if it’s on the way down. / Henry Oliver

Christchurch’s best dream-pop band return from covering (What’s The Story) Morning Glory? in its entirety with the first single from their recently-announced second album. ‘December’ is so satisfyingly serene it could just about count as ASMR (is ‘ASMR-pop’ a genre yet?) – especially when the layered backing vocals blow in on the chorus. But don’t confuse serenity for lack of detail, because there’s a lot packed into the song’s four minutes. Horn lines, handclaps, a classic Cure bassline, a keyboard part that sounds a bit like a muted version of Lightning Seeds ‘Pure’… all thoughtfully utilised and always in service to Christie Simpson’s vocals. Add it to whatever your chill out playlist is called immediately. / Calum Henderson

Finally, a metal band for the 2% (of the population with red hair)

On their second album, Auckland metal band Bloodnut double down on their schtick, one that if you haven’t heard about makes for quite the story. The self-proclaimed “band of gingers” explore what they call “the darker side of what it means to be red of hair” throughout their records, which boils down to “songs that cover religious persecution, the negative myths and history surrounding the 2%.” They’re also promising to donate 10% of their album sales to Melanoma New Zealand since “skin cancer is no joke for gingers.”

This new one’s called St Ranga – yes, that’s a Metallica reference – and it follows on from Blues From The Red Sons that took its name from a 1992 Kyuss record. (Check out their cover art for it if you’re looking to get a kick out of today.) Just like Kyuss, the band channel a certain kind of sludgy stoner rock that is worthy of attention. But listen closely and behind their tongue-in-cheek veneer you’ll find an act that could easily segue this thing into something that people will be willing to actually take seriously. Let’s hope they do: it’s not like New Zealand needs its own Tenacious D anyway. / Hussein Moses

Even if you’re not into Shakespeare…

I’ve been in love with the live version of this for about a year now. First performed by Esther Stephens at the Pop Up Globe for their Play On event (which is coming back for the Cabaret Festival this year), ‘Love’ is an excerpt from William Shakespeare’s ‘Love’s Labours Lost’. McLaney’s Play On album came out literally today, and the studio version is a smaller, more intimate version of this performance. It feels like Stephens whispering a little love poem in her ear, whereas the live version of this is a big, huge, messy declaration of love.

It’s not for everyone; it’s a 6:20 performance of Shakespeare that hews closer to Loreena McKennitt than say, The Chainsmokers, but McLaney’s production is lush but delicate, and Stephens’ smaller, intimate performance makes it sound like you’re sitting across from her at a bar while she tells you hard truths about love. I’m not into Shakespeare, but this is the bard at his most relatable, warm and human. / Sam Brooks

The collaborator strikes out on his own…

Only a certain type of rap artist can pull off a Kid Cudi homage and then immediately follow it up with a song featuring power-pop geeks Weezer. But on his debut album The Autobiography, Vic Mensa – the Chicago emcee who’s best known for collabing with Kanye West on songs like ‘Wolves’ and ‘U Mad’ – makes it clear that he’s going to do things his own way. For the most part, the record is an exploration of addiction, depression, loss and struggle, with Mensa’s knack for radical honesty helping to drive those topics home. Then there’s ‘Didn’t I (Say I Didn’t)’, the Darondo-sampling album intro that’s works as a simple reminder that no matter how dark it gets, the sun keeps rising. “Didn’t I tell you we was gon’ make it to the top,” he muses throughout. For Mensa, it’s not so much a question as it is a proclamation. / HM

Sons of Zion feat. Aaradhna – ‘Is That Enough’

“BLOWING UP THE CHARTS”.

“Tipped to be one of the biggest hits in New Zealand this year”.

Despite their record label’s best efforts to tell us otherwise – those quotes above come straight from the press release about the song – the latest from Sons of Zion doesn’t quite live up to the hype. Reggae might be at the heart of what they do, but on ‘Is That Enough’, the band take a leaf out of newcomer Teeks’ book and land on a throwback soul sound that puts them firmly in the adult contemporary, buy-it-for-Mother’s-Day kind of category.  It won’t break any new ground, which is a shame. Never mind, I only clicked on it for Aaradhna. / HM