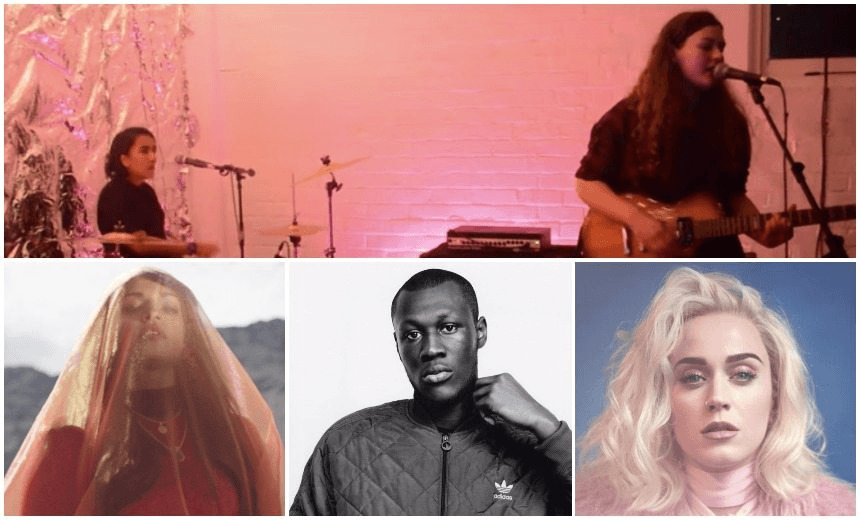 Contemporary indie’s reclamation of late 90s Midwestern emo has locally been inflected by both pop-punk (Carb On Carb) and twee (prizegiving circa ‘Soft’); the first single from Palmerston North duo fruit juice parade slows things down with a plaintive, yearning melodicism – check the pacing on the delivery of opening lines “I don’t claim to know much about how the human psyche works / But I show no fear in saying you’re getting on my nerves”, or the wordless refrain in place of a chorus. While there’s kinship to Melbourne’s Camp Cope, it’s more sonically divergent local precursors that ‘Whaling’ conjures up for me – the line “I’m gonna go live in the library with dead poets to keep me warm” and chorus-too-intensely-felt-for-words brings to mind Frase+Bri’s ‘8 Hr Crush’ (“Never forget all the novels you’ve read / you’re not just a girl whose heroes are dead”), or even the jangly social anxiety of Sneaky Feelings circa ‘Throwing Stones’ and ‘Not To Take Sides’. – Stevie Kaye

M.I.A.’s new song ‘P.O.W.A.’ is causing waves already, and for good reason: it’s M.I.A. at her traditional best, asserting her unique Sri Lankan-British identity (“The real spice girl”) and imbuing a bouncy, hip-hop-adjacent beat – courtesy of Kid Kamillion and M.I.A herself – with overtly political lyrics, à la ‘Bad Girls’. Naturally the pundits are up in arms about what is being characterised as a Rihanna/Madonna/Mariah/Ariana diss (but isn’t really, as she clarified in a now-deleted tweet), but it’s about the least interesting element of the song, which is the most impactful track M.I.A. has released in years. – Madeleine Holden

Stormzy – ‘Big For Your Boots’

Grime MC Stormzy pushes his rapidfire flow until it dissolves into queeny, hiccuping hysteria – “You’re getting way too big for your boots / You’re never too big for the boot” he squeals in a prime example of grime’s affinity for deliciously nursery rhyme-y hooks, while Sir Spyro’s quaking bass is garnished with ominious male choral stabs and classic rave’n’2-step helium stutters. I can’t listen to the verses without succumbing to an ear-to-ear grin: “Try tell me I’m way too big to rebel? / Nah, man, you’re never too big to rebel / I was in the O2 singing my lungs out / Rudeboy, you’re never too big for Adele” to the bit about leaving his trophies at his mum’s to a “Qatar”/”guitar” rhyme. It’s hard to find fault with this first single upcoming Gang Signs And Prayers – already at number 8 in the UK charts, and hopefully climbing. – Stevie Kaye

Katy Perry – ‘Chained to the Rhythm’

The release of Teenage Dream coincided with my second year of university and its golden run (five number-one singles, only the second album to do so; more than 3m copies sold in the US alone) extended long into my third. My student heyday was soundtracked by back-to-back Katy Perry hits, and it pains me to see how far she’s fallen with ‘Chained to the Rhythm’. This is immensely pedestrian disco-lite, with half-baked lyrics about a tone deaf, checked-out populace, “stumbling around like a wasted zom-bie” (however you imagine Perry might logically phrase “zombie” – it’s not that) and a guest verse from Skip Marley that can only be described as tokenistic. To mark her return to the charts after a four-year hiatus, KP staged a global discoball hunt in which it sounds like few people took part. That’s a failure of marketing, but I’ve got to say, had I been the kind of Katy Perry fan to hang on her every drop, I can’t imagine having been anything but disappointed when I heard it. If it is true that we are “so comfortable we’re living in a bubble” (#fakenews!), this won’t be the song to wake us up. – Elle Hunt

Jens Lekman is probably the sweetest guy in music. Singing about the heartbreaking moments of modern life is his trademark, and here we have a typically tearjerking lyric about Jens finding the courage to tell a close friend that he prayed for him in a time of anxiety. The bubbly disco track couldn’t be a further cry from its subject matter, but this is another of Jens’ hallmarks. The bass drum and bass guitar absolutely slam, and LouLou Lamotte’s staunchly optimistic backing vocals might trick you into thinking that the joy in this song isn’t bittersweet. Most heartening of all is Jens’ refusal to be cynical about the act of praying – stripping it from an overtly religious context he reminds us what a prayer really is – our purest thought, and an acknowledgment of a higher power, however you might define it. File this song under the same category as Illinois-era Sufjan Stevens. Along with the previously-released single ‘What’s That Perfume that You Wear?’ this suggests that the new Jens LP may top the 2007 masterpiece Night Falls Over Kortedala. – Mitchell Houbrooke

Has any pop star from the turn of the millennium been as badly treated by the record industry as Michelle Branch?  In short order she racked up two platinum solo albums, sang lead on smash single ‘The Game of Love’ (written by the team behind New Radicals’ ‘You Get What you Give’, and perhaps the only truly great thing about that weird period of  time where Carlos Santana was a pop star), before switching to country via the excellent duo The Wreckers, where she also went gold. That Wreckers album was eleven years ago, so to casual listeners Branch fell off the face of the earth soon after, but in reality she was being shunted from pillar to post (or perhaps more accurately from Warners to Sony) while two full solo records never saw the light of day other than in dribs and drabs on EPs. Cut to 2017 and Branch reappears with a single from her upcoming album, both of which share the title ‘Hopeless Romantic’.  This unveils a new version of the singer-songwriter, working with romantic and musical partner Patrick Carney of the Black Keys, Branch unveils a tremendous slice of moody and narcotic indie pop in which Branch sounds older in the best possible way, and seems almost wearily resigned to the romantic doom surveyed in the track. It grooves like nothing Branch has ever done, and sets expectations high for the album proper. – Pete Douglas

Is there any better feeling than stumbling across a great song, only to learn the artist is basically undiscovered and 100% on the precipice of global domination? That’s how I feel about Noah Kahan. ‘Young Blood’ is an earthy folk song that translates as a Passenger x Mumford and Sons collab you didn’t know you needed. The uplifting lyrics are pretty cringey, but there’s something about the raw strumming and crashing percussion that just makes it okay. Non-abrasive and mum-friendly, if Kahan churns out a few more singles of a similar vein he’ll be on a 2012 Ed Sheeran touring circuit in 18 months, easy. – Kate Robinson

‘Panda’ was a megahit for the then 18 year-old Brooklynite, but his follow-ups haven’t been as well received. I for one thought that ‘Timmy Turner’ was dope, even though parts were a bit corny. ‘Outlet’ will probably get the same reception, but I would like to point out that Desiigner is probably the most abrasive and experimental artist of the whole trap subgenre, and for that he deserves some attention. ‘Outlet’ quickly unfolds into a messy, busy orchestral production, with some very heraldic brass. What many Desiigner songs do well is launch so many rhythms at you at once that it becomes difficult to find your place in the bars – only the lone snare drum arriving on the sparse backbeats is there to guide you. This effect becomes more pronounced in the song’s second half, where the instrumental drops out entirely, and Desiigner unleashes a savage verse in heavily syncopated triplet meter. Finally a new, heavenly instrumental comes in for the outro. Hip-hop desperately needs its popular artists to explore the boundaries. Being weird is easy. Being experimental for its own sake is easy. Pushing an established, formulaic genre into new territory – that’s art. – MH