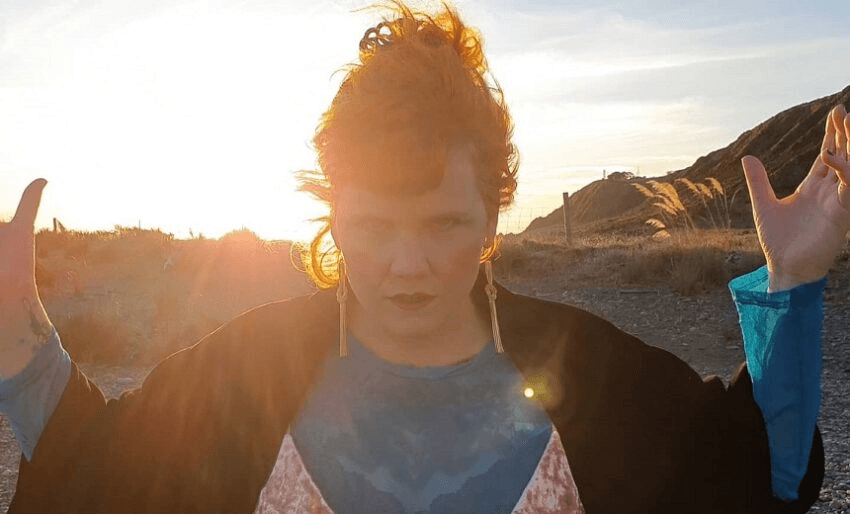 A brutal kind of therapy: Wellington band Giantess on their new break-up record

What is it like to grow an album over two years and then labour it during a lockdown? Giantess frontwoman Kiki Van Newtown tells Emily Writes about making music in a pandemic.

If you’re a mega-fan of Wellington’s witch-stoner-rock icons Hex, like I am, you’ll have been eagerly awaiting the arrival of the debut Giantess album.

Giantess are the band that about two years ago emerged from Hex, stronger than ever. Kiki Van Newtown and Jason Erskine joined Lauren Ellis, on percussion, to create something entirely new that still borrows from all that made Hex so good.

I was gutted to see the end of Hex, after two great records and tours across Australia, the US and New Zealand. But I knew that something better was coming. Kiki Van Newtown is a powerhouse and always has been. I was excited to interview her about Big Woman, the debut Giantess album.

It must feel good to have Big Woman out.

I feel free! I’m really excited. It’s been in the works for about two years. I think in about October last year I was basically like I can’t do this any more. With the last track we recorded vocals for, I was so traumatised from the whole process that I was lying on the floor of the band room with just a hand-held microphone trying to get the words out. It’s a really emotional album and the whole process has been a brutal kind of therapy.

Is it easier or harder to put a break-up album out into the world when the world is in lockdown?

It actually feels really good to be putting something big and radiant out into the world at this time. We were meant to be in Australia right now. We had started to book shows and then in February I could see what was coming and I realised that the tour wasn’t going to happen. So it feels weird to be putting out an album with the music scene in the state that it’s currently in, but I think the way we do live music will be substantially changed for a long time now and that’s sort of exciting.

Other than the obvious, how much do you think the music scene has changed?

Well, the physicality of live music is gone for now. It’s going to be a while before we can have 200 people squashed into a room sweating all over each other. But the whole lockdown has brought out this incredible creativity in the music scene. There are all of these live performances online by musicians where they’re also telling stories and painting and reading poetry, it’s so cool. I hope that flows over into live performance and that live performance begins to include the whole creative process rather than just playing songs as loud as you can. Though I also love doing that.

That’s pretty similar to how Big Woman is, right? Because it’s a record and a book?

Over the years when I was writing this album I was also writing lots of short stories and it just came together like one cohesive piece of, like, creative vomit.

And how did Mica Still’s art contribution fit into this process?

Mica had previously done an exhibition of these really powerful naked women mixed in with rainbows and animals. We basically asked her to do something like that. She made me do all these sensual poses on her fold-out bed and she took pictures and then came up with the cover. It’s like a fictionalised version of me.

Was recording and producing the album at home with two children under eight really hard? It seems impossible to me.

The process of doing any sort of work, including creative work, is that you don’t stop being a parent when you’re doing it. The whole production of the album was timetabled around the kids. That’s sort of why it took so long. I’m really lucky that my mum lives with me and is able to entertain the kids if I have something I need to do. But it’s definitely a struggle. Most of the mums I know who are musicians, writers or artists – they just know how to hustle because there’s no other option.

Is releasing an album during lockdown a bit shit?

I’m sad that we can’t play live. That’s the biggest joy of being a musician but I’m actually quite an introvert so I’m really looking forward to interacting with people in different ways. We’re going to do mini concerts on Skype.

We’ve performed some of the songs for a while and it does feel huge. It feels really huge. Emotionally, sonically, and now putting the entire album out, it feels like I’ve ripped off all of my skin and taken a photo and put it on the internet. I feel vulnerable but I also feel powerful.

Listening to the album, it feels really hopeful. Was that your intention?

When I was writing it and recording it, I was thinking about how I felt, which was this incredible expansive sense of possibility. It just kind of came out and I thought, “this is really big”.

How do you think Covid-19 will change the New Zealand music scene?

I think it’s shown the need for more government support for the arts sector. We need funding for venues, and it would also be a good time for the government to reinstate the artists’ benefit so artists can actually keep creating art.

Giantess’s Big Woman is out now. Check out a full stream of the record here.