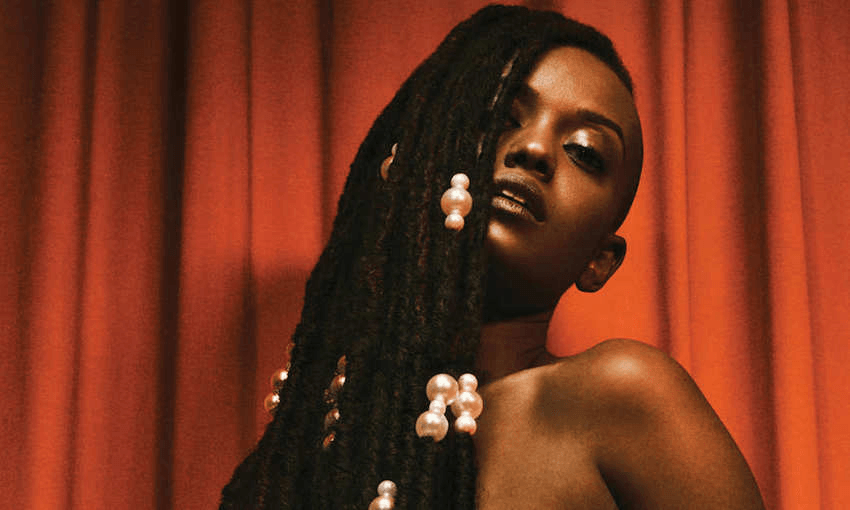 Madeleine Holden talks to Kelela ahead of her Auckland show this week.

Kelela’s musical chops are not up for question. She has been quietly producing some of the most interesting R&B on the world stage since her Cut 4 Me mixtape dropped in 2013, and 2017 was a banner year for the Washington DC native, with her debut album Take Me Apart gracing every end of year list worth its salt. The album was greeted with widespread critical acclaim, billed as everything from “technically stunning and emotionally realised” to “deeply sexy and liberating”.

But Kelela is worth listening to for reasons that extend beyond her music. The Fader’s profile revealed her patience, sharp intellect and strong social conscience to an extent that the general public hadn’t seen before, and with every passing interview, she expounds on her politics and values more openly and persuasively.

Ahead of her show in Auckland this Friday, The Spinoff managed to get Kelela on the phone. We wanted to find out as much as we could about the interiority of such a fascinating artist: all the things that bring her joy, how she likes spending her time, what she’s interested in — in short, all the things that make her tick. This is what she told us:

On the topics she’d be researching for her PhD if she wasn’t doing music:

I would think of a new dissertation every week! I’ve come up with different research questions, most of them situated in sociology. One of them was research on the relationship between pain and comedy, especially through Black American comics. The phenomenon of being able to make the world laugh while experiencing very deep-rooted pain.

Another one was the relationship between African Americans and African immigrants in the United States. I was at the School of International Service at American University in Washington DC, and I wanted to do my dissertation on the lack of self-implicative analysis at that school. When it comes to development, or international politics and business, there’s a way that people can operate extractively. They can go into a place and think they’re saving somebody, and that they’re not implicated in the problem themselves. They can just point to the issues and tell someone else to fix them.

I always saw that as very different to how sociology and anthropology work. You can’t research or examine any phenomenon in sociology without first calling out yourself and pointing out the ways that you contribute to the problem you’re pointing to.

On the self-care rituals that make her feel good:

Saunas: dry sauna makes me feel really good. A lot of people think that a steam room and a sauna are kind of the same, but dry heat is something that feels really good to me. You know when it’s really hot outside and you get into your car? I like staying there for a good two minutes! I like that feeling.

Another one is eating really good food. It sounds basic, but I’ve always enjoyed finding food, and finding food that feels nourishing. And massages. I incorporated these things into my life after I started singing for a living, so it’s something that kind of new to me. It’s not like I’ve always been doing this stuff – except for good food!

On the music she’s listening to right now and her favourite artists working today:

It’s interesting, I always feel really removed – it’s always been something that’s really hard for me to answer. I often go back to things that I’ve fixated on before. So, lately, I’ve been listening to a lot of Joanna Newsom, and I’ve also been listening to a lot of Tink. It’s a weird feeling – she [Tink] just makes me feel like myself. I don’t know how to explain it, but there is a feeling that she is really sincere and straightforward, and not really embellished and extra. It doesn’t feel like she’s trying too hard, and it makes me get in touch with what I really feel, and what I really think.

Lately, the discovery of Whitney Houston being queer gave me a lot of different… I don’t know, it meant something. I think a lot of people that we don’t think are queer, are queer. So I find a lot of solace just knowing that it’s a really difficult thing for people to speak on or admit. But, especially when I think about powerful women in music, it is really hard to think of icons that are not queer – that I can guarantee are straight, you know what I mean?

On her favourite cities in the world:

I would have to say the ones that I frequent a lot: London, NYC and Los Angeles. I have new good feelings every time I go. It’s hard to experience those good things through the fog of London, but once you get through the fog, you can experience that for real! And I experience it all the time, especially in the people and creativity coming out of that city.

I love Miami; Atlanta. I have a weird relationship with Italy. There’s part of me that really loves it: that Old World, romantic idea of what Italy is in a lot of people’s minds. There’s a lot of that, but there’s also so much that I find problematic; it’s really hard for me to reconcile those two things. I used to go to a place called Mantua in northern Italy. It’s a small old town, and it gives you that feeling. But, especially as a Black woman, being in Mantua is a pretty complicated thing. It’s a weird one, you know? I find myself in that position in a lot of places in the world. I have to step a little bit outside of what it is to be me, in order to really enjoy a space. That’s just a part of my life.

On the websites she reads regularly and the books she’s got on the go:

I don’t go to The Atlantic, but I find myself reading a lot of articles that are published by The Atlantic. Right now, I’ve been reading The New Jim Crow by Michelle Alexander, and I’ve just been getting really into my audiobooks; that’s another one that I’m trying to incorporate into my life. It’s always hard for me to sit and read! It’s always been that way since I was a kid.

Oh, Citizen is another great book, by Claudia Rankin.

On her favourite thing to cook:

Probably lentil soup. I like making lentil soup with all the things that I really need. I like vegetables; I’ve always loved lentils. Another thing I really enjoyed cooking the other day – or more like preparing – was a salad with roasted vegetables and smoked trout. It was so good!

On the movies she’s seen a hundred times, but will still throw on whenever she’s feeling shitty or tired or hungover:

[Laughing] Lately, the one that comes to mind, and I get so much joy out of this movie – I just laugh so hard and feel so good – is Zootopia. Have you seen that film!? It’s a cartoon. You have to see it! It’s such a good film, it’s really smart, its core values I’m really in alignment with. It’s really sweet.