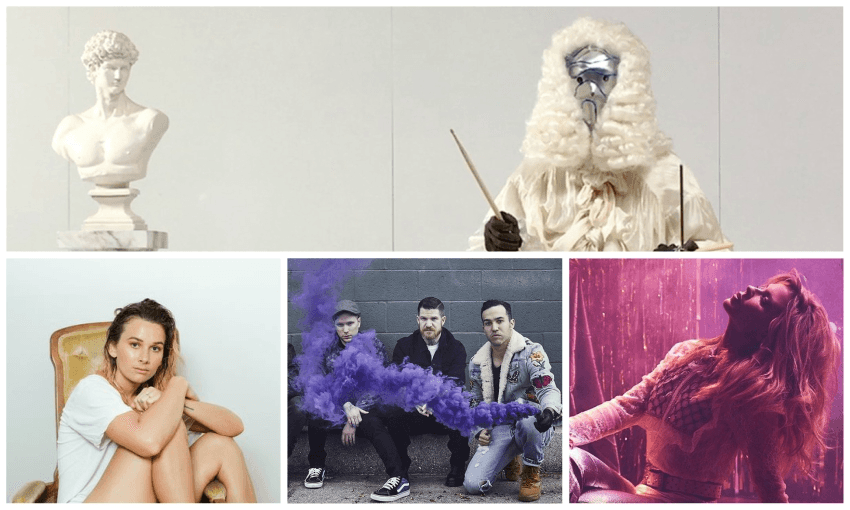 Kody is Kody again, the same but different

After spending the last few years making music as Silicon, and co-writing award-winning songs with Bic Runga and Unknown Mortal Orchestra, Kody Nielson is stepping out once again under his own name. His new album, Birthday Suite, is cleverly made up of songs that he plans to drop on the birthdays of family and friends, starting with ‘Bic’s Birthday’, a buzzed-out, psychedelic jam dedicated to Runga and released over the weekend. Awww. Like Devils, the last record he released under his own name, this one is fully instrumental. “I just feel like there’s maybe too many singer-songwriter lyricists at the moment,” Nielson has said. “And it seems like you need something really special to say, or something important.” Nielson’s also had a hand in the new UMO record that’s out this year, so expect to hear a lot more from him in 2018. / Hussein Moses

Kody Nielsen released ‘Bic’s Birthday’ in honour of his partner, Bic Runga, (and her birthday, of course). Kody flaunts his knowledge of classical music and his adoration for composers Bach and Stravinsky. ‘Bic’s Birthday’ is a modern day re-interpretation of Baroque, with prancing melodies led by whopping synths while softer piano harmonies take a back seat. ‘Bic’s Birthday’ feels like it should be played in a pristine cathedral – but with purple strobe lights, blue lasers and a smoke machine. Kody is making Baroque music ‘cool’ again, just like it was 300 years ago. / Jess Fu

19 January marks an important date for both halves of synth-pop sibling-duo Broods. While Caleb Nott’s gearing up to make some carbonated dairy-infused waves with his new project Fizzy Milk, Georgia Nott has today announced her new solo side venture The Venus Project, a project created and recorded entirely by women, with this the first single. ‘Won’t Hurt’ is soft and dreamy and vulnerable, evoking a feeling of comfort in isolation. It sounds like floating into the ether and embracing all your perceived inadequacies. Pain and bliss, all at once. If ‘Won’t Hurt’ is indicative of what the rest of the album may hold then it’s a pleasant change from the sort of edgy electro-pop sound Georgia’s been building on through Broods’ Evergreen (2014) and Conscious (2016). This track encompasses the kind of silent suffering that is unique to so many women and yet an increasingly common feeling for all. / Jogai Bhatt

Normally, I’d be all about a brother and sister due releasing their debut solo singles on the same day (see above), but with the Venus Project’s feminist backstory, having Caleb Nott’s not-explicitly-feminist single out the same day as his sister’s just seems a little odd. Especially if it was written, produced and recorded by males. (I don’t know if it is, just sayin’…) Pretty good song, just weird timing. / Henry Oliver

You’re better than this Kylie

Dancing starts with an acoustic guitar. This is not how I know Kylie. This is not how I love Kylie. It felt like the aural version of Samara coming out of the television during The Ring – how could I have expected this, was it my fault, did I do this to myself? In a post-‘Can’t Get You Out Of My Head’ world, Kylie Minogue has cleanly and comfortably moved into a niche of A-list pop that nobody else in her age group fits into. She’s not breaking boundaries like Madonna, she’s not progressive like Beyonce, she’s not an empty brand like Britney; she makes elegant, slightly forward thinking and slightly stately pop. There’s a coolness to Kylie Minogue that makes her stand apart from the others: she’s the one who did a bit in Nick Cave’s documentary, she had a role in a Leos Carax film, she did a tour where she explicitly only sang B-sides and released a mini-album with Fernando Garibay.

None of that Kylie is in ‘Dancing’, a song which shares a co-writer with Ed Sheeran mopefest ‘Thinking Out Loud’. The warmness of her voice sticks, like if you put Sophie Ellis Bextor in the microwave, but it’s a toothless little bit of country-pop with a barely there hook and some absolutely pedestrian vocal stuttering. By the time you’ve hit next, you don’t even know what you’ve skipped. How is this the lead single from a Kylie Minogue album?! Put Samara back in the TV. / Sam Brooks

Since their mid-00s heyday, Fall Out Boy have been a band that could be described as ‘interesting’ at worst and ‘underrated’ at best. Their last few records have seen them heavily augment their emo-adjacent anthems with elements of modern pop and R&B songwriting and production, which when it hits, it hits, and when you catch it you wonder, ‘why isn’t this all over the radio right now?’ b/w ‘if a young band came out with this right now they’d be huge!’

Hearing the start of ‘Wilson (Expensive Mistakes)’ (classic Fall Out Boy song title) your first instinct might be to check it’s not some vaped-out remix of ‘Paper Planes’, but go with it and they’ll deliver you to a chorus as big and hooky as anything from the good old days of twelve years ago. Speaking of 12 years ago, the refrain “I’ll stop wearing black when they make a darker colour” would have made an awesome Myspace bio. / Calum Henderson

‘Talkin’ Sh*t in Outerspace’ sounds like a homage to the weirdo tunes I remember on C4 when I stayed up past midnight to watch it. Once midnight rolled around, you knew the good stuff was coming. And like a lot of those tracks, the keys here are woozy and ice-cold. The repetition of the riff feels so precise and calculated that it verges on dizzying. It’s all very off-putting, which of course is the point. The concept of outer space is the focus on the track, and it is made clear that WhyFi are fascinated by its emptiness and sheer size. In that respect, the name of the song is appropriate. There’s no “shit talking” on this track though, vocals instead come in the shape of robotic murmurs. It makes the song surprisingly sombre, but WhyFi manages to finds life in outer space through the beat. It thumps hard, injecting energy into something that would otherwise be dominated by weirdness./ Alex Lyall

It’s common to see three or more names together in the artist field of a new release these days, but “Superchunk, Waxahatchee, Stephin Merritt” still came as a bit of a surprise. The common thread is Merge Records, the indie label home to the two guest vocalists and founded in 1989 by Mac McCaughan and Laura Ballance from Superchunk. The veteran band seem to have embraced the spirit of collaboration on their forthcoming album, and adding the distinctive voices of Waxahatchee’s Katie Crutchfield and the Magnetic Fields’ Stephin Merritt to the chorus of ‘Erasure’ turns out to be an inspired move. The song itself is classic fuzzed-out power pop firmly at the ‘power’ end of the spectrum, fired up at the state of it all. “What you’re after – erasure” is a sick chorus lyric, whatever way you choose to interpret it. / CH