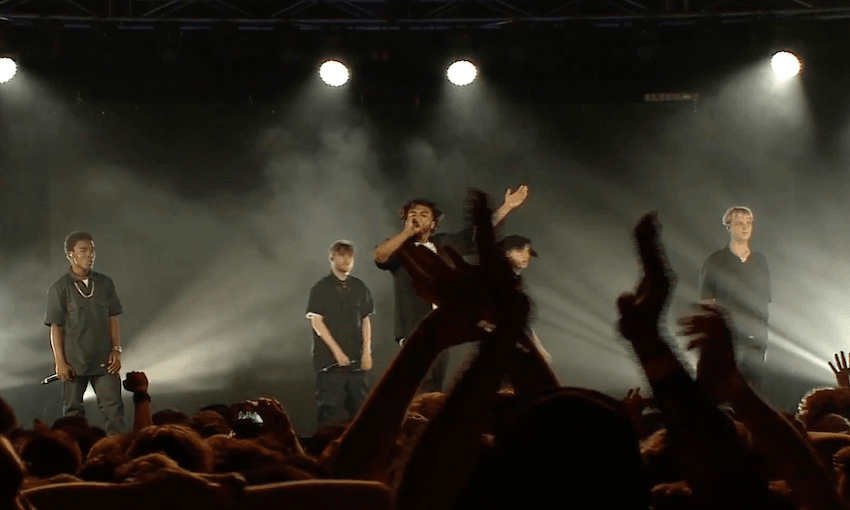 Brockhampton are a new breed of boyband who have quickly risen from a Kanye messageboard to a multi-million-dollar record deal. Reilly Hodson reviews their new album, documentary and concert in Auckland last night.

“I think that we wake up every morning and think about what we can make to make people happy,” says Kevin Abstract, the de facto frontman for Brockhampton, to the packed crowd at the Hollywood Cinema in Avondale. We’ve just seen their documentary, The Longest Summer in America, and everyone is fizzing.

The last few years have been a wild ride for Brockhampton. They’ve released five albums, recorded a bunch more that never came out, signed a major label deal, kicked out a core member, recorded at Abbey Road, and now they’re in New Zealand, playing Auckland on the release day of their major label debut, Iridescence.

In many ways, Brockhampton is a microcosm of the journey that pop culture has taken over the past few years. They’re a boyband in a way that redefines the term, encompassing vocals, production, design, film-making and more. They met on a Kanye West fan forum, and their music is probably best described as post-Kanye. They make hip-hop music, but some of the songs don’t have raps, and their inspirations include My Chemical Romance and Mariah Carey. Their music stems from a life lived online, from growing up with the history of pop music instantly accessible. Their very existence delivers on the promise we’ve always been given about new technology: that you can do anything you want, with no barriers to entry.

The Longest Summer in America follows Brockhampton’s tumultuous journey since the close of their Saturation trilogy, three albums released in a six-month span that saw them explode into mainstream recognition. The first words we hear are from Abstract, “everything was perfect at that moment.”

We’re shown a montage of joy, the band having come off an immensely successful year and throwing themselves back into their work. They’re playing in the pool at the Beverley Hills home where they live together (the “Brockhampton Factory”), shooting lookbooks for a new merch line, and spending their every spare moment making music. And the songs are really, really good. At one point, we get shown the fully shot video for a track called ‘Ready for War’, a song which will never see official release, but which sums them up as a group so well: it’s a banger, but dives pretty deeply into their personal experiences, the joy and stresses that come from their new $15 million deal with RCA. In a heartbreaking turn for the audience, who all know what’s coming, Ameer Vann raps about his suicidal thoughts and struggles with depression, and how being a member of the group saved his life.

The group heads back out on tour, playing Coachella and other festivals, and while they’re on the road a bombshell gets dropped on them all. Ameer is the subject of a number of allegations, including sexual abuse and statutory rape. The scenes that follow are extremely tough. Various members recount the events, breaking down at the memory. After some handwringing, the band decide to perform without Ameer at the Boston Calling festival, without having time to cut his verses out of the instrumentals. The band break down on stage, and after an argument in the rain, Ameer is gone for good.

For the remainder of the film, the group grapple with their complicity in Ameer’s alleged wrongdoing and their responses afterwards, and an attempt to recover artistically. It’s a frank and moving experience, to see these guys, none of whom are older than 23, come to terms with the fact that a good friend, a brother, could have done these terrible things, and that they defended him without hesitation. They eventually head back on tour on the back of some new singles and end up in London, where they shack up at Abbey Road for 10 days to make a new record, Iridescence, which they say is the culmination of all of their highs and lows over the past year.

Joba says at the Q&A after the screening that “at some point, the art that you make validates you to your core”, and that’s his goal with any body of work. Iridescence, more so than the Saturation trilogy or any of their previous work, feels like just that. It’s quite a departure from Saturations 1-3, with a lot more sonic experimentation from the group, and many members stepping outside of their pre-defined roles. Romil Hemnani, the mastermind producer behind most of the songs along with Jabari Manwa, is a wizard on this album, flipping songs and creating the sonic journey of the album, through the highs and lows, the bangers and the songs that make you want to curl up and cry. Every once in a while, part of a song makes you sit bolt upright like “did that really just happen?”

The group say that their experience on tour in Europe re-energised them for the album, and you can feel the influence of Europe and the UK all over the tracks. The beats borrow from rave and grime culture, and the “ghosts” Romil says he felt in the room at Abbey Road feel like they were on his mind. In the documentary, he particularly notes that Frank Ocean’s Blonde, Amy Winehouse’s last songs, and Pink Floyd’s Dark Side of the Moon were all recorded in that room. It’s a pretty broad set of influences, but if Brockhampton is anything, it’s that.

Iridescence is a barnstorming romp of an album at times, but it has an intense emotional depth on repeat listening. Particularly with the context of the documentary, I caught myself every once in a while crying while bopping up and down to the beats. Even the songs that feel at the first glance like straightforward bangers have some heavy lyrical content. ‘TONYA’ is the song they wrote in Hawaii after the Ameer scandal, and it’s beautiful. The boys come to terms with what fame has done to them, and the feeling of powerless that came after everything that went down. It’s a song that will break you down into pieces and you won’t be able to get it out of your head. There’s a reason that many of the members say it’s the most significant song they’ve written.

Another high point on the album is ‘WEIGHT’, where Kevin goes deep on when he realised he was gay, and Dom McLennon goes deep on his struggles with mental health. Dom broke down during his verse when they performed it live for the first time at the Logan Campbell Centre, a moment he described afterwards on Twitter as “the fog in your head clearing for the first time.” It was a pretty affecting moment to watch, and the song is one of the best examples of a sad boy tune I’ve heard.

The following night, Brockhampton used their sold-out show at the Logan Campbell to play the whole of Iridescence start to finish. It was a strange start, as, since the album had been out for less than 24 hours at that point, no one really knew the songs. That fact compounded with some sound issues that meant that you couldn’t really hear any of the vocals despite being right in the middle of the room meant that the show wasn’t exactly off on a great foot from a the audience’s point of view.

But Brockhampton are absolutely pro performers. Sound issues notwithstanding, they delivered a slick performance, and although Bearface and Kevin Abstract apologised for being less than perfect on Twitter while we were still in the carpark, you could tell they were giving it their all. I’ve watched a number of their older performances online, and the show on Friday felt like a completely different group. They had thought out their staging, and mostly just felt way more comfortable on the stage than they had at other shows. They can’t really dance, but they do anyway in that way that people do when they’re completely possessed by a great piece of music. It felt organic and real, and most of all, fun.

When the album finished, they started to roll out the hits, and that’s when everything turned the fuck up. It’s amazing the difference everyone knowing the words and songs will make on a show, and this crowd knew all the words. It didn’t matter that they’d been jumping and screaming for an hour at that point, everything just turned up to 11. Any sound issues went out the window and everyone joined together to get down to this group of 22-something weirdos who, for whatever reason, in whatever way, had changed their lives. It was a pretty awesome thing to be a part of. (Also, I didn’t hear any white people singing along with the N-word, so that was positive.)

At one point, in between songs, members of the group started a lyric and just saw how long the crowd would continue. You could see their surprise as we kept going until they stopped us. When they finally went off, and the lights came up, there was the longest chant for an encore that I’ve ever witnessed. Call it naivety and a young crowd who don’t realise that once the house lights are up that’s it, but I think it’s just because they didn’t want to believe that it was over.