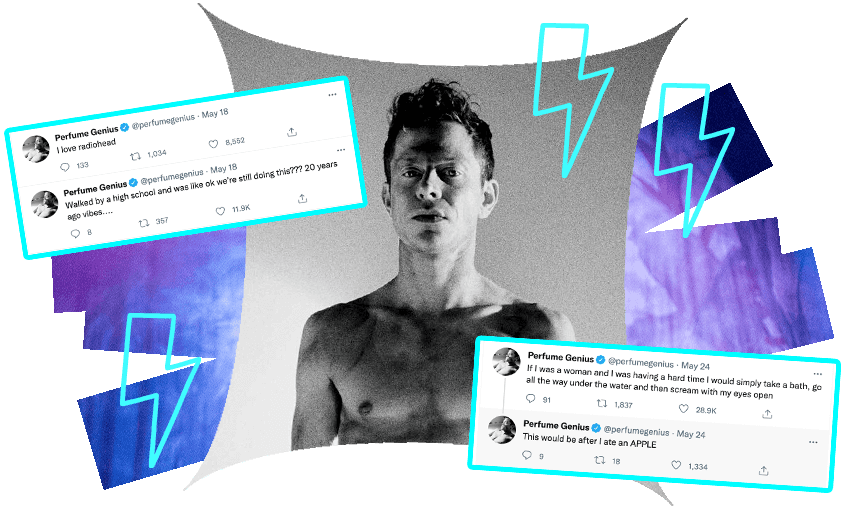 He’s a critically acclaimed musician with a new album out next month. But to some, Perfume Genius is known solely as an excellent Twitter account. He talks to Sam Brooks about how he balances these two modes of self-expression.

There are two wolves inside Mike Hadreas. There’s the critically acclaimed musical persona Perfume Genius, which slinks smoothly and sexily between genres both on record and in unabashedly emotive and sincere live performances. And then there’s the guy who tweets “Why am I gay” followed by a photo of Tori Amos at her laptop.

These wolves exist simultaneously, and both of them are great.

Now the musician wolf is finally able to tour again after Covid lockdowns prevented him from touring in support of his last album, Set My Heart on Fire Immediately. That album was released in February 2020, just as the pandemic took hold across the world. Hadreas had to turn to other means to promote the album, including doing live streams from his house, which he admits he was initially reluctant to do.

But he’s proud of the culmination of those live streams: a concert at the Palace Theatre in Los Angeles, with all the ticket proceeds benefitting Immigration Equality, a queer immigrant rights group. It took place in an empty venue, featuring a reduced, socially distanced, six-person band. “It all really came together in a way that feels really satisfying and feels exactly like what I’m supposed to be doing,” he says. “Maybe it wouldn’t have been like that, if I would’ve gone ahead with all my ideas from two years ago.

“To be honest, two years ago, I was very manic. I was in a really intense place. I wasn’t grounded at all.”

One full album cycle later, he’s finally setting out in support of his next record, Ugly Season, due to be released on June 17. For Hadreas, touring again after a two-year hiatus feels strange but familiar at the same time. “It’s like a lot of things are,” he says. “There’s this tension, which makes shows feel really wild sometimes. Sometimes it feels more unhinged than usual because everybody’s just a little more unhinged than usual, and then some crowds feel maybe more tentative or shy.”

“Or maybe it’s been so long that I don’t even really know, and I don’t have an accurate read on anything!”

When it comes to touring again, his reference point is Station Eleven, the Emily St John Mandel novel (recently adapted into an acclaimed TV series) about a Shakespeare troupe touring in a post-pandemic wasteland America. “It feels like camp. It feels post apocalyptic, it feels like we’re not really supposed to be doing it,” he says. Aside from that, the live performance process is just as stressful for him as ever – putting the concept together, rehearsing it and putting it all in a tour bus to make every night work.

Thus far, the shows – all in the USA and Canada so far, before heading here in June –  have felt a lot more sentimental than in pre-Covid times. He chalks it up to people being more emotional, needing the live-communion experience more. “It feels rebellious,” he says. “Especially since everything’s shitty too. Things are just shitty and to spend an hour doing something gay and fun and weird and not necessary, according to a lot of people… It feels rebellious. And fun.”

That energy might also explain Hadreas’ Twitter account. His music is esoteric, full-hearted, and earnest in the least cringe way. His tweets are arch, camp and ever so slightly unhinged. The only thing that unites the two is that, well, they’re both really gay.

He has nearly a million followers on Twitter, an impressive feat considering there’s almost no overlap between his music and his tweets beyond the name behind them. For context: indie icon Phoebe Bridgers, who provided harmony vocals for ‘On the Floor’ on his last album, has just over 550K followers. And at the far end of the commercial spectrum, 2021’s superstar Olivia Rodrigo has 1.8M.

“I think I need an outlet. All the time,” Hadreas says of his tweets. “My outlet is not the one you’re supposed to use day-to-day, like talking. Doing regular stuff doesn’t feel like an outlet to me. It feels hard and I need somewhere to put my excess energy that wouldn’t be appropriate to bring into conversation.” As of this writing, Hadreas’s latest tweets include a promo for a collaboration with the Yeah Yeah Yeahs, a TikTok video he has put his voice over, and this string of words:

He used to worry that his online presence would get in the way of his music, or they would clash with each other, but now he’s come to accept that they kind of do and that’s OK. A lot of the people who follow him don’t know that he makes music, just that he tweets about “aliens queefing”.

There’s also plenty of crossover between his two fanbases. People will shout things at shows that are from his tweets, not from a record – often about his advocacy for rat arthritis. “It can pull you out,” he says. “I like it, though. I like reading the chat whenever I’ve done some live streaming. It’s so deranged. I just hope I’ve cultivated some fanbase, however small it is, that is just completely deranged.”

There’s something compellingly human about the two sides of Hadreas’s persona – the intense, rich world of his music, and the fleeting, flash-in-the-pan brilliance of his tweets. These two sides of his persona exist more in conversation with each other these days than in competition.

“I’m grateful for being able to share all those things. People stay on board with me”, he says. “Because it’s actually all close together, and part of the same thing. Whenever I’ve tried to do it against my gut, or anything against the why I naturally would, it sucks. It just doesn’t work. I really can’t do it another way.”

Perfume Genius plays the Powerstation in Auckland on June 6 and San Fran in Wellington on June 7. You can book tickets here.