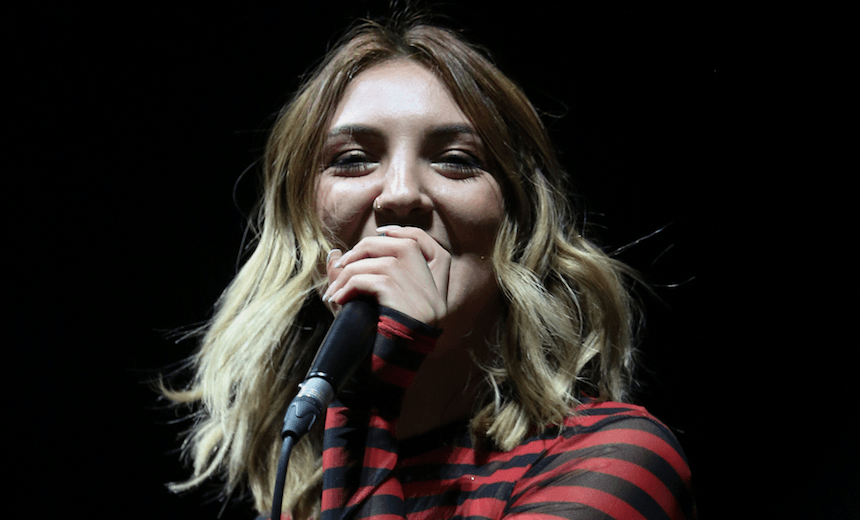 That’s songwriter-popstar Julia Michaels talking about her song ‘The Worst In Me’ from this year’s EP Nervous System. It’s a song that’s hard for her to sing, and her frankness is surprising – until you look at her songs, and how intimate they are.

Although you should have recently heard the monster-hit, double-platinum, now Grammy-nominated ‘Issues’ from that album, you’ve been hearing Julia Michaels’ songs for a few years now.

‘Love Myself’? Also her.

‘Sorry’, the song that made Justin Bieber cool for adults to listen to? Absolutely her.

Did you love Gwen Stefani’s underrated 2016 post-divorce album This Is What The Truth Feels Like or Britney Spears’ equally underrated and progressive Glory? She co-wrote all those songs.

These are big names, these are huge hits, these are songs that you’ve listened to on repeat. But what makes these songs, and Julia Michaels as a songwriter, so special?

Michaels talks about her craft with a frankness, and a gregariousness, that was surprising but shouldn’t have been. I enter into the interview having listened to a playlist of many songs she’s written, from her more well-known hits like Fifth Harmony’s ‘Miss Movin’ On’ and Selena Gomez’s ‘Hands to Myself’ (hands down one of the best songs of the past five years) to her more obscure tracks like Pia Mia’s ‘Touch’ and Bea Miller’s ‘Repercussions’.

But it turns out when you do that, when you listen to your interviewee’s hits, you get intimidated because you’ve had these songs running around your head for ages and they’ve scored some of your darkest/drunkest times. But within moments, we’re like old high school friends. She’s chill, she’s lovely, and she really likes my nails. We discuss them longer than we should given the limited time I have.

There’s a common feeling that runs through all her songs and even though many of these are co-writes (often with Justin Tranter, of Semi-Precious Weapons) there’s a disarming intimacy to her lyrics that feels designed for this headphone age.

Whether it’s through the very distinctive warble of Gwen Stefani or Selena Gomez’s whisper, when you listen to her songs you feel like you’re being let in on somebody’s private life, like you’re reading their scribbles in their diary. “Sometimes they’re hard to give away but as a songwriter that’s just what you do – you always give your babies away,” she says when I ask her what it was like to hand over those songs. “It’s awesome as an artist you get to keep all of the precious ones.”

And it’s not like she’s giving away these babies to any old parents. These are the hitmakers and the legends here. She’s written songs for people as diverse as Hailee Steinfeld, Shakira and even Linkin Park. “It’s kind of worth of mouth,” she says. “You work with one person and the experience goes really well and then they tell somebody else about the experience and then you end up working with that person and then sometimes one song can turn into such an intense chemistry that it lasts a whole album so it just, it just depends.”

She’s kept some of the most precious ones – and one of those songs is ‘Issues’.

The first time I heard ‘Issues’ I was on an unfamiliar bed in Christchurch, wondering about my life choices and mortality. I was familiar with Julia Michaels, because I’m a pop nerd and like finding out who writes songs I love, but I’d never heard her actually sing before. I didn’t even listen to the preview – I knew Julia Michaels had written one of my favourite songs of the past few years, ‘Hands to Myself’, and I would throw any amount of money at her so I simply bought it on iTunes, plugged my shitty headphones into my phone and pressed play.

It starts with that heavy plink-plonk piano, sounding like a moody Jacqueline-in-The-Box who had too many wine coolers the previous line.

I had that moment that I used to have when I was 13 and listening to Evanescence, or 16 and listening to Cat Power, or any age and listening to Tori Amos. I thought, ‘This song is about me. This person has surgically opened my soul, climbed in, and stolen it for her own purposes, and I want to thank her for it.’

I rolled over in that unfamiliar Cantabrian bed and felt understood, felt seen, and I knew that before the end of the year, millions of people around the world would have had the same feeling towards this song.

‘Issues’ is one of those huge songs that doesn’t immediately feel like a huge song. It doesn’t blow down your door, it sneaks in the window and lies down in your bed next to you. It doesn’t have the maximalism of a Max Martin monster or the removed chill of a Rihanna joint, it creeps up inside of you and makes you feel.

That’s the power of a Julia Michaels song. It’s truly intimate. It feels like you’re reading somebody’s diary, not in the TMI-Tumblr-post kind of way, but she phrases things the way that people wish they thought.

Take this bit from ‘Issues:

You do shit on purpose

You get mad and you break things

Push you out, pull you back in

Even without Julia Michaels’ distinctive rasp singing it, you can almost see her writing it in a little journal, with some words angrily underlined, others in all caps, and it all being very, very messy.

Who hasn’t felt that?

And that’s what, I think, makes Julia Michaels special. She puts into words the things that you’ve felt but don’t know how to put into words; it’s what any great writer does. She thinks your thoughts for you, and in her case, she puts them together with catchy hooks that dig into your brain.

Seeing a songwriter perform their songs is a strange experience. With lots of concerts, it’s a given. But pop music is another realm entirely. When you go and see Beyoncé, you know you’re getting Beyoncé, but the songs are somebody else’s words and thoughts filtered through her artistry. It’s the same with many of our pop titans – Britney Spears, Jennifer Lopez, Justin Bieber – you go to their church for the mass, not the confession.

So seeing Julia Michaels – someone whose words have been reverberating around my cheap headphones for years now – actually sing her songs live was a surprisingly raw experience. And it sounds raw for her too. She describes the experience of performing ‘The Worst In Me’ as “ah, a little hard”.

“It’s funny, as a songwriter you can write the song and then you can give it to somebody and never have to worry about singing it again. And now as an artist, I’m reliving all of these memories and it’s horrible.”

As a performer, Michaels splits the difference between pop star and songwriter. She’s got all the smoke-and-mirrors-bells-and-whistles of someone who is doing a show to ten thousand people, and she’s also got the energy and charisma you need in pop. But there’s also a directness to her, you can imagine her doing this song in a cafe to twenty people.

If she has difficulty reliving the events in her songs, you don’t sense it. She gets everybody in the arena, some ten thousand strong, to turn their phone lights and point them out. Probably a popular move, but one that felt special. Suddenly the entire stadium is illuminated and you’ve got ten thousand people listening to this confessional song – many of them possibly hearing it for the first time – and it’s a song full of delicate little lines like:

Remember when I used to be happy for you?

Remember when you used to be happy for me?

You celebrate all my success without crossing a line

That’s some intimate stuff. That’s songwriter stuff. But she performs it with all the charisma and fire of a popstar. She performs it like someone who knows she can get ten thousand people to turn their phone light on despite how much battery power it will drain.

And it’s a revelation to hear her sing the hits she’s helped write for others. When she sings a medley of ‘Good For You’, ‘Love Myself’, ‘Bad Liar’ and ‘Sorry’, the entire arena is like ‘Holy shit I know this song! She wrote this?’ and people are standing up and getting into it. When you write not just one song like that, but multiple songs like that, you’ve got someone special.

But it’s not like Julia Michaels is a full Broadway kind of pop star like Katy Perry or Beyoncé who exists more as persona than human, it’s the more human kind of pop star we haven’t seen yet, the one who compliments your nails, the one you went to high school with.

It’s a once in a generation kind of person who can bridge that gap.