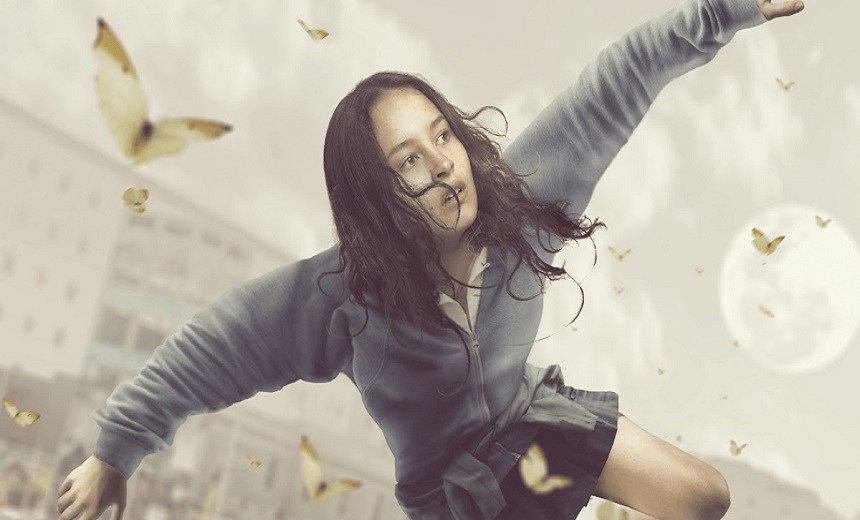 I saw myself in Laura: A 17 year old reviews The Changeover

Margaret Mahy’s young adult classic The Changeover was written in 1984, well before seventeen year-old student Bree Brown was even born. We asked Bree to review the new film adaptation.

The Changeover is a new film based on the book of the same name by Margaret Mahy. It tells the journey of a young girl struggling to rescue her brother from the deathly spell of an old man. To do this, she must change over from a “Sensitive” to a “True Witch”, and destroy the old man and his spells.

This coming-of-age film tells a common story of a simple rescue mission, but what separates it from its predecessors is the honest emotion that connects Laura to the film’s intended audience of young adults. We see Laura’s frustration at her own inability to help her brother. We see how unsure she is about what lies beyond adolescence. These conflicts are all a part of what it means to grow up, and they relate as truly to every young teen as they do to a magical witch.

The development of different relationships between characters and the tangible emotions is what makes this film feel so relatable. As we transition from teenagers to young adults, there are so many changes to our relationship dynamics with friends, family, and even strangers. So often the frustration and confusion of trying to understand who we are ourselves shows in our interaction with those around us.

We are trying to find the balance of forging our own independent path while also being a part of our family. In The Changeover, the love that Laura has for her brother Jacko is a driving force in the film, an intense need to protect him from the pain that the old man is causing. Undoubtedly she loves Jacko, but at times she resents the duty he represents when it clashes with other aspects of her life.

Due to the disaster of the Christchurch earthquake and the need for her mother to work long hours, it’s up to Laura to care for Jacko while attempting to balance her own life with that of a mother.

This is where The Changeover shines, in its portrayal of moving towards a new life while not abandoning the old one. It shows Laura’s emotions clearly. She is irked by the heightened responsibility of caring for her family. She yearns for the simpler life of a child – while also wanting to claim the independence of an adult.

This indecision about who she wants to be reflects the dilemma faced by teens everywhere as we try to move away from our family, in favour of friends who we feel know us better. Struggling with our own new, often invigorated emotions is an issue faced by a huge number of young adults, including myself and so many of my friends.

Going through this change did, at times, feel lonely. How could I be sure that anyone else was feeling what I did? Who else felt so unsure? Who else felt the inadequacy? The neuroticism?

The answer this film gave me was that if no one else, our powerful protagonist Laura did.

Laura is experiencing this growth from youth to adult as surely as any of us teens are.

Seeing our own deeply personal feelings paralleled within our heroine is refreshingly honest, and seeing them presented in a fantasy setting made the film feel human. Some stories fall short by painting a pretty picture, but The Changeover gives us a real world – sometimes painful and broken, yet beautiful as well.

Laura has so many hardships in her life, and it is through her love and loyalty for her family that helps her overcome her challenges. Her resilience in the face of adversity, frustration, and fear of the unknown is what allows her to become the witch she was born to be. It’s not through physical prowess or technical skill. Despite the daunting task that lies in front of her and the horrible events behind, she faces her fears head-on for the people she loves.

The resolution where we see Laura at peace with her inner self provides hope for those of us struggling with our emotions. Her punishing emotional journey is one that I’m sure I’m not alone in relating to, and this fulfilling conclusion allows for some optimism that we all may find this contentment.

I think that this film is one that young people should watch. It shows a difficult emotional journey where our honest, very human Laura must face a villain. She must do this by facing her innate insecurities and fears about the person she is, and who she wants to be.

I believe that this film will only encourage more teens to reflect on the hardest questions of who they are and what they believe.

This film will also help parents to understand the young people around them. It so honestly shows the uncertain and turbulent feelings of a young person trying to understand themselves that I’m sure watching it will give a parent a clearer idea of what goes on in their child’s developing mind.

Only good can come from understanding, and I believe that The Changeover has the potential to start some open and honest conversations between teens and their parents about their emotions, if they are both willing to talk.

Bree Brown is a seventeen-year-old student with a love for music, literature, and new experiences.