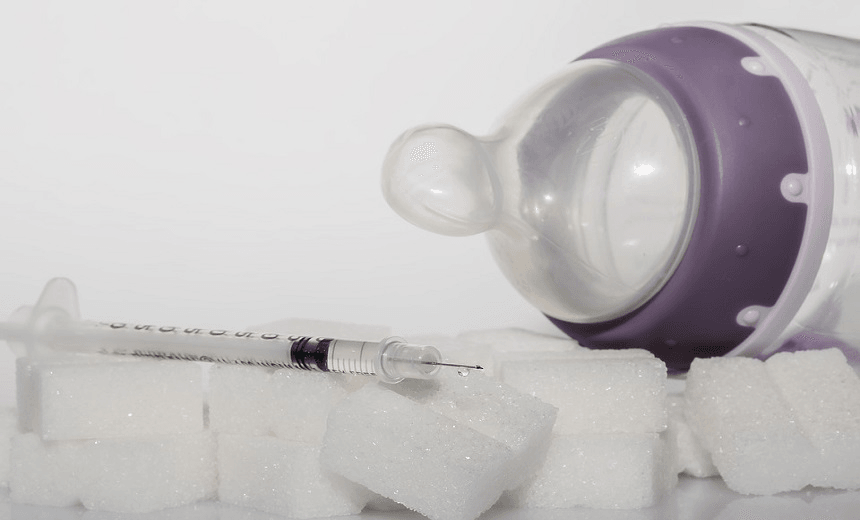 Fear and Formula: Why parents are a target for bad marketing

Roz Palethorpe is a new mum and a science teacher who wonders why parents and people trying to conceive are always a target for myths and pseudo-science.

It’s a well-understood phenomenon that fear is profitable. Make someone feel unsure or uncertain in their own judgement, offer a solution that happens to be your product, and watch the dollars roll in. For example, halitosis (bad breath) didn’t exist as a condition until the makers of Listerine started selling the idea, primarily to women that it was a medical problem that would make them unpopular and rejected, unless they used mouthwash to rid themselves of “fermentation of the oral cavity”.

The “halitosis appeal”, as this tactic is now known, is used to sell everything from yogurt to shampoo to car polish and is such an integral part of our media landscape that we barely notice it any more. However, it’s not just advertisers shilling toiletries who use the halitosis appeal to play to our weaknesses.

I’ve grown up with media advertising being used to undermine me almost as long as I can remember. I’ve been told my entire life by companies that, without their diet drink/roll-on deodorant/winged sanitary pads, I will die alone and unloved; and it will be my fault for not caring enough about myself to buy their product. It’s difficult to push back against these messages but not impossible, but once I became pregnant with my son last year the background hum of undermining and uncertainty became a roar.

People trying to conceive, pregnant people, and new parents attract fear tactics like whaea around a new baby in a cafe. As soon as my partner and I made it known that I was pregnant, the world suddenly became a terrifying place. Pregnancy is hard enough with the morning sickness, the fatigue, the mood swings and the constant, gnawing fear that you might lose this precious little spark floating around inside you. That fear makes you easy prey for people looking to make money off you. If you REALLY cared about your unborn baby, you’d take the supplements with the pregnant lady silhouette in pink on the box, not the ones your midwife prescribes. Isn’t your foetus worth a dollar a pill – despite them having the same ingredients?

If it’s bad when you’re pregnant, it becomes hellish as a parent. You’re sleep-deprived, hungry, confused, and terrified with the weight of a responsibility greater than you thought possible. You’re making decisions you didn’t even know existed, and someone else’s life is literally in your hands. You’re the perfect target for manufactured fear and the profits that go with it. The results can be devastating.

In 1974, the organisation War on Want released the report “The Baby Killer”, an investigation into Nestlé and similar companies. It found that baby formula manufacturers were entering economically deprived areas in countries like Chile, Malawi and Nigeria, and using the halitosis appeal among other marketing tactics to persuade new mothers to abandon breastfeeding and start using their formula. Sales reps dressed as nurses even entered hospitals and neonatal clinics, armed with free samples and inaccurate information about the dangers of breast feeding. Without access to sterilising equipment, the money to afford a steady supply of the formula, and even clean running water in some places, infant mortality and malnutrition skyrocketed. The report caused an international scandal that led to Nestlé being boycotted around the world.

The disgraced “scientist” Andrew Wakefield, who published a heavily-discredited paper suggesting a link between MMR and autism, is possibly the most cynical example of exploiting parental anxiety. He held the patent for a medical test that could be requested by lawyers acting for parents who were looking to sue doctors and hospitals over the “damage” vaccines had caused their children. This test would have netted Wakefield a cool $43 million. A year. He’d even invented a name for this disorder, “autistic enterocolitis”. Not quite as catchy as “halitosis”, but just as lucrative.

This month, Friends of the Earth Australia announced to great fanfare that they had discovered “toxic nanoparticles” in baby formula. Despite this being founded on shaky methodology and poor science, the story was picked up by news networks and parenting groups around the globe. Like Wakefield’s “autistic enterocolitis”, “nano-hydroxyapatite particles” sounds ominous. To a new parent who’s probably already dealing with the internal and external pressures of feeding their baby formula as well as or instead of breastmilk, the idea that there’s something unpronounceable and “toxic” in the cheerful tins they buy from the supermarket is terrifying.

So far, there’s been no alternative suggested by Friends of the Earth for those parents worried they’re poisoning their babies. It’s unlikely that they’re going to unveil their own brand of nanoparticle-free baby formula any time soon. It’s even possible that they really are just concerned citizens wanting to make the world a better place for our babies. However, given the history of using bad science and fear on already-anxious parents, I’ll wait until I see some real, quantifiable evidence before questioning my choices.

Roz Palethorpe is a mum, science teacher and writer. She can be found on Twitter at @grumpybirb.