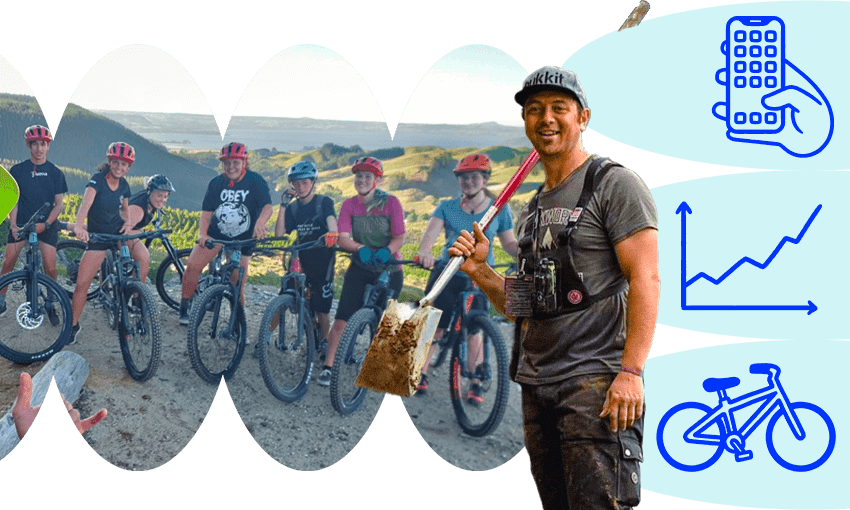 Rotorua is a world class destination for mountain bikers. But setting up a biking business in the middle of the forest was more difficult than Tuhua Mutu realised.

Tuhua Mutu (Ngāti Pikiao) believes in putting people first. The co-owner of Mountain Bike Rotorua, an adventure tourism company nestled in the iconic redwoods of Whakarewarewa Forest, first got into the adrenaline junkie space over his desire to share adventures with others.

“I love meeting people and taking them through experiences,” he says. “It was about going through these experiences with fresh people everyday and realising ‘hey, people are cool. I want to know more about these people’.”

It was this love of people that led Mutu into a social sciences course at university, and after a few brief diversions into other industries, what drew him back to doing what he loved. “The opportunity came to launch something new in the mountain biking space in Rotorua,” he says. He launched Mountain Bike Rotorua alongside his brother Takurua, and the pair are now co-owners of the business.

That ethos of putting people first is fully ingrained in Mountain Bike Rotorua. The business prides itself on sharing “the Māori beliefs of manaakitanga (caring for those around us), kaitiakitanga (protecting our planet and people) and whanaungatanga (creating lasting relationships with those we bring into our lives)”.

Mutu says Rotorua is a world class tourism destination, and mountain biking is one of its premium offerings. People travel from around the world to ride the trails of the Whakarewarewa Forest.

But building a new business in the middle of a forest wasn’t exactly easy. “When we set up, there were not a lot of services,” Mutu explains. It wasn’t just the lack of electricity – Mutu said the business initially relied on a generator – there was also the problem of phone coverage. If someone was injured or needed help when out on a bike trail, being able to get help quickly was key. Mutu says Vodafone came to the party straight away. “In 2011, smartphones were in their infancy, 3G was ‘wing and a prayer-ing it’ around the country, 4G wasn’t a thing yet. We were in the forest, we thought ‘we’re not sure how we’re going to make this work’.”

Even a week from launching, Mutu remembers thinking: “I don’t think these services are going to be ready.” With help from their Vodafone service manager, the team managed to get all their online equipment ready just in time for the opening – equipment crucial to the safety of the park’s guests.

When Mountain Bike Rotorua first launched, Mutu was its sole permanent staff member. “I had to make sure my phone was fully charged to be able to have any sort of internet and be able to email,” he says. “We had an 0800 number set up that would always come to my phone, but we were running off a generator for the first three months. It was quite a lot to go from that to what we have now. Now we have four different locations around the forest.”

Service reliability is paramount for the health and safety requirements of an adventure business situated in the forest, so Mutu tested all the available providers to find the best for their unique location. That coverage has proved integral to the operation running smoothly. “Speed is one thing, but consistency is more valuable to us,” he explains.

Since 2016, a “first response unit” of trained medics has operated a round-the-clock service in the forest, a bit like a land-based surf lifesaving operation. “Vodafone were there at the inception of that,” says Mutu. “What it required was stable, reliable service to make it happen. So that if people rang the special number they knew that someone would be on the other end and help them when they’re in need.”

Mountain Bike Rotorua has now gone from a one-staff, 30-bike operation to having dozens of full-time employees and around 200 bikes. Mutu says this could never have happened without the power of technology and good cell service and access to a strong internet connection. “Without those stable first few months and years, it’d be a cascading failure story rather than one of exponential growth.”