The Productivity Commission is investigating how people end up leading persistently disadvantaged lives, and what can be done to break the cycle. And it wants you to help shape its inquiry. Words by Max Rashbrooke; illustrations by Adele Jackson.

Think of it like a game of snakes and ladders – but for the highest possible stakes. Although everyone starts at a different place on the board, they are all aiming for the same goal: a fulfilling life lived in a flourishing community and on a healthy planet. But while each is trying their best, some are burdened by the loads they carry on their back, rendering them less able to climb the ladders – and more prone to stumbling, landing on a snake, and sliding right back to where they began.

This is the metaphorical world being investigated by the Productivity Commission, a New Zealand government agency that is empowered to think broadly about the forces that make this country more or less productive and prosperous. The government has asked the commission to inquire into persistent disadvantage, a state in which people face multiple forms of hardship over extended periods. While all forms of disadvantage are troubling, this one is especially so, because it has the potential to severely derail people’s lives and to be passed on to their children, creating a cycle of exclusion that can be hard to break. 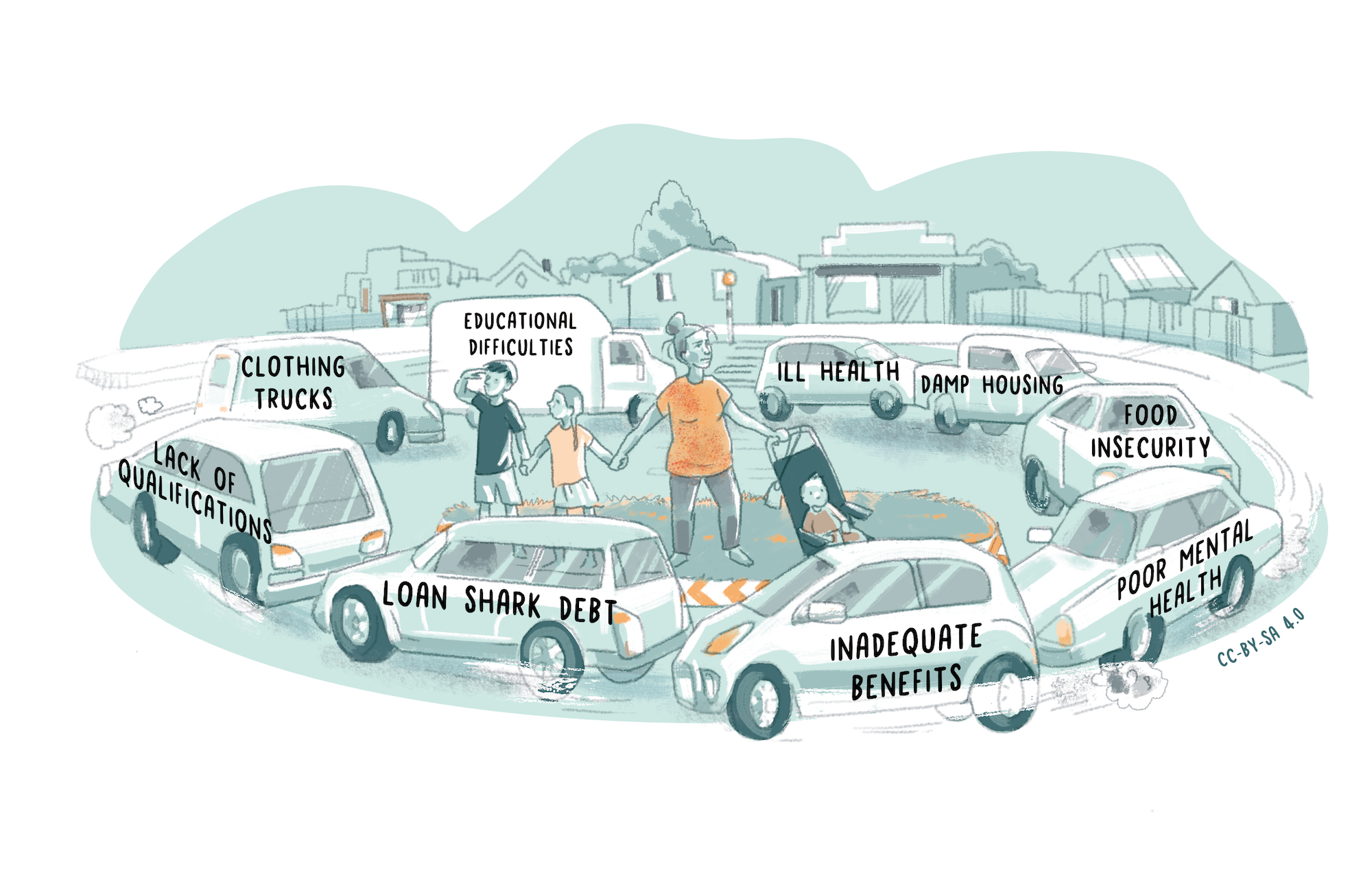 A few years ago, the Auckland City Mission ran a project called Family 100 that delved deeply into the forces conspiring to keep families and whānau in disadvantage. Out of this work came the story of Charlotte, a kind of “composite” character whose life resembles that of many of the City Mission’s guests.

A mother of three, Charlotte is parenting alone after leaving her partner due to his unpredictable behaviour. She grew up in difficult circumstances, with an abusive, often-absent father, and had her first child at 17. Her partner had gambling problems and bought expensive items on finance contracts that were often in her name. Now, she has been landed with the debt, but has none of the items it purchased.

Charlotte receives Sole Parent Support, which is often insufficient to cover her costs, forcing her to approach high-interest-charging finance companies and rely on extra support from food banks, WINZ, family, friends and neighbours. She is eagerly looking for work, but faces obstacles in the form of a lack of relevant skills, a past criminal conviction, and no vehicle for transport. The available jobs are often poorly paid and have difficult shift hours, forcing Charlotte to spend hours travelling and waiting for buses in unsafe locations. If she can’t get childcare at the right time, as is often the case, she either has to stop working or leave her 13-year-old in charge of the other children, risking their being taken away by the state.

The Productivity Commission is investigating how people end up leading persistently disadvantaged lives, and what can be done to break the cycle. They want your help to shape their inquiry. Click here to have your say.

Charlotte often goes without food herself to ensure her children get fed. Even so, she sometimes keeps them home from school because she cannot provide them with lunch. Trying to acquire enough food is one of the greatest drains on her time. In addition, Charlotte’s Housing New Zealand place is cold, damp and in disrepair. Her son has asthma, but she struggles to afford the relevant prescriptions or pay the power bill that would result from keeping the house warmer.

And although public services are supposed to – and sometimes genuinely do – help, Charlotte has to spend vast amounts of time and energy dealing with multiple different service providers and telling her story of neediness over and over. The bureaucratic requirements, the paperwork, the travel to appointments and the appointments themselves consume an enormous proportion of her week.

There are, in short, relatively few ladders that Charlotte can climb, and a very large number of snakes on which she might tread. Despite her best efforts, she is constantly confronted by her lack of income, and exhausted by the efforts needed to stay ahead of her bills. Having no savings, she has little ability to deal with sudden shocks. Any one of the above problems could suddenly derail her efforts to find permanent paid work, thus ensuring she remains in poverty. 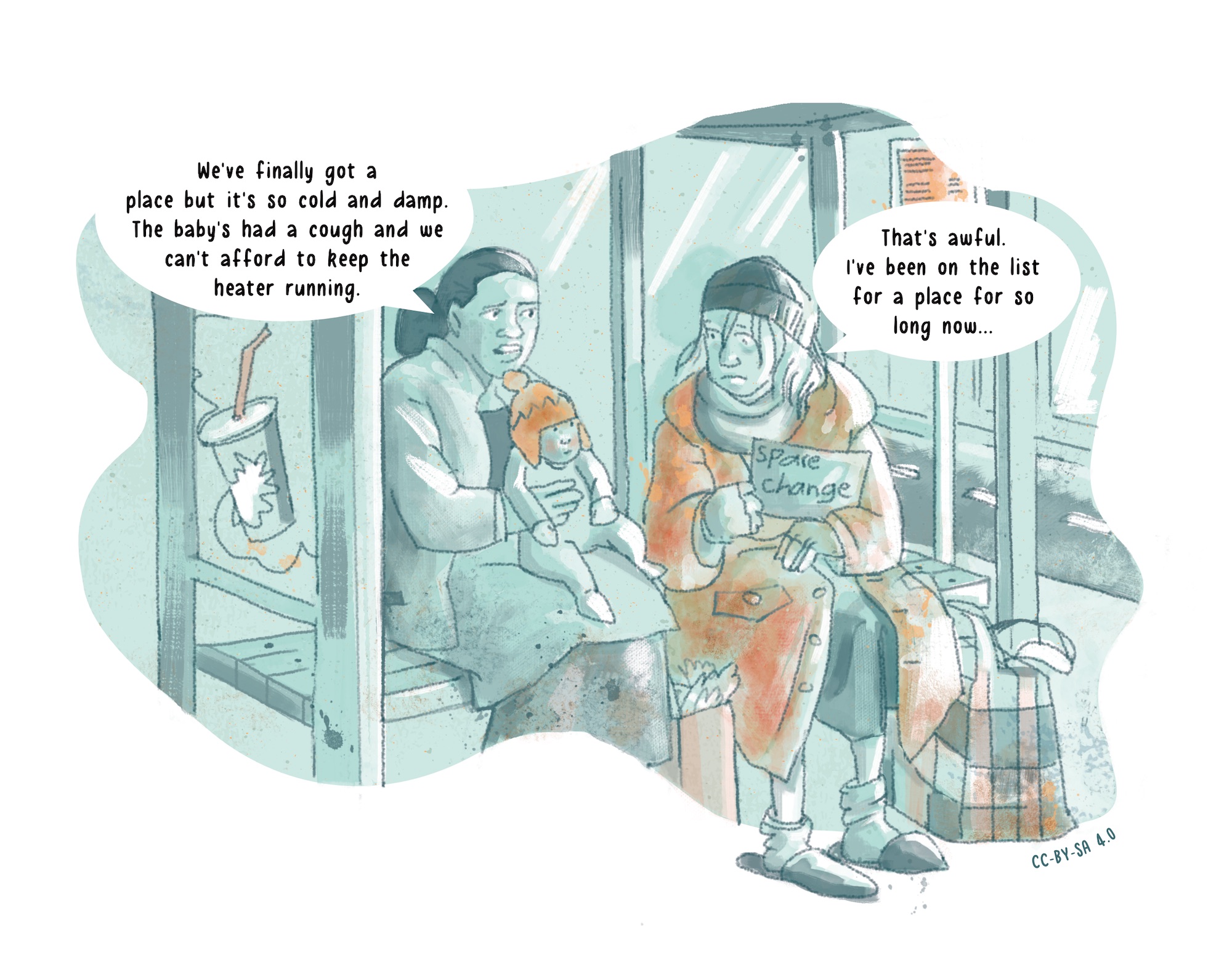 Although Charlotte’s story is, by design, a typical one, there is no single path by which people end up in disadvantage. They may have started out there, or ended up in poverty after a sudden life shock. They may have developed a major or chronic illness, struggled with their mental health, or experienced a sudden injury or disability. They may have been made redundant, with no other job to go to. They may have been a victim of crime or abuse, or suffered persistent discrimination. They may have developed an addiction to alcohol or drugs. And very often, these challenges go together: families that are resilient against one sudden economic shock may not be able to cope with several occurring at once.

Some of these shocks are inevitable, or at least very difficult for society to eliminate completely. But there are multiple ways in which public services could help people deal with – and minimise – such shocks. Social services could act as a fence at the top of the cliff, rather than the proverbial ambulance at the bottom, preventing disadvantage from occurring in the first place.

Being disadvantaged also has multiple facets. Partly it is about being poor in economic terms, lacking sufficient income and wealth for a decent life. In 2018, 16% of the population – one in six people – was living on less than half the typical income (after accounting for housing costs), which is internationally recognised as a point where people are unable to meet basic needs and participate in society.

But it’s also much broader than that. People can be disadvantaged by lacking the basic prerequisites for well-being, like high-quality and secure housing, employable skills, and good health. They may also lack the non-material things that contribute to well-being, such as living free from violence and crime, having a strong sense of identity and belonging, and enjoying supportive relationships with family, whānau and community. People living in what is termed disadvantage may, of course, have many sources of pride in their lives. They may be caring for children or elderly relatives, volunteering in their community, and contributing to society in multiple ways. They may have high ambitions for themselves and their community, and many strengths on which they could draw, if the situation allowed.

The communities in which they live can also be sources of strength, support and sustenance. People, after all, do not live alone: as social animals, they are profoundly shaped by the communities around them – and then influence those communities in their turn. A sense of disadvantage, loss and deprivation may be experienced as a community and be felt as a problem for the community as a whole.

Individuals living in disadvantage can have multiple forces holding them back, as Charlotte’s story indicates. Previous research has identified some of these forces, which can be likened to stones being placed in a backpack that people have to carry around with them on their journey through life. The Family 100 project, for instance, identified eight key factors holding families and whānau back from achieving their goals: debt, inability to find employment, issues arising from imprisonment and the justice system, poor quality housing, ill health, food insecurity, educational difficulties, and problems accessing services.

Beyond such research, New Zealand does not know much at the national level about who is most likely to experience persistent disadvantage. At any given point in time, Māori and Pacific Island families are twice as likely as Pākehā to experience poverty. Deprivation is also particularly marked among sole parent families, most of which are headed by women. But very little is known about how deprivation persists, and for whom. Australia, in contrast, has much better data on these issues: its research shows that half of those starting out on the bottom rung of the ladder will, 15 years later, either still be there or have moved up just one rung. Disadvantage can also be handed on from parent to child. This can start in the womb: research suggests that a mother’s material situation, stress levels and even nutrition can profoundly affect her child’s development in later life. The early years are also crucial. Overseas, long-term studies of programmes that boost family income find positive effects decades later, as the children are measurably more likely to be employed and in good health, compared to those growing up in families without such support.

These findings are a reminder that there are many things societies and governments can do to break cycles of disadvantage, both within people’s lifetimes and across generations. It is these kinds of solutions that the Productivity Commission will be seeking in its inquiry. But before it begins its search, it wants to hear your thoughts about where it should be looking and, when it comes to persistent disadvantage, what things matter most.

This content was created in paid partnership with the Productivity Commission.

They want your input to help break the cycle of disadvantage in New Zealand. Have your say on the Productivity Commission’s new inquiry.