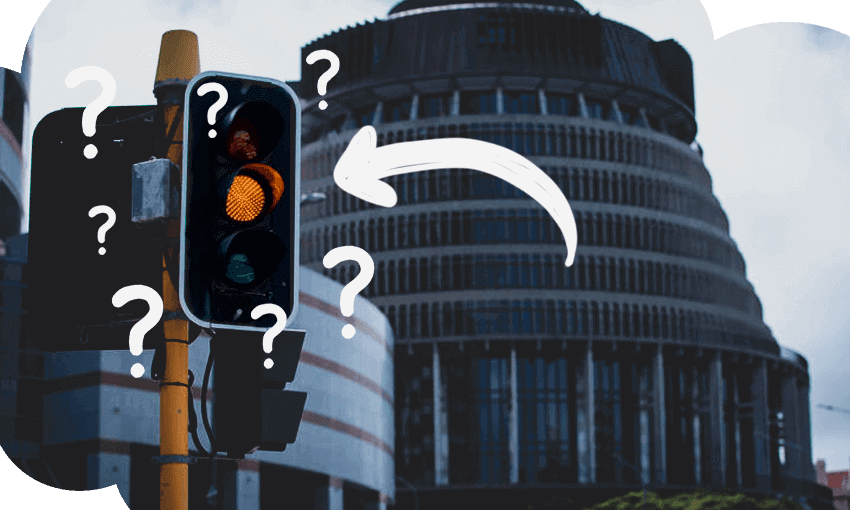 Was this the light that the prime minister stared at while designing the traffic light framework? Probably not tbh. Photo: RNZ / Angus Dreaver

Excuse me, what colour is this?

Was this the light that the prime minister stared at while designing the traffic light framework? Probably not tbh. Photo: RNZ / Angus Dreaver
Opinion

Attention drivers and other people who have from time to time looked at traffic lights: this is a scandal, writes Toby Manhire.

A brave new epoch in the New Zealand Covid response commences this week, as the alert level system is stashed away with old curtains and faded dreams in the attic, to be replaced by a bright new alternative: the traffic light framework.

The new system is based, naturally, on three colour settings. There’s red, there’s orange and there’s green. No green at the outset, mind you; all of the South Island is orange and the North Island is striped orange and red like Dick Van Dyke’s blazer in Mary Poppins.

So far, so why-are-you-telling-me-this-everyone-knows-it-already. I’ll tell you why. In reading around the traffic light framework I stumbled across something that will chill right-thinking citizens to their bones.

The shocking revelation is this: the official, state-approved settings for New Zealand traffic lights – the actual ones that stick out of the tarmac at intersections – are red, green, and, please take a seat, yellow.

There’s no orange. There’s not even an amber. There’s just – I shit you not – yellow.

Here is an instructional image from the New Zealand Rode Code. From the official documentation.

Look at it. Look again. What colour do you see?

I repeat: what do you see?

Let’s zoom out on that official Road Code image for a moment.

A banana is yellow. SpongeBob Squarepants is yellow. Tova O’Brien’s coat is yellow. The preferred sandpaper of the Australian cricket team is yellow. That traffic light described above as a “yellow light”? Not yellow.

Concerned about colours and my country, I pinged an email to Andrew Knackstedt, media guy at Waka Kotahi/NZTA. “I’ve just discovered,” I spluttered, “that the official nomenclature for traffic lights on NZ roads, including the Road Code, has the lights as red, green, and …. yellow! Yellow!? Can someone tell me why this is? Am I losing my mind?”

His reply was as swift as it was cruel. “Pretty simple answer really,” said Andy. “Because the signal is yellow.”

He added: “The advice in the Road Code reflects what is set out in legislation and in Land Transport Rules. See sections 3.2 and 3.4 of the Road User Rule for example.”

He was right enough about that. There it was in black and white – and yellow.

It’s a compelling case. Or would be, were it not for the sake that the light is manifestly fucking orange.

Andy wasn’t through. “This isn’t unique to NZ – most other jurisdictions also refer to yellow lights – see below from South Australia, for example,” he wrote, linking me to a South Australian state government site that I refused, on principle, to click on.

“Cheers,” he ended, laughing as he (presumably) cranked up Coldplay on the Waka Kotahi ghettoblaster and told all his colleagues about the idiot who’d written to him ranting about orangeness.

I thanked him for his response, bitterly. He emailed again an hour or so later.

“One of my learned colleagues has also just confirmed that the Australian/New Zealand Standard for traffic signals (AS/NZS2144:2002 Traffic signal lanterns) also refers to red, yellow and green. The same will likely be true for the North American and European standards.”

Yes, Andy, I know the Americans say “yellow” for their middle traffic light. But they also call their domestic sporting contests “the world series” and inedible mounds of gloop “cheese”. I reject this egregious American imperialism. I don’t know about continental Europe, but the British call it “amber”, which is really just another word for “orange”. They don’t call it yellow because it’s not yellow. It’s orange (amber).

If we called it amber, I’d be fine. Westminster system and all that. But orange is better, in keeping with our distaste for the posh, pretentious excesses of British life, such as the House of Lords, simulated sex with pigs and the word amber.

I went to the office of the New Zealand prime minister. She, after all, had got this one right – the colour in the Covid response traffic light framework is clear, unambiguous and true: orange. After a delay of some days – were they hiding something? – they came back and confirmed they didn’t focus group the colours. They didn’t do market research. It was clear they hadn’t consulted sections 3.2 and 3.4 of the Road User Rule or AS/NZS2144:2002 or the South Australian Driver’s Handbook. They’ve got a pandemic to tackle. What they’d done instead is look at traffic lights, noticed that the middle one was orange and written down “Orange”.

I leave the final word to my colleague Natalie, probably the sharpest knife in the office; a person who calls a spade a spade, bullshit bullshit and something that is orange orange.

“You’re either an amber gambler or running a late orange,” she said, in response to other colleagues who had shared wrong opinions in our work Slack. “There is no yellow. If there was, Cobb & Co would use pineapple instead of orange juice. End of.”