Today’s minor furore over a painting of Winston Churchill being moved from outside the Greens office has prompted Sam Brooks to consider what other artworks could grace our halls of power.

As I type this, I am looking myself dead in the eyes. That’s because there is an oil painting of myself in The Spinoff office. It sits among our various awards, and several framed prints. I can’t remember why I put it there, and I imagine it’s been there for so long that nobody in the office questions it either.

I’m not comparing myself to the great statesman, but I imagine today’s Winston Churchill parliamentary painting spat began the same sort of way. His portrait is probably something our parliamentarians have walked past many times a day, yet no one’s quite sure why it’s there. Green MP Dr Elizabeth Kerekere, who chairs parliament’s cross-party art committee, confirmed she’d asked to have the painting moved from outside the Greens office to elsewhere in parliament and replaced with an artwork by tangata whenua artist Marilynn Webb, which the committee had already purchased. A spokesperson for Kerekere said the Churchill painting was “a significant work” and would remain on permanent display elsewhere in parliament. Greens co-leader James Shaw told The Spinoff the Churchill painting wasn’t “a great fit for the Green Party kaupapa”.

The Green Party’s hatred of Sir Winston Churchill is born out of a hatred of the western values and freedoms that he fought for: Democracy, Freedom of Speech, Freedom of Religion, Freedom of Association.

The art chosen to take pride of place in parliament can be a fraught subject, but I’m happy to give those in charge some free advice. Here’s a list of alternatives to Winston Churchill the parliamentary art committee could consider when they’re purchasing and exhibiting art (which they do regularly). 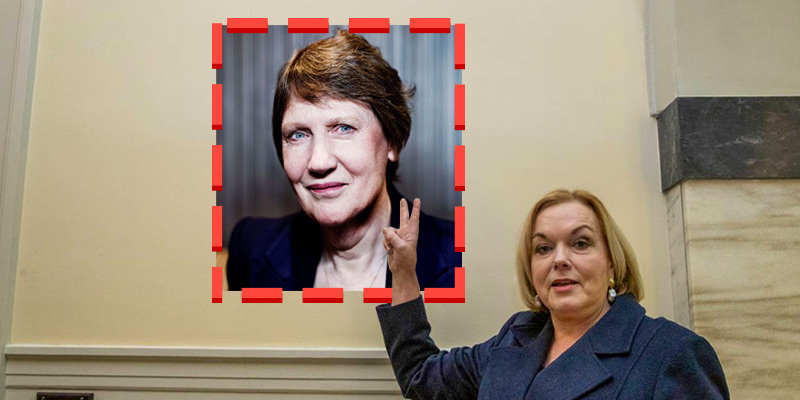 An obviously not real image of Judith Collins and Helen Clark.

This seems obvious! What better way to inspire people to follow in the footsteps of our former leaders than lovely art depicting them? Or, on the flip side, it could inspire people to destroy everything they built and remake it in their own image, depending on what side of the political spectrum they’re on.

That’s what you get with art: differing opinions. Our current prime minister has proved herself to be a competent artist, if not an especially skilled penman, so why not showcase the talents of some of our former leaders? Like this beauty from John Key, or this sketch from Helen Clark (or at least signed by her).

Also known as “bullying in art form”. This seems to be a dying art, so why shouldn’t our left-leaning, art-loving government prop it up? Art is art, whether you like it or not, unfortunately.

Fill parliament with art from our indigenous artists! Give me a good reason why we shouldn’t. (Please don’t.)

A lot of people tour the Beehive. It’s a pretty building. Why not put some real award-winning art in there? (Again, there is a lot of this already there.)

No, we shouldn’t put memes on the walls of our parliaments. But let this be a lesson to all future politicians:

… leave any spare room in a photo that is taken of you.

You’re a politician. Chances are, there are a few people who don’t like you. Some of those people have basic graphic design skills. Join the dots, and plan your photo ops accordingly. 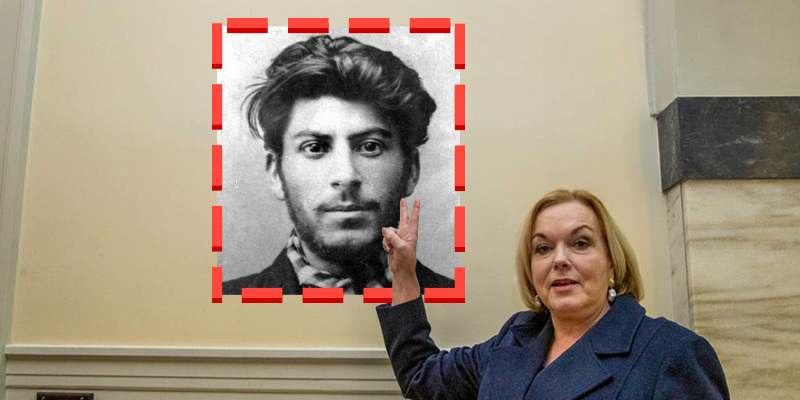 Collins might’ve been onto something when she asked if the Greens wanted Stalin up there. They might! He was way hotter than Winston Churchill.

(Yes, I am aware Stalin is a war criminal. If you have complaints, you can direct them to spam@thespinoff.co.nz).

Picture this: Judith Collins has had a late night at parliament. Being in the opposition is hard, especially when your thumbs are sore from all the tweeting. She’s trundling down the corridor, and in a space that used to house an inspiring painting of Winston Churchill, she sees:

“If you can’t handle me at my worst, you sure as hell don’t deserve me at my best” – Marilyn Monroe.

She grins a Collins smile and cocks a Collins brow at the incorrectly attributed quote, underneath a black-and-white print of the superstar sourced from a Burger King. She keeps trundling along. She does not think of it for a moment longer, because she walks past the damn thing every day. Imagine if, while walking around parliament, our MPs looked at child poverty statistics, the rise in housing prices, or the new climate change report. Sounds dystopian? Yeah, well, so does the rest of the world right now.

It would not just be a handy reminder to our MPs as they walked from meeting to meeting, coffee to coffee, committee to committee, it’d be a reminder of all the more important things they could be doing when they’re stamping around and complaining about this sort of shit.

In saying that, where we place art has meaning. It shows what art we value. Judith Collins has her reasons for valuing that painting of Winston Churchill, and she’s got every right to have them. There may be other paintings that the Greens want there, and they have the right to hold true to their own values. It doesn’t mean they hate the legacy of Winston Churchill (though if I were a betting man…). They just value something else more.

This is a non-issue. Do your damn jobs.