An open letter signed by more than 60 civil society organisations and individuals calls for the government to urgently increase its efforts when it comes to the crisis in Afghanistan. The letter, below, is introduced here by Rebecca Kingi of World Vision and Jo Spratt of Oxfam Aotearoa.

New Zealand has faced its own challenges in recent weeks. Alongside lockdowns, the guiding principle to get us through has been the encouragement from our prime minister to “be kind”. Yet, as we watch Afghanistan’s trauma unfold, it is actions that speak louder than words.

Forty years of war, natural disasters and now Covid-19 have conspired to push Afghanistan to the brink of a humanitarian catastrophe. Perhaps we need to be reminded that the New Zealand government spent 20 years and hundreds of millions of dollars in military expenditure as part of the international intervention in Afghanistan. That half of Afghanistan’s children under five are at risk of severe malnutrition and two-thirds of the country need humanitarian assistance. That there is increasing violence and ongoing reports of abuse of human rights. That the country is experiencing the collapse of basic services. That thousands are displaced, the majority women and children. A Taliban fighter walks past a beauty salon with images of women defaced using spray paint in Shar-e-Naw in Kabul on August 18, 2021 (Photo: WAKIL KOHSAR/AFP via Getty Images)

In an open letter to the minister of foreign affairs (see below), more than 60 civil society organisations and leading individuals call with one voice for the government to increase its efforts when it comes to the crisis in Afghanistan. The call comes as needs grow by the hour, and risks to those on the ground continue to escalate.

The UN Flash appeal on Monday September 13 called for US$600 million to support approximately 11 million people to the end of the year. On Friday last week there was a commitment to $3 million in humanitarian assistance, further to an initial $3 million announced on August 20. The commitment is welcome, however, when it came to the Asian tsunami, New Zealand gave $60 million in new and extra aid.

Governments around the world have stepped up, both in giving as well as preparing pathways of settlement for the thousands in need of safe refuge. Sadly, New Zealand is not among the leaders when it comes to international efforts. Beyond the initial strict evacuation criteria, there has been no concrete commitment to support those fleeing the country in need of refuge. There has been no concrete commitment to support evacuation and resettlement of the family members of Aotearoa New Zealand’s Afghan community. In fact, despite the rapidly deteriorating situation in Afghanistan, it was not considered a priority to expedite visa applications of Afghan family members already in the system.

It is not yet too late for us to “up our game”, and the situation certainly requires it.

Our ask is simple: we say the government must become a leader of international efforts. We need more action on aid and pathways of resettlement. We call for concrete measures to enact the prime minister’s commitment “to reassure Afghan women and girls that we will closely follow the developments in their country, listen to their voices, and continue to support their rights and opportunities”. We also ask that the government drive agreement in the international community to ensure there is accountability, that the crimes and human rights violations across Afghanistan will not go undocumented and unnoticed, and the rights and protections of each individual will be robustly fought for. 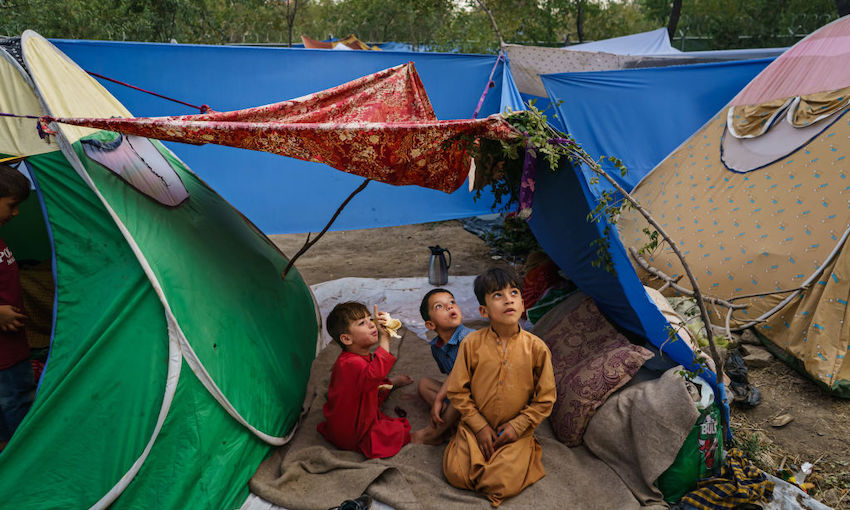 We write to you as a collective voice of organisations and individuals in Aotearoa advocating for the rights and protection of Afghan nationals. We welcome the statements New Zealand has made at the United Nations and the efforts taken to evacuate people. However, more action is needed. As a society that values compassion and kindness, we need to ensure that our response meets the scale of the crisis.

The needs in Afghanistan are growing by the hour. Right now, there are compounding crises taking place, including hunger, displacement, conflict and Covid-19. Basic services are collapsing, and aid is running out. There are ongoing reports of gross human rights abuses. Women, children and those who have worked to promote human rights, democracy and education are among the people most at risk. Urgent action is needed to prevent an even greater humanitarian disaster and to ensure that every individual has their rights and dignity upheld.

We are concerned that, alongside causing anguish, delays in government action and decisions increase risk of harm to those who need aid from, or safe resettlement to, New Zealand. We collectively call on the government to:

1. Urgently increase humanitarian and development support. The government must:

2. Establish and ensure safe pathways of relocation and resettlement for Afghan nationals to New Zealand.

It is essential that the government increases its efforts to listen to, support and provide relief to New Zealand’s Afghan community. We stand with the 6,000 Afghan New Zealanders, many who worry for the safety of their families and neighbours.

4. Lead international efforts. The government must:

Your government is perceived to be one that practises kindness and is committed to collective action for the betterment of humanity, yet other countries have taken significant steps to address the need for international support and assistance, while New Zealand has not. Canada has announced the resettlement of up to 20,000 vulnerable Afghan nationals and the UK has committed to accepting 20,000 Afghan refugees. The US is expected to admit 50,000 Afghan refugees and has set aside a US$500 million fund that will help meet urgent migration needs. European countries and our Australian neighbours are also taking steps. The UN’s Office for the Coordination of Humanitarian Affairs (OCHA) is seeking US$606 million to assist nearly 11 million people during the four remaining months of this year. What is required is an international collaborative effort.

The New Zealand government spent 20 years and hundreds of millions of dollars in military expenditure as part of the international intervention in Afghanistan. We have an obligation to the people of Afghanistan to stand by them now. Be it the provision of aid, or safe pathways to New Zealand, the time for response is immediate and the cost of inaction is high.

We now call on you to do more.

We look forward to hearing from you shortly.